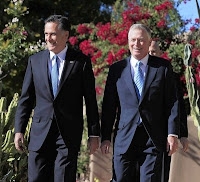 Stupid is as stupid does

My goodness, how we have missed Dan Quayle, the man elevated above his station in life as impeachment insurance by George Herbert Walker Bush. Quayle spoke up this week to endorse Mitt Romney for the Republican nomination for president of the United States. The man who spent four scary years one heartbeat away from the presidency stressed the conviction with which he was backing the former Massachusetts governor. Addressing Romney in front of television cameras and radio microphones, the illustrious former vice president said:

Okay, you got that? Dan Quayle thinks Mitt Romney is all but certain to be the Republican standard-bearer ... and even more certain to become president. That's tricky, since the consequence cannot be more likely than its prerequisite.

Poor Dan is as good at probability as he is at spelling.
Posted by Zeno at 11:30 PM

Maybe he is confident that the Democrats will nominate Romney if the Republicans don't...

... or maybe he thinks even a write-in candidate could beat Obama or Gingrich.

Or maybe Quayle thinks that gaining the Republican nomination will be the harder part, but whoever is the nominee will have an easier time defeating Obama. Not that I agree, but...

Okay, I gotta stop you right there.