Or maybe it's lose-lose

My Uncle Joe was unhappy, sitting in the backyard of my grandparents' home and puffing furiously on his cigarette.

Actually, he wasn't really my uncle. He was married to my grandmother's little sister, so he was my great-uncle by marriage.

His name wasn't Joe, either. It was José, although you're probably pronouncing it wrong in your head. It's not like the “Jose” in “San Jose.” The Portuguese pronunciation of José is zhuh-ZEH, where I'm using zh for the sound you hear in azure. (If you know the International Phonetic Alphabet, it's really the voiced postalveolar fricative ʒ, or so I'm told.)

He was, however, quite unhappy.

It was 1976. Uncle Joe and my great-aunt were in the United States for the first time in their lives, my grandmother and her sister finally reunited after the fifty years since my grandparents emigrated from the Azores. Portugal's bloodless Carnation Revolution had toppled the fascist dictatorship two years before and replaced it with a center-left parliamentary democracy. The new government was gradually bringing Portugal into the 20th century and it was one of the things Uncle Joe was upset about. He didn't care that he and other Portuguese citizens now had more freedom to travel or be involved in politics. He had liked the paternalistic regimes of the late António Salazar and his successor, the ousted Marcelo Caetano. The dictators had been deferential toward the Roman Catholic hierarchy and publicly devout in their religious observances. What were civil rights compared to that?

Uncle Joe was certain that the communists were about to take over his homeland. Even worse, he figured that his eldest son was involved. Ramiro was an officer in the Portuguese army and involved in the MFA (Movimento das Forças Armadas, the “Armed Forces Movement”). The interim MFA junta had displaced the Caetano government and cleared the way for the recent election of Mario Soares, leader of the Socialist Party, as the first prime minister elected under a new constitution. Uncle Joe figured that Ramiro's success in the armed forces meant that his son had gone red—or was at least a pinko.

I decided to cheer up my great-uncle. My Portuguese was a bit limited, but sufficient to make my point to my non-English-speaking relative.

Uncle Joe scowled at me and took a deep drag on his cigarette. He hunched up a bit more and retreated further into his misery. 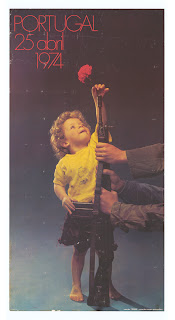 Ramiro had followed his parents to California, using his leave from the army to visit members of the long-separated family. He was sitting in my grandparents' living room, regaling his aunt and uncle with stories from his service in the colonial war in Angola (ended by the MFA's withdrawal of Portuguese forces from Africa after the revolution) and the events in Lisbon at the end of the dictatorship. He was, however, fidgeting a bit. Ramiro's fingers missed the cigarette they habitually held. Smoking was not allowed in my grandparents' home since my grandfather had quit years before. Ramiro would soon join his father in the backyard for a few quick therapeutic puffs. They would not, however, talk politics. At least not where other family members might hear. I have, in fact, no knowledge of whether they ever talked it out, but I suspect they didn't. Reticence is strong in my family.

Uncle Joe is long gone and my cousin Ramiro is long since retired from the Portuguese armed services. Portugal's democratic evolution has continued over the decades and its parliamentary government has seen several peaceful transitions of power between rival parties (although the communists never managed to get a foothold as significant players). Portugal is now a member of the European Union. Uncle Joe would probably have been relieved that his fears never came to pass, although he never seemed to get over his anticipation of impending doom.

I've been thinking about my great-uncle in recent days. I see in his relationship with his son a foreshadowing of the same awkward connection I have with my father. Even some of the words are the same. Uncle Joe used to mutter about the impending communist takeover of his native land. My father says exactly the same thing about his adopted country: “I'm too old to worry about it,” says Dad, belying his overt fears, “but I'm afraid that you and the grandchildren and the great-grandchildren will find yourselves living in a communist state. It's coming.”

“Don't talk nonsense, Dad,” I say, in my most diplomatic manner. “You're being ridiculous.”

He gives me that maddening older-but-wiser look, which I would take more seriously if it hadn't been devalued by overuse. (It's the same pitying look he gave us all when we doubted his pronouncements about the inevitability of finding huge caches of weapons of mass destruction in Iraq.)

At least my Uncle Joe had some basis for his fears. The Communist Party of Portugal was actually one of the post-revolution coalition partners in the interim government ushered in by the MFA. The communists took a shot at seizing greater control and fell short, winning only 13% in the subsequent parliamentary elections. Dad bases his fears on completely spurious evidence churned out by the talking heads of right-wing media and rumors spread by the Internet. Perhaps the Obama administration will eventually quiet his fears, but I have my doubts. Anyway, I'm a liberal Democrat, so I can help watch out for the family's best interest when the Obama administration takes over, right?

I'm sure Dad is not mollified by my cheery optimism. Unlike Uncle Joe and his son Ramiro, my father and I lack the neutral ground of periodic backyard nicotine fixes. Our truce is a bit more difficult to maintain, though we manage the best we can. And we both await the judgment of history, as sure of ourselves as we can be.

You can't imagine how much I identify with you when you talk about your family. I'm Portuguese (living in Spain for the last 10 years) and I too have part of my family scattered around the world, mainly due to the big emigration that happened during the 50's and the 60's. Some of my uncles went to the war in Africa, to Guiné but that was a topic that was never spoken until recently. I guess it was an attempt to forget the hard times spent there.
I remember well the year of the revolution (even though I was quite young then) and specially the following year, when the Communist Party came close to becoming a government.
A few years ago I found a letter from one of my mother's cousins dated from that time (1975) in which she asked my parents to send me and my brothers to live with her (in Connecticut) because she was very much afraid of what could happen if the communists took over. I never knew about that letter until I found it and when I asked my mother if she even considered the possibility of sending us to the US she laughed and said "no, things were never as bad she thought they were. It was all propaganda". I was too young to know if that is true or not, but I do remember living a completely normal life, not even missing school. Well, except for that one day when we could see the troops entering the city from the window of our living room...

You could always try to cheer him up by telling him that if it really did come to pass that the commies took over the US, he and his kind would most likely be put on a boat and shipped off to the old land.

Of course ... I believe the Socialists are currently in power in Lisboa, so suggesting that might just cause him an apoplectic attack.