Once too often to the well 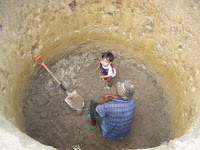 Perhaps you've noticed the unfortunately reflective (and repetitive?) nature of recent posts at Halfway There as your faithful blogger gnaws at his personal obsessions. If you keep complaining about how people keep doing the same damned thing over and over again, you've fallen into the same practice that you've been decrying. Usually I can disguise this unsavory habit by varying the way in which I approach my pet issues. When I gripe about weird students, it's usually about different ones; their peculiarities have potentially diverting distinctions. When I crab about my family's religious compulsions or political backwardness, it can be about a variety of dogmas or domestic issues.

At best, I'm presenting a dazzling series of variations on a theme. At worst, I'm devolving into a curmudgeon. In fact, I am gripped by the dark dread that I am turning into my father. (Insert piercing shriek right here.)

When it comes to Dad, our disagreements are like picking at a scab. Leave it alone, damn it! But am I talking to him, or to me? I tell myself I cannot leave his political thrusts unanswered lest he become smug under the assumption that he has bested me with the strength of his arguments, but I've railed at him without apparent effect.

But perhaps the conclusion of our latest bout is different. (See how hope springs eternal?) There is at least the glimmer of a possibility that this is so. For some bizarre reason, Dad was seized by an impulse to fire a shot across my bow on Tuesday, the very day before I was due to show up at the family farm for Christmas. I say “a shot across my bow,” but I actually believe he was aiming below the water line. He just missed. Not even close. As usual.

I did not dither very long over Dad's e-mail. If I left his sally unanswered, it would be pending business when we met on Christmas Eve, while he strutted about as the unopposed victor. If I returned fire with a withering broadside, perhaps he would refrain from returning to it once we were in each other's company. It was worth a shot (or several shots, as it were).

Dad's e-mail attack was his customary velvet glove affair—more in sorrow than in anger—but between the lines it appeared he thought he was scoring a most telling hit:

I am glad the election went the way it did for you. But I am very, very sad for the future of America. I once lived in a country that had a government of the people, by the people and for the people.

No more now it is rules and regulation by the state and it gets worse every election I still believe in self reliance and self responsibility. I do not expect to be around to see Americas demise.

But it is sad that is coming to pass.

I do not understand why so many people want the government to control their lives and (provide for them) The only way the government can do that is to take from those who achieve. I am forwarding a article that foretells what looks like Americas future.

As always wishing you the best of everything

At heart, it's the same America-is-doomed jeremiad of his previous message. I had demolished that particular missive in gory detail. What profundity was Dad serving up this time for the tender ministrations of my rhetorical carving knife? I was instantly and profoundly disappointed. He was recycling old, old Internet spam from the aftermath of the disputed presidential election in 2000. Lame!

HOW LONG DO WE HAVE?

This is the most interesting thing I've read in a long time. The sad thing about it, you can see it coming.

I have always heard about this democracy countdown. It is interesting to see it in print. God help us, not that we deserve it.

How Long Do We Have?

About the time our original thirteen states adopted their new constitution in 1787, Alexander Tyler, a Scottish history professor at the University of Edinburgh, had this to say about the fall of the Athenian Republic some 2,000 years earlier:

“A democracy is always temporary in nature; it simply cannot exist as a permanent form of government.”

“A democracy will continue to exist up until the time that voters discover they can vote themselves generous gifts from the public treasury.”

“From that moment on, the majority always vote for the candidates who promise the most benefits from the public treasury, with the result that every democracy will finally collapse due to loose fiscal policy, which is always followed by a dictatorship.”

“The average age of the world's greatest civilizations from the beginning of history, has been about 200 years.”

“During those 200 years, those nations always progressed through the following sequence:

Professor Olson adds: “In aggregate, the map of the territory Republican won was mostly the land owned by the taxpaying citizens of this great country. Democrat territory mostly encompassed those citizens living in government-owned tenements and living off various forms of government welfare...” Olson believes the United States is now somewhere between the “complacency and apathy” phase of Professor Tyler's definition of democracy, with some forty percent of the nation's population already having reached the “governmental dependency” phase.

If Congress grants amnesty and citizenship to twenty million criminal invaders called illegal's and they vote, then we can say goodbye to the USA in fewer than five years.

If you are in favor of this, then by all means, delete this message. If you are not, then pass this along to help everyone realize just how much is at stake, knowing that apathy is the greatest danger to our freedom.

WE LIVE IN THE LAND OF THE FREE,
ONLY BECAUSE OF THE BRAVE

True statement enough but ... more so because of the Grace of God.

Pathetic, isn't it? Do you remember how desperately the Republicans worked to try to make George W. Bush's 2000 “victory” look respectable after he lost the popular vote to Al Gore by half a million ballots? They seized upon things like the acreage carried by the GOP candidate. Certainly one's chest must swell with pride at the thought that one's candidate swept the empty spaces of the nation, even while losing all the population centers.

Even on the face of it, this is a very weak message. Democrats won 19 states and the Republicans won 29 in 2000? I thought there were 50 states! Bush carried more square miles? Acreage doesn't get a vote. People do. Professor Olson teaches at Hemline University? What's that—some kind of fashion school? Try Hamline instead. Remember, too, that the original version was issued in the wake of the election of George W. Bush. How much sense did it make to recycle it as a lament concerning the impending inauguration of Barack Obama?

I suggested to my father that he consider doing at least a minimal amount of due diligence before forwarding any further nonsense to me:

Once again, Dad, you don't bother to check the “information” you pass along. This supposedly interesting e-mail is something I saw a long time ago, back when Bush supporters were bragging about the fact that their candidate carried a lot more acreage than his Democratic rival, ignoring the fact that Gore actually got half a million more votes and carried states with high population densities (and therefore fewer square miles). Bush got into office based on the electoral vote, not the popular vote. Furthermore, apart from the numbers concerning square miles, most of the message is a hoax. Professor Joseph Olson had nothing to do with it and the crime statistics it contains are bogus. States that benefit the most from federal spending went to Bush, not Gore. A quick visit to snopes.com would have been enough to discover these simple facts. Check it out for yourself:

You are entitled to your opinion. You are not entitled to your own made-up facts. If you want to share things with me, you could at least take the trouble to check that they're true. You taught me that honesty was a key value but you're constantly falling victim to those who are not. People are sending you lies in your e-mail and you're taking them seriously. It just makes my case for me: Those who are worried that the United States is doomed just don't know what they're talking about. Your fears are baseless. If eight years of George W. Bush didn't destroy us, we're tougher than you think.

The Christmas holiday passed peacefully and uneventfully. The family met for a big dinner, gifts were exchanged, and all was well. Dad didn't mention his e-mail or my refutation of it. He was as nice as could be. Did he (dare I hope?) learn something this time? (At the very least: not to send stupid stuff to his obstreperous eldest son.)

I was on my best behavior, too. When Dad complained about limitations on irrigation water in the midst of California's current drought, I did not say, “Gee, Dad, I think a proud, self-reliant farmer should tell the government where they could put their subsidized water supply. Surely it is a disgrace to depend on the publicly financed state water project.” No, I did not go there.
Posted by Zeno at 2:00 PM

And we admire your self control. :)

I think I will have to use that now and then. Also, my dad is a bit like your dad it seems. Ugh.
Yiela

Never met your dad, but I have two words for him:

A very nice point, Anonymous. I'll have to remember it. (But I predict Dad's reaction will be "Oh, that was a long time ago; that was justified; that was a good idea." Blah, blah, blah.)

Isn't it funny how the "good ideas" like electricity and irrigation are fine, but "bad ideas" like universal health care are just plain EVIL! Having a father similar to yours (never mind my grandfather who was a San Bernadino farmer), I feel your pain as well.