The ends justify the meanness

Those who will not see

A daily devotional is an inspirational reading devised to put a believer in an exalted state of mind for the day. Various religious groups churn out devotionals for the edification of their adherents. The Institute for Creation Research is no exception. The ICR's Days of Praise sprinkles its sayings with generous helpings of creationism. The entry for December 27, 2008, is a case in point. It dredges up entropy, the misconstruction of which is a favorite creationist ploy.

The devotional is attributed to the late Henry Morris, the flood geologist who is ICR's founder. Morris's words are supposed to be inspirational, but notice how aggravating they are: 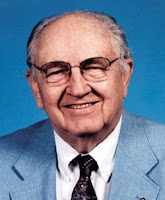 Human life must eventually deteriorate and die; this declension cannot be reversed any more than water poured down on the ground can be “un-poured” up into the cup again.

This principle is the famous law of entropy (“in-turning”). Physical systems wear out; biological organisms get old and die; societies and empires fall and vanish. All these phenomena are local expressions of God's universal curse on man and all his dominion (Genesis 3:14-19). It applies to everything, without exception.

What was your reaction to the spilled water? Mine was the obvious one: Water does not stay spilled. It evaporates. The “un-spilling” is a leisurely but well-understood process. I smirked at Morris's obtuse analogy, but my jaw dropped when I continued reading. The next paragraph was the usual contrived Christian apologetics, but the one after that was stunning. Observe:

However, the very existence of the law of entropy points to a Creator, because systems that are wearing out must first have been made new, and beings that die must first have been given life. The very idea of a universal naturalistic evolution of all things into more complex systems is contrary to all real scientific data and is contradicted by all human experience.

Nevertheless, the God who created all things can surely “devise means” by which the law of decay can be set aside. Solar energy and the hydrologic cycle can raise the spilled water; the sinful life can be purified by God's grace and the blood of Christ; and the dead can be revived by the resurrection life of Christ.

Morris admits to the existence of the hydrologic cycle, but waves it off as God's little miracle for raising spilled water. He impresses the sun into service as the deity's magic engine (although he never deigned to notice the sun back when he argued that evolution was impossible because of the second law of thermodynamics). He hijacks a perfectly naturalistic explanation by imputing it to the hand of God. No doubt the law of gravity is just a metaphor for God's arduous labor of pushing the planets around their elliptical orbits.

There is a lesson for us in this installment from Days of Praise. The creationists are impervious to reason. If no natural explanation is known for a phenomenon, then God did it. If a natural explanation is known, then it is merely God's means for accomplishing his ends. It's a win-win technique for creationists while being lose-lose for rational thought and science.

How inspirational.
Posted by Zeno at 6:00 AM

The creationists are impervious to reason.

When I saw the "spilled water" quote, my first thought was that it goes into the groundwater and gets pumped back out into someone else's cup. It's actually much more likely to evaporate.

Henry Morris and his followers fascinate me because a number of them have genuine degrees in scientific disciplines from real universities. Talk about willful suspension of knowledge on a grand scale! It strikes me as being much more difficult than simply staying willfully ignorant. How do they do it?

Yes, the loving god and his "universal curse on man and all his dominion"... Wow, our dominion is pretty huge, isn't it? It extends to galaxies we can't even see!

If a second-law-misusing creationist got together with a "free energy" perpetual motion believer, would they cancel out? Or mutually annihilate? And how can we arrange more such meetings?