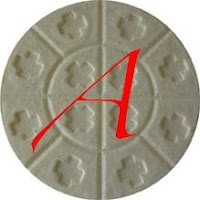 In the touchy-feely decade of the seventies, just when the experimentation inspired by Vatican II reached a peak, the Newman Center associated with my university was celebrating communion under both kinds (bread and wine) by passing around a basket of bread and a clay chalice of wine. The bread was a loaf from which communicants tore a fragment before passing it along to the next recipient. It was all very low key and natural.

I haven't been a communicant since the eighties, so I'm not completely up to date on current practice, but I have been aware that the casual practices of the seventies have increasingly been stamped out. Traditional Catholic standards for communion demand unleavened wheat bread (sorry, gluten-sensitive Catholics; all hosts contain at least some wheat gluten, but you can offer up your suffering as penance).

Although there are multiple sources for ritually correct communion wafers, the biggest contemporary supplier of holy bread is the Cavanagh Company of Rhode Island. The Cavanaghs are Catholics, but they sell their wares to various Protestant denominations as well. The New York Times featured the Cavanagh Company in its Christmas Eve edition with an article carrying the byline of Katie Zezima. She quotes the company's general manager, Andy Cavanagh, making a statement that is doctrinally correct, but potentially provocative as well. In the absence of a sharp retort from professional Catholic bully Bill Donohue, it may be that Andy will not be struck down by righteous wrath:

“We feel as though we’re a bakery, and all we’re making is bread,” said Andy Cavanagh, the company’s general manager, and part of the fourth generation of Cavanaghs to work here. “It’s not that we don’t have respect for what happens to it, but that transformation is out of our hands and takes place in a church. The best thing we can do is make sure the bread is perfect in every way possible.”

It's just a business, folks. It's not Jesus until the priest puts the magic in. Of course, it still looks like bread, tastes like (not very good) bread, and digests like bread, but it's Jesus until you've assimilated it (and no later than that, since we can't very well have people pooping Christ; that would be disrespectful).

Even non-Catholic customers praise the Cavanagh Company's wafers, although they don't believe that it ever really turns into Jesus, as most (just barely) Catholics do:

Some customers say the Cavanaghs have such a big market share because their product is about as close to perfect as earthly possible. “It doesn’t crumb, and I don’t like fragments of our Lord scattering all over the floor,” said the Rev. Bob Dietel, an Episcopal priest.

Indeed not. If Jesus were scattered all over the floor, we'd run the risk of stepping on him and showing him the shoe-sole disrespect that is properly reserved for George W. Bush. 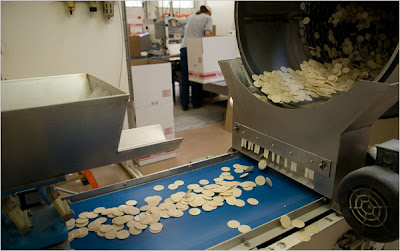 Interesting. I went to a few sites and then ordered a bag of 500 of small altar breads.

Don't know why exactly but mostly because I didn't know I could - so I did.

My experience with leavened bread at Mass came a bit later than yours, but was a tad more personal -- somebody at my church talked me into being on the baking crew. It was a sweet egg bread that was quite tricky to bake completely inside without burning the top. I made it once, got it right(!), and then bowed out of the baking rotation on some flimsy excuse; I figured I'd used up my beginner's luck on that first batch.

The church could have bought a more consistent product at the local bakery, but I guess having the bread home-baked was part of the appeal: Jesus with an extra helping of TLC.

Karen, that's pretty much the reason, though it's usually expressed in not-quite-so-cutesy language. There's a wide range of openings to foster greater direct participation by members of the community in the liturgy. Sure, the result isn't always as professional (though most parishes don't use a very tricky recipe) but going to a local bakery wouldn't be as spiritually productive. Or so goes the thought.