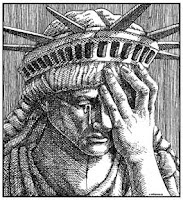 I beg to differ

Brian Wolff is just doing his job as best he can, spinning congressional capitulation to the Bush administration on continued funding for the war in Iraq. Brian, you see, is executive director of the Democratic Congressional Campaign Committee, and he was hoping I would send him some money for future Democratic campaigns. He sent me an e-mail message crowing about how House Democrats had clipped Bush's wings. He spun it really hard:

Breaking News: Because of your help, the House just passed legislation that will go to the White House that includes critical issues Democrats have been fighting for including: canceling the President's blank check in Iraq, raising the minimum wage, and increased funding for military health care and veterans' benefits, and help for victims of Hurricane Katrina.

THEN:
Two weeks ago, President Bush vetoed our legislation to demand accountability in Iraq and declared he would only sign a bill without any accountability for his management of the war.

NOW:
Now, the President has agreed to accountability and reporting provisions. That means for the first time we can force the President to be held accountable for his endless war in Iraq. We canceled the President's blank check in Iraq.

Begging your pardon, Brian, but I know what a canceled check is. A canceled check is one that's been cashed by the recipient, as Mr. Bush will soon do with a stroke of his pen. The word you wanted was “voided”; now that would have been good. But you did not void the president's blank check. You cashed it for him.

And, in direct consequence, you won't get a check from me. Instead, I'll send my contributions directly to Democrats who voted against the supplemental appropriations bill to continue the Iraq war. All that other stuff in the bill? Mere window dressing. The real bottom line is that the new majority in Congress is bending to the president's will like the old Congress. Hence no rewards to the corporate body of Democrats.

Only to those who stand for something.

Jack Murtha, who voted in favor of the appropriation despite prior vigorous opposition to the war, is saying that the true test will come in September, when funding runs low again. That just means waiting until a few hundred more American soldiers are killed in various ways. Silly me, to be so impatient. I must have mislaid my statesmanship somewhere.
Posted by Zeno at 11:30 PM

Yeah, September is a fake event fluffed up by Conventional Wisdom Hacks. By then we'll be in the middle of a second surge and we'll 'need to wait another Friedman to see if we've really turned a corner', or if we'll need a dozen more Friedmans after that.

Besides, there's already $140 billion in the Real Budget for fiscal '08 to keep the meat grinder churning after September, even if we 'de-authorize' or pass 'non-binding deadlines'.

Until enough people tell enough Republicans to cut it out, this is what will happen. The Dems do not have a veto-proof majority especially with Johnson sick and Lieberman living the lie of voting Democratic, and the House is not in much better shape. Bush can keep on until the GOP in Congress stop enabling him. That said, I hate that Dems voted for this. At least one more veto would have been good.

I keep reading that the reason the Dems gave in is because they did not have a veto proof majority. This is bull! The Dems did not have to submit a funding bill at all. That would have defunded the war. This veto talk is a smokescreen to cover their shameful actions.

I agree with CapnDen - they should have either sent nothing, or sent the same bill Bush vetoed before. These cowards capitulated. I am only going to send money to candidates who voted against this bill.

The Democrats completely capitulated to President Bush and failed to enforce the mandate of the people who put them in power in the last election. These gutless wonders have agreed to finance the deaths of more Americans and more Iraqis, and done NOTHING to fix the gaping hole in national security caused by the over-extension and wanton abuse of our military.

The only thing for which this is "the beginning of the end" is their political careers. The American public wants out of Iraq, and if the current Democratic Congress can't do the job, we need to find someone who can. All this political ass-covering is pathetic.

I received a letter from the DCCC Friday. I used the postage-paid envelope to send them a note stating: I am cutting off your funding until you cut off funding for The Naked Emperor's Global Folly.