Wally Schirra was my favorite Mercury astronaut. While Alan Shepard was first to fly and John Glenn the first to orbit, Schirra made a special impression when he flew the penultimate Mercury mission in a six-orbit flight in October 1962. Of the seven original NASA astronauts, Schirra always projected the most upbeat attitude. He loved being a spaceman. Schirra was unique among his Mercury colleagues as being the only one to fly on all three of NASA's first manned vehicles: Mercury, Gemini, and Apollo.

Four of his astronaut colleagues had been assigned to missions before him. Schirra was given the job of summing up Mercury's achievements by piloting an engineering shake-down flight. He was going to double the duration of Glenn's and Carpenter's three-orbit flights and set the stage for Cooper's concluding 22-orbit marathon. He dubbed his Mercury space capsule Sigma 7: 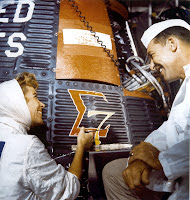 “Since this was to be an engineering evaluation,” he explained, the name chosen for capsule No. 16 was that of an engineering symbol for summation, Sigma, with the number seven added to it for the seven-member Mercury astronaut team. “Thus,” he said, “was derived the name and symbol that was painted on the spacecraft, Sigma 7.” [This New Ocean: A History of Project Mercury, Swenson, Grimwood, & Alexander (1966)]

While Schirra's quote from NASA's official history rings a little false in its high-toned diction—and it's funny to hear the summation symbol attributed to engineering rather than to mathematics—the sentiment hits the right note. Schirra was NASA's clean-up man. 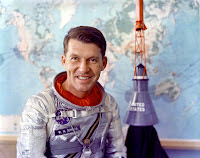 Just as the successful flight of Sigma 7 provided a test run of upgraded Mercury systems in preparation for the program's conclusion, Schirra's later Gemini 6 mission was a pioneering experiment in orbital rendezvous. First Schirra saved the entire mission by not automatically hitting the eject button when the first launch attempt scrubbed. A few days later, the launch was successful. Once he and Thomas Stafford piloted their Gemini spacecraft to within a few feet of Borman and Lovell's Gemini 7, NASA knew that the basic plan for orbital rendezvous was feasible for the Apollo moon landing program. NASA also learned to keep a closer eye on its astronaut's personal effects, since Gemini 6 was the first space mission to feature a corned beef sandwich as an in-flight meal, smuggled aboard by a mischievous Schirra (who found something lacking in NASA's paste-based cuisine).

In the Apollo program itself, Schirra commanded the crucial Apollo 7 flight in 1968. More than a year after his Mercury colleague Gus Grissom and crew had died in a fire on the Apollo 1 launch pad, it fell to Schirra to rebuild confidence in the manned spaceflight program. As usual, Schirra delivered, as he and crewmates Eisele and Cunningham flew a textbook mission. The redesigned Apollo capsule passed muster and on its very next flight took Borman, Lovell, and Anders to lunar orbit on Apollo 8.

Apollo 7 was Schirra's last flight, bringing his personal record to nearly 300 hours of flight time. It was by no means a record among his colleagues at the time (Borman and Lovell had clocked a full two weeks in orbit during the Gemini 7 flight alone), but it was a record of distinction. Schirra was there at every key moment of the space program's progress toward the 1969 moon landing, in Mercury, Gemini, and Apollo.

In my peak space-geek years in high school, I assembled several model spacecraft from the Revell catalog of scale miniatures. When it came time to apply the finishing touches to my Mercury capsule, I naturally picked out the decal that bore the Sigma 7 logo. That was how it all added up.
Posted by Zeno at 7:30 PM

I recall a time when Wally did TV ads for some cold-relief drug, when my father told me that Schirra was a miserable S.O.B. because, while on a mission, he said he was too busy to bother with a down-link broadcast to the people of the world (or, the U.S., anyway) -- whereas all of his colleagues had happily played along. Does this bear up to your recollection, or was dad making stuff up?
TR
PS -- Be careful what you say about my dad. I'll come after you.

Schirra and his crew came down with head colds during the Apollo 7 mission, but completed the mission successfully with the assistance of Actifed. When he retired from spaceflight, Schirra signed on to make ads touting Actifed.

Your father's recollection is not completely amiss, although I would say it's not entirely fair to Schirra. He was a very task-oriented astronaut and chafed at the interruptions of NASA's p.r. people, who wanted Wally and crew to do a happy-talk live telecast when they still trying to complete their mission checklists. Schirra really didn't like those "Hi, mom" moments on the videocam and felt they were given too high a priority. NASA, of course, knew that people were eager to see live telecasts from orbit and would be more likely to support the space program if they got what they wanted. Schirra understood this, but was always much more willing to do p.r. stuff when on the ground and not during what he considered critical mission phases. For example, check out this posed pic of Schirra and his Apollo 7 crew decked out as flyboys with long white scarves and Schirra himself behind the wheel of a Corvette.

Pedantry: Grissom flew on Mercury and Gemini, and would have flown on Apollo if he hadn't died in Apollo 3.

Yes, halojones-fan, Grissom was slated to fly in Apollo. I did know that. My point was simply that Schirra was the one astronaut who really did go into space in all three spacecraft.

While you're being pedantic, though, you might want to correct your recollection. Grissom was the commander of Apollo 1, which burned on the pad. Apollo 3 was an unmanned mission.