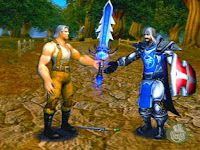 Colonel Dill, born in Tennessee, veteran of the Civil War, age 66. Habitually in need of money, and eager to imbibe any amount of whiskey at any other man's expense. Hobby, imaginary bloodshed.

Except for that bit about being a veteran of the unpleasantness of the 1860s, Colonel Dill seems a literary archetype of today's Republican chickenhawk. A character in The Time Stream, a science fiction novel by John Taine (Eric Temple Bell), Dill enters the time stream of the title and experiences an existence in another time and place where he gets to indulge his appetite for imaginary bloodshed by perpetrating an extinction event on all the other inhabitants of the planet. Dill is the only survivor. 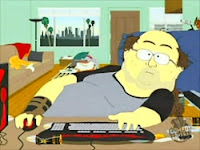 Fantasy conflict is quite popular today. Colonel Dill would feel right at home with the war-bloggers of the brave 101st Fighting Keyboarders. Protected from military service by the absence of a draft and an unwillingness to risk their own lives in a battle they otherwise enthusiastically support, today's chickenhawks are a mixture of Vietnam era dodgers (e.g., Cheney, Rove, Wolfowitz, Perle, Kristol, Feith, Limbaugh) and their cosseted children. President Bush isn't the only war enthusiast whose adult children have managed to find other things to do than enlist in the Great War on Terrorism—so perhaps it's not such a big deal after all, except perhaps to those whose children are doing the actual fighting and dying.

Now, however, comes a great opportunity for war fans to involve their children without any actual risk. Yes, it's war camp! Thanks to Lt. Colonel Oliver North, who is not even an ex-con (because his felony conviction was overturned on the sort of technicality that right-wingers normally disdain), your teenager can spend the summer roughing it in military barracks and doing some basic training—without actually doing any military service at all.

“Friends of GOPUSA” sent out an e-mail solicitation last week to all of the people on their mailing lists. Imagine my delight at seeing how my teenagers (if I had any) could enjoy part of the summer (see the smiling faces on the kids in the promo pics) with Lt. Colonel Howdy Doody (see the promo pic) and a minimum of race-mixing (see the promo pics again; I'm sure an African-American kid would be considered for admission if one ever actually applied). The good people at the Freedom Alliance Military Leadership Academy want you to know that the graduates of their summer program have numerous post-Academy opportunities: “Many have pursued careers in the military and as DOD civilians, such as the Navy Criminal Investigative Service, while others go to college or directly to the workforce.” I wonder how many actually enlist in the armed forces. I'm sure it was only an oversight that they weren't more specific. No doubt summer war camp is convenient for those who become “DOD civilians,” where they get to move actual military personnel around like toy soldiers while experiencing no personal risk to themselves. That's a great tradition in the Bush administration Pentagon.

Check it out. I'm sure you'll rush to sign up your children and grandchildren.

Please direct comments regarding this message to the contact information below.

LtCol Oliver L. North, USMC (Ret.) and Freedom Alliance are seeking high school students for our 2007 summer Military Leadership Academy (MLA) -- a unique and exciting opportunity to LIVE, EAT and TRAIN with our U.S. military personnel at some of the pre-eminent U.S. military bases:

June 19-23: Blount Island Command, Jacksonville, Florida
This base is the home of the United States Marine Corps Prepositioning Program.
Students attending this Academy may also spend time at the region's other bases including Naval Air Station Jacksonville and King's Bay Submarine Base.

Students at this academy will negotiate the Marine Corps Obstacle Course, spend one day each on Navy surface ships, submarines and aviation and much, much more...

The week-long Military Leadership Academy is an awesome adventure and a once-in-a-lifetime experience for motivated and determined high school students, ages 15-18, who want to gain practical leadership skills - and have fun learning from real-life American heroes.

The student tuition fee is only $399 and covers all meals, lodging, all training materials and all required equipment, ie., flashlights, uniforms, sleeping bags, tents and more.

The MLA provides young Americans with a taste of military life and teaches them leadership principles, along with the core values of Selfless Service, Teamwork, Courage, Integrity, Dependability, Responsibility and Respect to help them become positive, productive citizens.

If you have a son or daughter; or grandson or granddaughter who may want enjoy the unique and exciting experience that IS the FREEDOM ALLIANCE MILITARY LEADERSHIP ACADEMY, forward this email to them, or have them contact:

The Freedom Alliance Military Leadership Academy's highly structured training environment teaches young Americans how to set and successfully accomplish goals, the importance of a physically fit, drug-free lifestyle, the necessity of teamwork and the value of service to a cause greater than one's self.

Academy graduates are highly motivated, physically fit and goal oriented. Many have pursued careers in the military and as DOD civilians, such as the Navy Criminal Investigative Service, while others go to college or directly to the workforce.

The MILITARY LEADERSHIP ACADEMY: There is nothing like it!
SPACE IS LIMITED

"Since our first Academy in 2001, Freedom Alliance has held Academies on military bases across the country and inspired hundreds of youngsters to work hard and follow their dreams. Some are pursuing careers in medicine, law and education, while others have chosen to continue their leadership training by serving in the United States Armed Forces.

Please support our Military Leadership Academy with your most generous tax-deductible gift today. Thank you!"

Help TRAIN the next generation of American leaders today! Click here to make an online tax-deductible contribution to the Freedom Alliance Military Leadership Academy.
If you would like to make your donation by telephone, call (800) 475-6620, or you can mail it to:

Sure, Hitler Youth, a Militarized Boy Scouts, and Soviet Young Pioneers, these are easy analogies. What all such organizations seek is to mold young minds along certain prescribed tastes and to embrace authority and regimentation.

If the program is successful, the kids join the military with their own prefab cabal or network or at the very least they vote Republican, and support war as a foreign policy and domestic policies that erode individual liberty + civil rights.

Talent searches will be conducted, profiles compiled. The mind boggles at what possible uses a crook like North will put this cadre to.

A whack job conspiracy theory or a reasoned, educated guess? You decide!

And of course, the future leaders in question can claim that they thought that this was a valid form of military service. And even then they'd still have done more for their country for Shrub.

Didn't disgraced Lt. Col. Ollie North sell missiles to our sworn enemy, Iran, and then sent the profits to the Contras who massacred and raped their way through so many elementary schools and convents in Central America?

I remember when traitors like Ollie were tried, hung and shot in the town square.

Ah, the good ol days of democracy. I miss 'em.

I would hope a math professor would look for the positive aspects of these future leaders rather than ridicule them.

Do you by chance know how I can invest in a company that manufactures black burkas? About 150 million American women will be needing them soon. I'd like to get rich before I have to wear mine. (Yes, I'm a dreaded Republican capitalist.)

If these kids become "future leaders" under the influence of creeps like Ollie North, I'd prefer that they stay home. If you think folks who subvert our nation's government are saving us from becoming some kind of Islamic republic, then you're a fool in addition to being a Republican. Strange to say, that's not yet a redundancy, even under the gross incompetence of the Bush administration.

Zeno, I have no doubt you're a Democrat. You've got the cynicism, name calling, and Bush-bashing down pat, and your lack of a sense of humor nails it.

I doubt Ollie has much to do with the camp other than lending his name to its promotion. Even if he does, I doubt those kids have a clue who he is other than a guy who has a cable TV show that no one watches. I am not an Ollie fan. A friend of mine was assassinated in El Salvador while we were mucking around down there, so that era was a nightmare for me.

Anonymous #1 immediately started calling the kids Hilter Youth, etc., as if everything they have learned in their short lives will be replaced in one week by Evil Ollie.

Anonymous #2 wants North hung and shot (a bit of overkill, no?) in public. Sounds more like Iraq under Saddam than the US to me, but I'm used to two-faced liberals. Peace and love unless someone disagrees with you; then kill the bastards. Wonderful, just wonderful.

Those kids don't look like skinheads to me. They apparently are bright enough to want to challenge themselves mentally and physically for a week, so why not give them the benefit of the doubt? They are kids who are willing to give up their video games for a week to experience something new. They are probably our future teachers, cops, and EMTs, so I think they should be applauded for looking outside themselves and learning about leadership and service to their country and community. I wish we had a million truckloads of them, but I doubt we do.

Thank God (er should I say Praise Allah) we still have American hating, communists like you to keep our youth from going astray!
Please forward your resume' to Hillary - she'll need you in the next few years! You're her kind of (wo)man !
You make Hitler and Stalin proud - keep up the good(?) work.
Hug a Tree - Kill a Baby ...
PS - Please tell Madelaine Murray O'Hare you said hi!