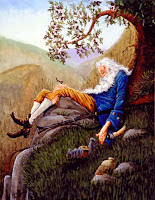 I knew he would be there. No, I'm not psychic, but I knew. No doubt at all. And there he was! Sitting in the back of the room. Boy, did he look disoriented! Was it because he hadn't seen the inside of the classroom in so long? Could that have been it? Certainly possible. It had been weeks since he had bothered to grace us with his presence. The classroom could well have been foreign and rather frightening to him. But, no, that was not the reason he was looking bewildered.

He was wondering where the exam was. The course syllabus clearly said that an exam was scheduled for today. He had missed Monday's class when I announced the postponement. He had missed Wednesday's class where everyone was reminded about the postponement. He had strolled in expecting to find me handing out an exam and instead I was leading the class through a discussion of the topics of the last two chapters and clarifying the technique of Lagrange multipliers. The time is out of joint; O cursed spite, that ever I enrolled in a calculus class out of sync with its syllabus!

I think he was miffed. Here he was, using an hour of his precious, precious time to sit through a class when we weren't even taking an exam. Drat! He slumped at his desk, clearly uncomfortable. (Well, we could blame the furniture for that. It's not that comfy.) He's one of the students I permitted to add the class after the first week of the semester. Why do I bother to let such students in? As I've noted before, they never do well.

The hour came to an end and students began to bustle out. I called my sporadic student by name and asked to speak with him a moment. Perhaps he was startled that I remembered his name, but he slouched forward and stood next to the lectern.

“Can you think of any reason why I should not drop you from the class? I haven't seen you in weeks. Why didn't you drop?”

Now he was really startled. He stammered out an answer:

“I wanted to come! I tried but I couldn't. Really. I've been studying and keeping up and everything!” (I wonder what he thinks “everything” entails in this context; certainly not attendance or handing in assignments.) “I've had emergencies that I've had to handle. Last night I was up late in San Francisco, but I studied all night to be ready for the exam.”

I offered some sweet reasonableness:

“I know that sometimes students have emergencies, but I expect them to inform me when it interferes with their classes. I haven't heard from you either by voice mail or e-mail all the time you've been gone.”

“Well, I couldn't really get in touch. I've been sick. It's affecting all my classes.”

“If you're not attending any of your classes, you should consider withdrawing and enrolling again when circumstances are more settled.”

“But these are classes I need!”

“If you actually need them, you should actually take them. I can drop you from this class for nonattendance and probably should, but I'll expect to see you on Monday for the exam and each class day thereafter. Understand?”

He hustled quickly away without giving me a direct answer. I do expect to see him on Monday. I don't expect him to do well on the exam, even though he inadvertently got to sit in on an extra review session. He won't be in class on Wednesday, at which point I will drop him.

This has been another episode of Bend Over Backward Theater. The continuing saga.
Posted by Zeno at 9:00 PM

As much as we hate doing the song and dance for their sake, we continue doing it nevertheless because we're educators who want our students to complete their education and to do well in our classes. It's a constant struggle but it comes with the territory. Try focusing equally on your brightest students for some relief.

Well, actually I don't really get the principle of mandatory participation on college-level and up. I have an exam in a couple of weeks, and I certainly haven't been to class (kinda hard with a full-time job). If I don't pass because I'm not well enough prepared, that's fair enough, but because of lack of participation? Not so.

Kristjan, it's not exactly mandatory participation. It's just that if you're not there you're probably not going to learn the material. (The very rare exceptions can usually fend for themselves.) You're going to miss quizzes (which figure into your grade) and you miss Q&A on the topics. In theory, a student can "challenge" a class and arrange to take the equivalent of a final exam for a give course; pass that and you get your academic credit. In practice, it seldom works.

Also, students who can't be bothered to show up for regularly scheduled classes should enroll instead in our self-paced math lab, which is available for all of the low-level courses. If they sign up for my lecture class, I expect them to show up. If they stop showing up and I don't hear from them, I drop them from the roster, which they're just cluttering up. I try to meet those with work or family problems part way, but if they can't come to class I don't want them enrolled in it. If I take attendance too casually I am countenancing failure, since that is my everyday experience as a community college teacher, especially since a lot of what I do isn't exactly "college-level".

As for Rip van Winkle, who is enrolled in calculus, I suspect he's a goof-off rather than a hard worker with a full-time job. Just guessing here.

Who are you calling a hard worker? [winkie thingie]

No, I agree, but I am used to a much different system that the US system (no quizzes for one thing, though there are mandatory assignments in some subjects).
On the other hand, I make sure to get all the relevant information, so I don't end up in the situation described.

Every semester I tell my students that I don't care if they come to class. My job is not to make them pass the course, but to present the material in such a way that it's easier to learn. They can listen to me, they can read the book, they can ask the genius down the hall, they can channel it from the stars -- I don't care.

The flip side is that it's their job to pass the exams. I have failed students before and I have no compunctions about failing students again. I want them to learn and pass, but it's not my problem if they don't. Interestingly, I don't get as many complaints as the instructors who try to befriend their classes...

I had a class in second year (dynamics, usually one of the tougher second year mech eng courses) where the prof was an idiot. Well, maybe not an idiot, but had no practical knowledge of anything. He thought that fluids flowed from low pressure to high pressure. And argued with us about it for 10 minutes in front of the chair of the department.

Anyway, the point is that the people who attended that class regularly all did very badly, while those who never showed up and just learned from the books did quite well.

I showed up. I nearly failed. I probably would have done better if I had just written the exam at the beginning of the term, just based on my previous knowledge, before my brain had the chance to be corrupted.