The joy of plagiarism 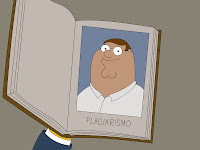 Some words and notes

My colleague suspects that his student's geometry essay is not entirely the student's own work. The essay bears the title Pi in the Sky and is a peculiar pastiche of recognizably reasonable snippets with swatches of utter incomprehensibility. Well, judge for yourself:

Pi in the Sky

Between the 17 and 18 centuries, geometry remained in the war against the empiricism. The Greeks had studied about geometry that was certainty offered by Euclidean's did in nineteenth century. Euclid stated axioms about rigorous, theorems, circles, and squares in the nineteenth century as well. His wording had an effect of curiosity in schoolchildren such as language even Bible. Students used rules, paper and compasses to draw. Euclid intuition started by drawing figures in the sand and inspecting the relationship in between angles, lengths and shapes.

A self-evident "truths" of what he saw on he flat ground was idealized into postulate. Euclid's geometry edifice most singularly is postulate is that parallel lines never meet. Euclid' geometry under-girded all architecture, artistic compost ion, even astronomy. Another master of geometry in motion and gravity was Newton, which had an effect of hallmark in the seventeenth-century. The certainty of Newton's clockwork was abstracted into many other realms such as human behavior. In the seventeenths and eighteenths, were arguments about the existence of God upon the mathematical certainty of the geometrical laws of Nature that Newton had reveled.

Euclid gave as an example of synthetic knowledge.

In Britain Euclidian geometry was the exemplar of particularly British way of thinking. For mathematician Euclid's discovery wasn't very clear or stated, therefore there were views about human knowledge. In a dispute sequence of event was realized that Euclid' s geometry as a possibility of many. Euclid' s postulate wasn't true parallel lines never meet. Non-Euclidean had prejudices and beliefs as the ideas of Charles Darwin theory of evolution. Euclid's geometry remained unchallenged.

In 1915 Einstein came out with his theory gravitation. With Einstein theory, Non-Euclidean geometry was distinguished. Euclid's assumptions found a parallel in the development of new algebras. When actions A were followed by action B, the result was identical with what followed from first doing B and then A.

Another Mathematician William Hamilton constructed a logically complete and consistent algebra for objects defined by a set of rules which were not commutative. Non-Euclidian geometry showed that there could be axioms which would lead to a set of values counter examples counter to the accepted authority in any sphere of human affairs.

The only thing that's completely clear to me is that the student had access to a spell-checker. I'm sure that's how “compost ion” got into the essay, probably in lieu of “composition.” the sentence “Euclid's assumptions found a parallel in the development of new algebras” strikes me as a pure lifting of text from another source. It contains a dash of inside humor with the use of “parallel” (clearly outside the scope of the student's understanding) and points toward noncommutative algebras, hence the subsequent citation of William Rowan Hamilton (and his quaternions; but the student didn't borrow enough text to get that far).

My colleague says the student has perfectly adequate English skills in oral communication, so it's not simply a language barrier. I suspect the actual problem is the student's unskilled effort to rewrite enough of the source material so as to make it his own. In avoiding direct word-for-word plagiarism, he's created an indigestible casserole of overcooked leftovers.

It's the same old song

As a math teacher, I seldom have to worry about plagiarism in my students' work. (That's the sort of thing that my colleagues in English fret over constantly.) On the other hand, the music industry has long been obsessed with the theft of intellectual property, but mostly in terms of uncompensated downloads of copyrighted material. Plagiarism? Not so much. (Although there is the notable exception of George Harrison's My Sweet Lord versus The Chiffons' He's So Fine.) And, of course, there's all that “sampling” going on that involving inserting bits of other compositions into supposedly “new” works.

Thank goodness that this sort of thing is not a problem in classical music, right?

Would that it were so! Clutch the pearls, dearie, and peer through your lorgnette at this: As reported by Denis Dutton in the New York Times, the career of a celebrated classical music performer is nothing but a bunch of false notes!

Earlier this month, a reader of the British music magazine Gramophone told one of its critics, Jed Distler, that something odd happened when he slid Ms. Hatto's CD of Liszt's “Transcendental Études” into his computer. His iTunes library, linked to a catalogue of about four million CDs, immediately identified it as a recording by the Hungarian pianist Laszlo Simon. Mr. Distler then listened to both recordings, and found them identical.

That's because they were identical. Pianist Joyce Hatto had revived her career by shamelessly expropriating the recordings of obscure young artists and passing them off as her own. With the cooperation of her husband, recording engineer William Barrington-Coupe, Hatto produced an incredibly rich stream of “new” performances for their private-label CD company. It was all theft and deception.

Their boldness knew no bounds:

Her concerto recordings are even more brazen. The CD labels say they were made with the National Philharmonic Symphony Orchestra, always conducted by one René Köhler. Mr. Barrington-Coupe told a reporter that this was his name for a pick-up orchestra of Polish émigrés whom, he said, came out from London to record at a venue he now refuses to reveal. He declined to further discuss the orchestra on the grounds that they were employed “below union rates.” No one has yet been able to find a single reference to this René Köhler outside of the Joyce Hatto recordings, nor have any members of the orchestra come forward to confirm Mr. Barrington-Coupe’s story.

It sounds to me as if the mythical conductor of Barrington-Coupe's supposed pick-up orchestra was inspired by a glance at tenor René Kollo's name on the cover of a recital CD.

There is an amusing coda to this story, which is still unraveling at this point, as the artists ripped off by Hatto and Barrington-Coupe continue to be identified. Just as English professors increasingly turn to high-tech browsers and file-comparison software to sniff out plagiarized composition papers, these stolen music performances were identified by the on-line database linked to iTunes. The friend who brought the story to my attention sums it up nicely:

“I love the way the modern digital world makes it so easy to plagiarize, and yet so easy to catch it, too.”

For more details on the Joyce Hatto plagiarism scandal, see the audio archive at Pristine Classical, which offers several files documenting the purloined performances. A recent addition is “I Did It For My Wife,” the confession of William Barrington-Coupe, in which he claims that his wife was not complicit in the deception.
Posted by Zeno at 11:00 AM

A recent addition is “I Did It For My Wife,” the confession of William Barrington-Coupe, in which he claims that his wife was not complicit in the deception.

That was actually my first thought when I read the initial story. It wouldn't surprise me at all.

This is almost too funy to be sad.

It reads somewhat like the "Summarize" text service on the Mac.

That essay reads quite a lot like the submissions I'd get from my native Chinese-speaking students in my writing courses. That is probably a coincidence, but there are some peculiar syntactical markers that make it look that way.

I never liked using services like turnitin.com; they'd catch perfectly well attributed quotations as plagiarism matches, when neither the match nor the paper I was evaluating had plagiarised the text in question, just quoted the same material. I did discourse analytics in grad school; I really don't need a computer to tell me that my student doesn't sound like him/herself when s/he turns in a paper.