The new face of Coral Ridge 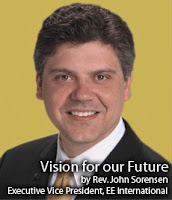 For now or for ever?

The Coral Ridge Hour often rebroadcasts old Kennedy sermons, sometimes repackaged with offers of new books or videos from the Coral Ridge media store. Given the decades of material in the Kennedy archives, his television program could undoubtedly continue to do this indefinitely. However, at some point the ministry might chafe at the lack of new material. Perhaps that point has nearly arrived. While previews of coming attractions still include plugs for forthcoming rebroadcasts of D. James Kennedy holding forth from the pulpit, the Coral Ridge board of trustees has anointed Sorensen as Kennedy's temporary substitute. Sorensen has thus nudged Brian Fisher aside as the new voice of Coral Ridge. While everyone continues to give at least lip service to the notion that Kennedy will eventually return to his duties, the designation of Sorensen as lead pastor pro tempore opens up at least the possibility that Kennedy's successor has now stepped forward.

Will Sorensen be able to wear Kennedy's mantle with the same assurance and effectiveness as his predecessor? Let us all pray that he will not.
Posted by Zeno at 10:30 AM

Why are you monitoring & reporting so intently on this program?

Have you nothing better to do?

Are you afraid of something?