An explanation of science 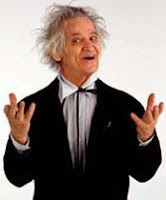 By someone who doesn't know any!

Since I am within reach of KSFO's Bay Area radio signal, I sometimes sample snippets of the programming at HotTalk 650. Most of it is rancid, of course, but it's good to keep an eye on what the wacko right is up to. For fringe rhetoric and incendiary hate speech, KSFO is hard to beat.

Thus it was on Friday morning, March 16, 2007, I was treated to a discourse by Lee Rodgers on the nature of science. He was heaping abuse on one of his favorite topics: Al Gore and global warming. His equally nasty co-host, Melanie Morgan, was instantly ready to chime in.

What follows is my own transcript of the on-air commentary. A few interjections and false starts were omitted to improve the readability, but all of the words were spoken by Rodgers or Morgan:

Rodgers: Got an e-mail from Nevada, Chuck in Fernley, and he raises a point that Al Gore and the poor gullible dupes who follow him can't seem to get through their thick stupid heads. He says the term “scientific consensus” is an oxymoron—regarding global warming or for that matter anything else. In science something is either so or it is not so. Taking a vote doesn't change the reality of it.

It's like saying that there is consensus among mathematicians that two plus two equals four. Those who believe otherwise are not outside the consensus, they are simply wrong.

Rodgers: How hard is this to figure out? This is the first thing I learned in, I don't know, seventh grade science or whatever it was.

Morgan: What scientists do is they try to take a premise and prove it to be false. I mean that's what their job is.

Morgan: Yes, so the fact that they would try to come to a consensus—that's not how the scientific community works.

Morgan: And Al Gore is an idiot. He's a big fat idiot, I believe would be the correct term.

Rodgers:Well, we don't want to get personal about this, do we?

Morgan: Yes, we do. We enjoy that.

Morgan gropes around for the germ of the idea of falsifiability, which is indeed one criterion for a scientific hypothesis: can you think of an experiment which would invalidate it? (That's why intelligent design is merely one more version of creationism and not, as noted in the Kitzmiller decision, any version of science.) She completely misunderstands, as does Rodgers, the role of consensus in establishing provisional scientific truth. All scientific truth is regarded as fundamentally provisional—as opposed to absolute—although different aspects of the scientific consensus vary dramatically in their likelihood of being overturned. (No one is talking about discarding the theory that the earth is roughly spherical.)

Consensus is one of the keystones of modern science and not the simple-minded true/false dichotomy espoused by dim thinkers like Rodgers and Morgan. They should mind their own business (right-wing radio ranting) and let the scientists take care of science.

And scientists, by the way, agree with Al Gore in a broad consensus about global warming and climate change. Sorry about that.

Update: Thanks to the kind assistance of Spocko, I was able to create a detailed transcript of last week's babbling by Rodgers and Morgan. This post was then revised to reflect a more complete version of what was said on the air. I'm pleased, however, that my original post turned out to be quite true to the sense of the comments I originally heard on my car radio (with a certain amount of disdainful gnashing of the teeth).
Posted by Zeno at 4:00 PM

Thank you Rodgers and Zeno!

I am a science teacher (both high school and community college) in the Central Valley of CA and nothing irks me more than improperly defined terms and incorrect usage. I continually tell my students that words "mean something" and that you have to use them correctly. While many of the students who I teach chemistry to learned another language besides English first, I get the lazy attitude about proper usage from my English-only students.

Many people seem to be clueless how science works. One of my students asked me the other day if I "believe in global warming and the greenhouse effect." I told her that it is not a religion and there is no belief involved. I explained how to properly phrase a scientific question and answer :(Yes, based on the evidence it does appear that the Earth is warming, however there is debate as to the cause).

We were having an informal conversation and the student was not offended by correction, however I still dont think she got what I was driving at. Words mean things! Science is not a religion!

I think statistics helps lend to this incorrect perception of how science works. People tend to want to be part of the larger majority, and if all these other people say it it must be right. No. Regardless of how many people agree with you, you can still be wrong for all eternity.

Grrr. Consensus. You are wrong or you are right. End of story.

On another note, I like your blog Zeno. It gave me the warm fuzzies that I wasnt the only "candle in the dark" (to quote Sagan), here in the middle to upper reaches of California.