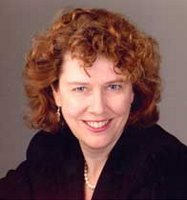 Take a gander at this

San Francisco Chronicle columnist Debra Saunders is one of the less loony members of the political right. I realize that's a very low bar, but Saunders has been known to depart on occasion from the list of official Republican talking points. Today, however, Saunders spins very reliably to the right as she welcomes the Democratic renaissance in Congress. As she identifies several rhetorical points raised in past political debates, it seems that only the left exhibited any mendacity or hypocrisy; right-wingers were reliably on the side of the angels:

Ring out the old bromides

There are certain arguments that partisans repeat as if they are holy and certain—until the arguments are no longer convenient. Here are some bromides and political arguments that were broadly used in the last few years, but now have outlived their usefulness, so you probably won't hear them much in 2007:

The Pottery Barn Rule: You broke it, you own it. There was a time you couldn't go a day without hearing an Iraq-war opponent invoke former Secretary of State Colin Powell's famous warning about sending U.S. troops into Iraq. Apparently these folks never really believed in the rule, because they now want America to disown an Iraq mired in chaos.

We liberals should have recognized that Secretary Powell was enunciating a cosmic truth when he used the apocryphal Pottery Barn Rule as a metaphor for the danger of an invasion of Iraq. As the scope of Bush's miscalculation became apparent, we chimed in with “We told you so, dammit!” and the war apologists snapped back with “Yeah, we screwed the pooch, but now we're all stuck with this sorry dog!” I guess staying the course is supposed to make things better. Does Saunders really believe that? Does she think any anti-war protester believes that? Or ever believed it?

Impeachment is an attempt to overturn a popular election. The left used that argument repeatedly when the GOP House impeached President Bill Clinton. Funny, you don't hear the left making that argument when Democrats call for the House to start impeachment proceedings against President Bush.

The left used that argument repeatedly because it was true. Republicans never tired of casting doubts on the legitimacy of the Clinton presidency, insisting that he won with less than an absolute majority of votes only because Perot's independent candidacy siphoned off votes that were rightfully theirs. Does Saunders want to point out how quickly this argument was dropped when George W. Bush squeaked into office with fewer votes than Al Gore?

There's another point to be made here, too. The Republicans had to try to box Clinton in by turning a consensual liaison into a supposedly impeachable offense by engaging in deliberate entrapment. It was a lot of sound and fury about extremely little. Those who want to impeach Bush have much meatier accusations.

Presidential wannabes should have military experience. Bush's National Guard duty as a pilot was not enough for Democrats, who cited Sen. John Kerry's combat medals as a reason to elect him president. Alas, combat experience didn't cinch the election for Kerry in 2004. Now, with Democratic Sens. Hillary Clinton and Barack Obama likely to run in 2008, and former Sen. John Edwards' hat already in the ring—not to mention the strong potential that a Vietnam war hero, Sen. John McCain, will head the 2008 GOP ticket—the military experience and hero status that was supposed to put Kerry in the Oval Office won't be so vital for presidential candidates any more.

We cited John Kerry's combat medals as a contrast to George W. Bush's curiously truncated career in the Texas Air National Guard. Saunders can disdain the chicken-hawk argument all she likes, but liberals have not made any kind of joint announcement that we all think military service is a prerequisite for national office. However, we do, I think, generally believe that ducking out via multiple deferments or preferential admission to a National Guard unit is a pretty solid disqualification for anyone aspiring to be a gung-ho saber-rattler.

The aforementioned Colin Powell has already informed us how he was spoonfed information that was known to others to be highly speculative. George W. Bush doesn't like advisors to tell him things that go contrary to his preconceived convictions, so it's not surprising in retrospect that he hardly ever heard anything he didn't want to hear. Bush fostered the misinformation machine of which he is now supposedly the victim. We're not so much arguing that Bush should have been more skeptical of CIA intelligence as we are saying that he should have been interested in more of it—not just the cherry-picked stuff.

Washington's deficit spending is unconscionable. This year, Republicans will want to maintain the Bush tax cuts and Democrats will be enjoying their return to power. In 2007, many 2006 deficit hawks from both parties will go wobbly.

Saunders gets one right here. But I'll offer a mild dissent to her pox-on-both-houses approach: The Democrats will prove to be a lot more responsible about spending than the Republicans. Of course, that's not going to be difficult, is it?

Yes, Al Gore has retooled his message. The response to global warming will require a transformation of many of the casual consumption routines of our society, but Gore and his allies have shifted their attention to more attractive aspects of the transformation: new jobs, new technologies, and new attentiveness to individual responsibility. How amusing that Saunders gives the Hummer-driving Schwarzenegger as an example of mere lip service to our environmental problems. Here she shows her independence, instead of echoing specious claims that Gore would stay home and hold his breath if he were sincere about the dangers of global warming—instead of jetting about the country addressing every group he can. How refreshing of her.

Bush hasn't asked Americans to sacrifice because of the war in Iraq. Most of the folks I see making this argument aren't sacrificing anything to further the war effort either—they're just using the war to bolster their support for higher taxes on the rich. And they want the need for sacrifice to turn Americans against the war. Now that polls show that Americans don't support the war, the pro-sacrifice crowd will ditch the phony sacrifice argument.

It's not a phony argument. We who opposed the war aren't too keen about paying for it, but at least we realize it has to be done. On the other side, though, we see an array of profiteers. Bush's war has been a hand-over-fist money maker for his friends among the Washington beltway establishment of military contractors. Furthermore, the sacrifice is definitely coming: Bush is handing the bill for his shoot-'em-up foreign policy to the nation's children and grandchildren. After all, pay-as-you-go is for sissies, not for cowboys!

Nice article. Hit your blog off a link from C&L. Keep up the good work. Nice writing style, good viewpoint, succinct and
accurate, by my reconing.

Well said. I'm awfully tired of the hypocritical right. The idea that a blow job is in the same league with the war crimes, raping the environment and cheating the american people out of billions are equal is lunacy.

about spending, does anyone know if the Dems will institute PAYGO again?

Of course a BJ is not in the same league -- it's far far worse. At least that's the conclusion we must draw from an examination of the news of the past 10 years.