God is in the details? 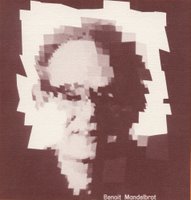 I thought it was the Devil

Creationists fancy themselves to be scientists, but very few of them actually are. One of the rare exceptions is Jason Lisle, who holds a Ph.D. in astrophysics. It's not easy to remain a young-earth creationist in the face of our vast universe, but Lisle's biblical blinkers are working very well so far. In addition to writing the creationist astronomy book Taking Back Astronomy, Lisle has penned an article for 2007's first quarterly issue of Ken Ham's new Answers magazine.

Lisle is on the lookout for evidence supporting his creationist point of view. He claims to have found some. In mathematics!

Numbers have existed from the beginning of creation, yet researchers have only recently discovered the hidden shapes that the Lord placed within them. Such beauty defies a secular explanation but confirms biblical creation.

Hmm. I hope there's more to it than that. Though so far it's typical. In the absence of credible evidence, “proof by assertion” is a popular rhetorical device in creation apologetics. But let's cut Dr. Lisle some slack. Surely he was exposed to the scientific method while earning his doctorate in astrophysics from the University of Colorado at Boulder. Let's see what else he has to say, this time about the specific fractal known as the Mandelbrot set: 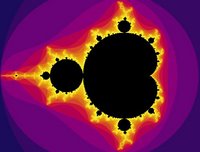 God alone can take credit for mathematical truths, such as fractals. Such transcendent truths are a reflection of God's thoughts.

Well, that was weak. Not that I'm particularly surprised. It's all part and parcel of the “I can't really understand it, so God must be behind it” argument favored by creationists (and, one might add, intelligent design advocates, too).

Lisle's not quite done. He needs to invoke another hoary creationist device.

Evolution cannot account for fractals. These shapes have existed since creation and cannot have evolved, since numbers cannot change—the number 7 will never be anything but 7. But fractals are perfectly consistent with biblical creation.

Shucks and darn! He's got me there! Evolution does not have an explanation for fractals. What a terrible flaw!

I feel an inspiration coming upon me. I'm sure that I can generalize Dr. Lisle's brilliant argument. For example, bricks cannot change, so they must be evidence of creation, too! On the other hand, bricks have been known to crumble, so perhaps that's evidence for evolution. I must try harder. Since numbers are an abstract notion, maybe I should seek something a little more conceptual.

Hey, how about love? That's really abstract. And love is eternal, right? What would evolution have to say about that, huh?

Well, I suspect evolutionists would say that love is an epiphenomenon related to the biological drive to reproduce, without which there would be no succeeding generations on which natural selection could operate. Yeah, those crafty evolutionists wouldn't be daunted by love. I probably went too abstract. Let's find an example that splits the difference.

I've got it! How about the length of a meter? We can apply it to physical measure, but the notion of a specific length is an abstraction. And the length of a meter cannot change. It's always 100 centimeters! Evolution has nothing to say about that, does it? Once again, evolution is defeated. Poor evolution! (I realize some may argue that length changes with respect to velocity, but that's based on Einstein's theory of relativity, which lots of creationists view askance. Don't go there!)

Now that Lisle has proved that there's evidence for creation in mathematics, what can we expect next? Some evidence from biology? (Probably not; that approach has not worked very well for creationists.) How about anthropology? (Nope: even worse.) Should we consider physical education? (Not a chance. That's very survival-of-the-fittest, isn't it?) Maybe accounting? (Actually, that may be one of Satan's infernal devices.) No, no. None of those.

I've got it! Political science.
Posted by Zeno at 3:00 PM

It occurred to me once that math was in a unique position in regard to other academic areas because it doesn't tread on any theological toes, that is until I read Edward Nelson's (math prof at Princeton) article "Mathematics and Faith."

(Nelson doesn't make the claim that math/fractals/flowers are beautiful therefore God exists, he actual unintentionally appeals to something more like "extreme" formalism.)

Anyhow, I am a fractal atheist. The photo in question looks like some sort of strange bacteria. It's not beauty, it's a rosarch test;-)

It is, however, God who is in the details, according to Mies van der Rohe (or at least that's the usual attribution). The bit about the Devil is a Reagan-era perversion; you recall, of course, that Reagan was not a micromanager but a guy who let the experts take care of details such as who was bribing which Middle Eastern country to launder his illegal assistance to which Latin American country.

At least that's my version. I challenge anyone to come up with an example of the Devil version from before 1981; in fact, the first use would be later than that, when Reagan's friends started betting caught at things.

Myrtle, thank you very much for that link. Reading that paper spurred me to think about a few notions (with Cantor, Leibniz, Plato and Godel as major figures) on which I haven't spent much time in some while.

There's a curious connection here for me. Way back in college I took Math 457 - Mathematical Logic, in my senior year. (I aint saying how "way" back it was!) The prof stormed through the material from Pythagoras (and Euclid too!) to Godel so fast that by the time we had "reconstructed" the incompleteness theorems, we still had two weeks left in the semester. He adswered one final question about Godel's diagonalization method, turned to the class (all four or five of us) and said "Well then - that's that. What do you want to do now?"

After the obligatory suggestions involving beer and such, I asked, "Just what the heck is a fractal, anyway?" I knew he was cuckoo for fractals. So we spent two weeks learning about Mandelbrot and Julia sets, Sierpinski gaskets, and so on.

Now, when I asked that question, he got all excited like and said, "well they're everywhere! I see a fractal right there!" as he pointed to a very large American Elm just outside the third floor window. "There's a fractal!" he gleeefully added while pointing up to the sky - presumably pointing to a cloud.

Not because I'm a formalist, though I am, but because I just couldn't resist, I looked at him with furrowed brows, exactly one which was slightly cocked. "Dick", I deadpanned, "that's a tree. And that's a cloud."

Well that got us into a nice little diverison wherein we discussed formalism versus platonism verus...

To wrap this up and supply some closure, it was ony after learning about fractals and self similarity that I saw their beauty. Like Myrtle, I wasn't terribly impressed by those "Rorschachian bugs." It aint the picture that's beautiful, it's the fractal.