So stop it, jerk face!

Tommy and Larry are relatives of mine whom I've known all their lives. On my mother's side of the family, they are first cousins to each other. A few decades ago, when they were quite young, Larry made the momentous discovery that “Tommy” was not his cousin's given name. It was “Thomas.” This revelation delighted Larry, who then inaugurated a long sequence of questions and comments addressed to his cousin, each one containing at least one painstakingly exaggerated pronunciation of Tommy's given name:
I'm sure you get the idea. After some half-hearted attempts to spin Larry's name in a similar way (and “Larry,” not “Lawrence,” was indeed his name), Tommy gave up and resorted to the silent treatment. Larry eventually tired of the game.

That's the kind of behavior you expect from children. When they indulge in such activities in the presence of adults, at some point the adults have their fill and order the kids to cut it out. Unfortunately, childish behavior of this kind is standard practice in our nation's political discourse, and there's no sign that the adults are about to say that enough is enough. 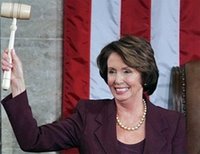 The opening of the 110th Congress was the occasion of some attempts at civility. Even Republicans who spent the campaign shrieking about Nancy Pelosi's “San Francisco values” managed to suppress most of their baser instincts as she became the first Californian and the first woman in history to attain the position of Speaker of the House. Her opposite number, minority leader John Boehner, nevertheless promptly pulled a boner in his otherwise gracious concession speech when he referred to his rival in the “Democrat Party.”:

Today, the Democrat Party assumes the challenge and opportunity of majority power in the people’s House. Republicans will hold the incoming majority accountable for its promises and its actions, but we also want to work with the incoming majority for the good of our Nation that we were all elected to serve.

Boehner is so steeped in the standard Republican practice of misstating the Democratic Party's name that he cannot avoid the childish mislocution even when he is trying to be nice. Even the president of the United States toes the line. It's sad.

Anyone who says “Democrat Party” is not your friend. This is an infallible dog-whistle test for Democrats.

I have never liked political name-calling. Although I am perfectly willing to heap invective on those with whom I disagree (for example, I can call the president a liar because he traffics in falsehoods), I quickly grow weary of vandalized vocabulary. Thus I refrain from such misbegotten misconstructions as “Rethuglican” (although I'll happily cite GOP members whom I regard as thugs: e.g., Tom Delay, Virgil Goode, and Tom Tancredo). Heck, I've come to think of the unadorned term “Republican” as an insult all by itself. As it should be, given their penchant for slurs like “Dhimmicrat.”

Just this week I heard radio propagandist Melanie Morgan stumble over Governor Schwarzenegger's name. “Oh, no,” she said, “we nearly said it right!” Indeed. Morgan and her talk-show partner Lee Rodgers have a policy of snidely referring to California's governor as “Schwarzen-Kennedy” See how funny that is? He's married to Maria Shriver, after all, and he's a RINO (Republican In Name Only) because of his centrist politics, so Rodgers and Morgan call him a Kennedy. This is priceless political wit at the exact intellectual level you would expect from KSFO.

No wonder I don't want to do it myself. I would be lowering myself to the level of Malady Morgan.
Posted by Zeno at 3:00 PM

Funny, I thought that the use of "Democrat Party" instead of "Democratic Party" indicated sloth only. I'm a bit relieved to find that the use is more deliberate and untoward. It confirms my opinion of several members of the Republican party.

I'm with you on the general dislike of content-free name calling ("defeatocrats," "rethuglicans," etc.), but John A. Davison's repeated use of the word "darwimps" just tickles me to no end. (Recent examples at Good Math, Bad Math in the tread about Sal.)