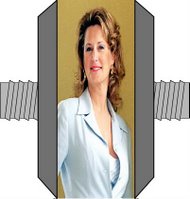 Right-wing propagandist Melanie Morgan is feeling the pressure. The toxic talkers of KSFO radio in San Francisco have been losing advertisers ever since those advertisers started hearing what Morgan and her cohorts actually say on their programs. Once Spocko began drawing attention to the high-spirited racism and sadism of KSFO's talk show hosts, Visa and other major corporations decided that they would rather not be associated with such vileness. It's a free market, folks, and no one has to advertise in a cesspool!

Today Morgan fired off a message to her minions. Halfway There has a copy of this e-mailed call to arms, by means of which Morgan hopes to inspire an outpouring of love and support for her and KSFO's hate talk. (Love and support from people who have prune-sized hearts like that of Montgomery Burns? Excellent!)

It began when one liberal blogger tried to get us fired. When that didn’t work he began an anonymous campaign to intimidate advertisers to not support “hate speech.”

Now liberal bloggers are calling for our firing. They are also pushing for implication [sic: she means “implementation”] of the Fairness Doctrine to force liberal radio programming down the public’s throat. (They tried to compete in the free market with “Air America” and that failed miserably, so now they are using these tactics to silence conservative radio voices). [sic: the period belongs inside the parentheses]

*ACTION ITEM: To respond to growing pressure from these ruthless liberal bloggers and political activists to silence us, we are going to do something unprecedented. We are opening up our airwaves, cancelling our normal programming and having an open forum where the public, news media, bloggers, critics and friends alike can call in and address any issues surrounding this matter.

I am asking you to call in and voice your support!

The media will be covering this event live, and I want to make sure you are invited to weigh in on this matter. We will give out the phone number to call in during the special program.

You can also send email to our station here:
http://www.ksfo.com/contactus.asp

I want you to know the lengths these people are going to smear us and to try to silence us. They’ve gotten reporters to say that I’ve called for targeting Nancy Pelosi for assassination because of the following comment.

1. I want you to go here and play this clip (on the liberal Media Matters website of all places) and see for yourself how these people are engaging in a shameless effort to misrepresent our comments:
http://mediamatters.org/items/200611210011

2. There have been times when I have regretted making a comment or felt I was insensitive in characterizing a situation. When such incidents have occurred, I have been forthright in offering a retraction and apology. Here’s one incident from December 2006.
http://www.melaniemorgan.com/frommelanie.html

And related to a similar incident here was the comments made by my co-host Brian Sussman:
http://melaniemorgan.com/1_short_sussman_apology.mp3

I am sharing these clips with you so you can know that I take my efforts to fight for conservative causes very seriously. I would never sink to levels of advocating violence or other such inappropriate comments.

I hope I can continue to count on your support.

Melanie and her radio buddies have started making apologies, have they? How it must gall them! And now they have to resort to ginning up support like a PBS station during a pledge drive. Maybe she can call up some friends at KQED to help her out manning the phone lines—if only she had any friends at KQED.

One more item: Melanie forgot to tell us when the KSFO love-in broadcast will be held. It's Friday, January 12. If you're free tomorrow afternoon, try to record the show. I'm sure there'll be plenty of examples of sweetness and light! (But keep a barf bag handy, just in case.)
Posted by Zeno at 5:00 PM

A whiny letter asking for support? This is a media professional? I'm gonna fuckin' puke... She doesn't deserve to be on any radio, anywhere.

this is huge. gonna blow this up right after midnight. they are astroturfing their own show! HAHAHAHAHA! And we busted them!! Thanks so much!

Glad to be sent here by Mike Stark, Zeno. I gotta say, the call that someone is trying "to deprive [her] of a livelihood" falls a little less than flat considering the 3008 that have lost their lives in the war and violence that she's been cheerleading. Not to mention tht she'll probably get a book deal with Random House.

great work, keep it up.

Thanks for the info!

Thanks for the "heads up."

Have fun and remember... be civil with the stupid people. You don't have to be polite or kind, just civil.

Yeah, Mike sent me too - linked to you and credited you with the astroturfing scoop.

Thanks for including the Right Wing Bitch's email address. That should come in handy!

We have the bubble-headed bleach blonde who thinks it's interesting when people die! Sounds like there's a hit song in there somewhere....

Thanks for staying with the Spocko saga -- and bringing an important scoop. Mike sent me here, too, and I'm glad he did. As an engineer, I am always glad to find a good STEM-oriented site, and I really like yours. Consider yourself bookmarked.

BTW, may I suggest an addition to your gallery of targeted Republican congresscritters? It is AR-03 John Boozman, a syncopant who votes 100% BushCo.

well, to be fair, if enough advertizers decided to drop their ads from the station, the management would have little choice but to fire the offending 'hosts.'

i for one would be delighted if it happened that the lying cunt and her fascist buddies were out of work...permanently...

also, thanks for including the feculent bint's email address...i plan to hurl some invective her way, asap...
/.

so fighting for conservative values means personally attacking someones appearance? i guess she reads a bible that has many references to jesus attacking his critics the same manner. you know if asked she would proudly proclaim she attends church regularly. shameful!!

That bitter harpy's misuse of words and punctuation is especially hilarious given the fact that she and her windbag cohost love to portray themselves as self-righteous defenders of the English language. (You may know them better as grammar nazis.)

Please note: My comma is inside the parentheses. :-)

Oh Come On! She and her cohorts spout out mean, nasty and sadistic stuff constantly and that is "conservative" values? No... it is pandering and opportunistic catering to their base audience.

She is trying to characterize this as a friggin' first amendment issue... dearie, the Constitution protects people from governmental interference of their speech... not consumers telling advertisers that the show they are sponsoring is sick.

Like all conservative talk show people... it is just a game! Oh please, I will denigrate and attack on a personal level... but please, oh please don't attack me... because it is all just "entertainment".

A typical "conservative" whinning... those mean bad liberals are out to get them. Hehehehe.