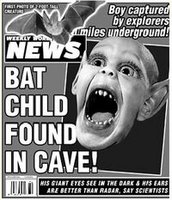 So much for mainstream media

Folks seeking alternative news sources enjoy many choices from outside the mainstream. It's difficult to beat Town Hall, National Review Online, NewsMax.com, or WorldNetDaily for reporters who have exempted themselves from all of the restrictive canons of journalism. We know that fact-checking can kill a good story, and what could be more important than a good story? Right? (Extreme right.)

Nevertheless, even the far-out news media can on occasion miss a huge story, the kind of scoop that any one of them would have died to get first. This week the alternative media were outmaneuvered by the fearless Weekly World News, a tabloid that is alternative even to the alternatives.

The news is that Sen. Clinton is prepared to reveal her choice of running mate as a dramatic coup de théâtre that will shake up the 2008 presidential sweepstakes. Hillary is looking to link up with Bigfoot in a powerhouse ticket that will crush Republican hopes to retain the White House. As the Weekly World News blurb says, “Republicans scramble for candidates when news of the former first lady and her hard-hitting running mate's bid for the Oval office is announced!” Indeed.

HOMER, N.H.—A member of Hillary Clinton's campaign team couldn't suppress his excitement when he recently confided to Weekly World News that the New York Senator is not only running for president, but has selected a running mate in the 2008 race.

“Leading Republicans have threatened a ‘wild and woolly battle’ in the upcoming election and we've got just the guy to help meet that challenge,” said Clinton advisor Don Key.

The ‘guy’ is none other than a towering wild man well known to readers of Weekly World News. We don't mean Bill Clinton: we mean Bigfoot. “Bigfoot doesn't intend to bully people,” Key went on. “His style will be a no-nonsense, get-it-done approach similar to Teddy Roosevelt—with a slightly altered motto of ‘Grunt softly and carry a big club.’” 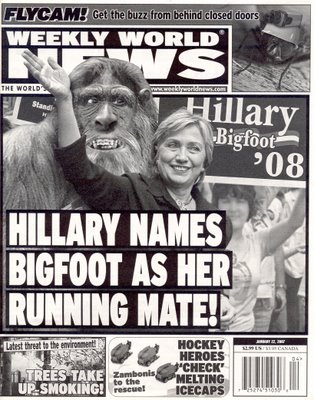 When told of the still-secret news, G.O.P. spokeswoman Ellie Funt ridiculed the idea.

“Good grief, how can someone run for Vice President when he doesn't even exist! No one ever sees him except hunting prey in the wild or battling equally imaginary foes!” 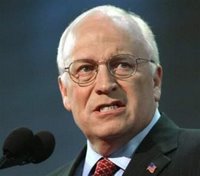 Reminded that this is how most people saw Dick Cheney, Funt stayed on message.

“Running Sasquatch is just another stupid stunt by desperate Democrats,” she continued. “Besides, the public won't vote for someone who stinks like a billygoat. Who'd come to those rallies?”

While shocking to many, the choice is not entirely a surprise. Political observers first became suspicious when they read about Bigfoot getting into shape. (“The Bigfoot Diet,” Weekly World News, Jan. 1, 2007). It was obvious that his workouts and dieting were a preparation for some type of public appearance.

Watchers of the political scene always recognize dieting as a reliable indicator that a politician is preparing to run for office. Whenever Ted Kennedy slims down, it's inevitably the case that an election is in his immediate future. By a curious coincidence, the Weekly World News was fortunate enough for its diligent reporters to have published details on Bigfoot's diet program a mere three weeks before breaking the news of his likely candidacy for the vice presidency. This is a tabloid with a track record.

“I'd be proud to vote for the ol’ boy,” he said. “We got a lot in common. We live in the same area, we both hunt deer, and neither of us are much for goin’ to barbers. I even forgive him for stealin’ my wife back in ’65. After all, that was a hard winter and it can get lonely up in the mountains.” Fuhrman laughed. “I guess that would make him a natural politician, right?”

Still, the Clinton camp knows there is much work to be done.

“Bigfoot will have to stop shunning crowds, kicking dogs who come sniffing his leg and learn to be accepted into polite society,” admitted Key. “When he nearly crushed my knuckles, I knew we had to begin by teaching him a proper handshake. And we may have to rule out kissing babies—not because he scares them but because he attracts them like a big, live teddy bear. The last thing we want is video of a bunch of tots clinging to his fur while their moms scream in terror.

“Fortunately; once she's had a hot shower and a leg wax, his companion, the former Mrs. Beatrice Fuhrman, will make a charming co-campaigner to her common-law mate.”

Objective political scientists disagree about whether Bigfoot will help the Democrats' chances in the election.

“The public is tired of the same old sound bites and party lines,” said Dr. Will Farestait of the Green Mint Think Tank. “They want an outsider to represent them. Since we've seen how a lumbering, semi-human creature with few verbal skills can attain elected office these days, Bigfoot should be a shoo-in.”

“Bigfoot has no credentials. No track record, unless you count muddy footprints in a marsh. He doesn't have a snowman's chance.” Benjamin added, “There's also a problem with his legislative agenda. I've heard he thinks that litterbugs should be torn limb from limb. I'm reasonably sure that language will not be accepted by certain liberal legislators—though, ironically, the conservatives may warm to it.”

It cannot be denied that Bigfoot would be a formidable campaigner. His animal vitality would enable him to log many hours on the hustings without tiring. And just imagine his ability to intimidate his rivals during debates. While Lloyd Bentsen contented himself with merely humiliating Dan Quayle with rhetorical barbs, Bigfoot would certainly favor actions over words.

Of course, the big unanswered question remains: Why would this normally shy creature agree to step into the spotlight?

“We first approached him with a banana and a platform that is heavily environmental,” stated Key. “Turns out he's very concerned about our vanishing wilderness, forests sickened by acid rain and polluted waters. He's saddened that his once-pristine home environment is degrading rapidly.

“I truly believe he'll rule the Senate in a positive way for eight years in a Clinton administration—then go on to serve as our president for two terms,” predicted Key. “Can you imagine him negotiating nuclear weapons control with North Korea?

Bat Boy was approached for a statement, but his people said he was deeply disappointed by Sen. Clinton's decision and would release a formal statement at a later date.
Posted by Zeno at 2:30 PM

how on earth did I miss this???