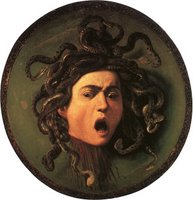 KSFO's Melanie Morgan has clambered from the fetid swamp that is her morning talk show and taken her anti-Pelosi campaign to the big time—Hannity & Colmes. I'm sure she felt right at home. Last week she ranted on the air about the “dirt” that would keep Pelosi from ever becoming Speaker of the House. (You can see my original post on Morgan's threat immediately below; I wasn't too far off in predicting what Morgan would do.) The loonies at Free Republic are trying to push the story into the mainstream media:

NOTE: if anyone saw the show, please report

I don't know if it is on the FOXNEWS site yet, but something potentially very important occured on Hannity and Colmes tonight.

KSFO's Melanie Morgan was a guest and exposed Nancy Pelosi, speaker in waiting, as employing illegal aliens to work on her wine vineyard in the Napa Valley.

If the charges are proven, how can the House possibly allow Pelosi to become speaker? Draining the swamp, will mean draining her.

As you might recall, Linda Chavez had to withdraw her nomination as Labor Secretary after it was revealed that she had hired an illegal alien in the 1990s.


Oh, dear! Am I helping the Free Republic wackos and Melanie Morgan distribute a smear about Speaker-presumptive Pelosi? Yeah, right. Like a posting here constitutes major publicity. No, I'm merely pointing out how lame their efforts are. So very sad.

(The following was originally posted on November 10.) 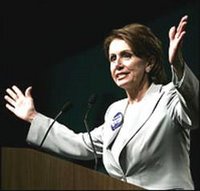 I agree that it is unseemly for the victors in a hard-fought contest to gloat over the fate of their defeated opponents. Therefore I was pleased that Nancy Pelosi and Harry Reid were gracious in their acknowledgments of the Democrats' success in taking over both houses of the U.S. Congress. I, on the other hand, can gloat all I want.

The day after the election, I radio-surfed among the various talk-radio stations (AM dial, of course) in northern California. Depending on location and time of day, I can usually pick up the Air America affiliate in Sacramento (KCTC, AM 1320) and the regional outlet for the Stephanie Miller Show and other Jones Radio progressive programs (KSAC, AM 1240). That's right—California's state capital has two liberal talk-radio stations. Bouncing back and forth between the two stations on November 8 gave me a heady dose of unreserved celebration and gloating. Yay! Take that, right-wing suckers!

Speaking of right-wing suckers, I can also pick up the highest profile regional source for reactionary rant radio, KSFO AM 560. Stuck in the belly of the beast in the Bay Area, struggling desperately to remain afloat in a region awash with dreaded “San Francisco values,” the conservative talkers on KSFO are led by local luminaries Lee Rodgers and Melanie Morgan. Since a gloat-fest can only benefit from a dash of Schadenfreude (not that I was feeling much Schade about my unrestrained Freude), I included KSFO in my post-election radio surfing.

Rodgers and Morgan were already trying out the now-official right-wing excuse for the Democratic romp (“The Democrats didn't really win—the Republicans lost; conservatives actually won a moral victory while the GOP took a tumble”). Morgan, however, was also her usual combative and aggressive self. Instead of lying back and acquiescing in the rout of her political allies, Morgan was already planning a counterattack:

She thinks Pelosi can be denied the House speakership.

“I have a lot of dirt on her,” said Morgan, “and I'm not afraid to use it. Nancy Pelosi will never be speaker.” (I'm quoting from memory since KSFO does not archive its broadcasts, but this is an accurate reconstruction of the content of her on-air remarks.)

I grinned at yet another example of Morgan's hubris. The week before she and her political group, Move America Forward, had taken their own shot at creating a “November surprise.” By all indications, Morgan really thought it would have an impact on the election. Now she was sharing another delusion of grandeur.

Using my own gigantic brain, I can speculate on Morgan's brilliant plans to head off a Pelosi speakership. Some aspects of this pipe dream have already been passed around in the redder portions of the blogosphere, although the size of the Democratic victory has muted their voices. The theory has been that several members of the Democratic caucus (particularly those newly elected in recently Republican districts) might be uncomfortable—or even balk—at voting for a dreaded San Francisco liberal as their leader. Here's an apposite quote from Free Republic:


Wouldn't it be sweet if those “Conservative” dems wake up tomorrow and see the light and defect over to the Republicans???

First of all, Pelosi is a very smart woman who understands the two roles that she plays. She is the liberal representative of a liberal congressional district. That's an important role that she fills very well, giving her constituents a voice and a vote in the U.S. House of Representatives. She is also the leader of the Democratic caucus in the House. As the leader of the Democrats, Pelosi's role is to keep the caucus together and to see that it prospers (as indeed it has under her leadership). She therefore works pragmatically with people who do not fully mirror her district or her political philosophy. Even the Democrats from the reddest districts know how much Pelosi contributed to their victories by keeping the troops focused on the key issues. They will unhesitatingly vote to make her Speaker.

Morgan and others will try to resurrect the failed “San Francisco values” attack on Pelosi, no doubt with the addition of the old whispering campaign against the Speaker-presumptive. For example, did you know she's wealthy? That's supposed to expose her as a hypocrite because wealth is obviously a Republican family value. And did you know that the Pelosi family owns a vineyard whose workers aren't unionized? This supposedly makes her a union-buster, contrary to her avowed support of the labor movement. Since no evidence of anti-union activities has ever been offered (and you can be sure the Republicans would serve it up if it existed), the absence of a union at the vineyard probably means the workers are well compensated and have never seen the need to organize. That's a far cry from being a union-busting hypocrite.

That's the sort of “dirt” the right-wing thinks it has on Nancy Pelosi.

We can expect to hear more big talk from Morgan before the Democratic caucus makes it official and confirms Pelosi as their leader and future Speaker of the House. And whatever Morgan says, I'm sure she'll be shooting blanks.

Just one little thing - you don't feel Schade over your Freude - you feel unrestrained Freude over the Schade of others ... Me, too. Yay!

And, oh yeah - like nobody's ever noticed the illegals working for Pelosi? And how come Melanie has been sitting on this info? How come she did put it out in time to influence the election?

Why didn't she put it out earlier to influence the election? Do you honestly think it would have hurt Pelosi's chances for reelection? If anything, in her district, such information might have gained her more votes. I can imagine circumstances in which it might effect the results of the vote for speaker though (although I doubt that it'll matter in reality).

Spotted your comment over at Orcinus'place. Do you have any contacts at the California Teachers Association? They are advertising on KSFO on MORGANs and it just galls me that they are doing that. *I* have been keeping track of their anti-Union anti-teacher comments for some time (if you remember a day that they said something especially bad drop me a line I have an education archive of their show)

If you would like to let the advertisers know that it is not okay to talk about "painting a bulls eye on Pelosi" drop me a line at spockosemail atsign gmail. com