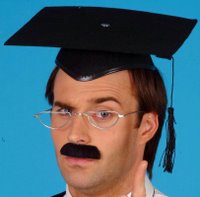 Stalling on a steep grade

My polite student sent me another note. This one was written on a math quiz:

I know this, I just don't remember the formula and I know how to do them. Just can't think this early in the morning.

As I noted in the earlier post, this is the guy who told me he wasn't into homework, liked to stay up late, and expected to sleep through our early morning class occasionally. He also said, “I am thinking about getting a pretty good grade in this class.”

Well, he can think about it all he likes. I wish he'd do his homework instead. He's survived this long for two reasons: (a) it's a review course (precalculus) and he remembers a lot of his previous work (but clearly not all of it) and (b) he crams for exams and gets decent exam scores (so far, anyway). Unfortunately, his indolence is catching up to him. He's blowing off quizzes and homework assignments that are 15% of his grade. How do you get a “pretty good” grade in a class where you've kissed off fifteen percentage points?

Ah, to be young and foolish!

There's better news, fortunately, for one of my other students. My “stay the course” student achieved a personal best. After racking up a stellar 7% on the first exam and 0% on the second, she soared to 12% on the third. The next lowest grade was a high D (in the sixties) and everyone else in the class passed outright. The modal grade was an A, so I guess the exam wasn't too difficult.

The student with the F-minus-minus-minus sat serenely during class while we went over the exam. Her attendance is good, but her attention is nonexistent. I figure she's running some kind of scam (technically enrolled for n units to qualify for financial aid?), but I'm not sure what it is. As long as she keeps coming to class, I don't have the authority to drop her from the roster. That's a remedy available to me to deal with students who miss too much class. Her smiling face, however, is there every time.

I was talking this morning with one of my younger colleagues, a new kid whom we hired fresh out of grad school. He's still learning the ropes and he just had a hassle with a difficult student who wanted all kinds of special treatment to compensate for her lack of performance. I told him about my own outstanding (in a certain sense) students and told him we should learn an important lesson from the legal profession.

Lawyers have a special privilege that we teachers would do well to secure for ourselves. Whenever a jury is being empanelled, attorneys may exercise a “peremptory challenge,” whereupon the designated potential juror is promptly excused with the court's thanks. No reason need be given. That's why it's called “peremptory.” (Otherwise it would be a dismissal “for cause,” which I believe was the case when a judge informed me I would be excused because the defense attorney was one of my former calculus students.)

I'd be delighted if each semester I had a pair of peremptory challenges. At the beginning of a term, after things settle down just a bit, I could size up a likely problem student or two and say, “You're out of here!” Naturally, it would be important to handle it more politely and discreetly than that (perhaps in a quiet, private e-mail from the instruction office), but it would be done at a stroke. Student gone. All over. I'd be happier and the rest of my students would be better served.

My young colleague did not immediately embrace my wild-eyed scheme. He thought about it for a moment.

“Okay,” he said. ““Could I have two challenges per class?”

Here's what I think would happen. After the first day, Prof A would dump students Q and R and Prof B would dump Y and Z, etc. On the second day Prof. A would have two new students, Y and Z, and Prof. B. would have the pleasure of Q and R.

Each would dump two bad students only to gain two.

I used to use a shotgun approach to the peremptory challenge: the first week's homework was longer and harder than it would be for the rest of the semester. But the students on the cusp frequently didn't even look at it until the last day before it was due, and so ended up with very low grades. Then I had angry students with lousy study habits. Not what I was aiming at.

Or you could devise some sort of complicated game of life and death, and if they did not figure out the puzzle, then you do not have to worry about them anymore.