O. J. Simpson and the path not taken 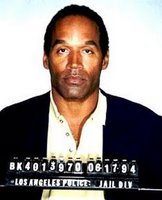 Running back as running mate?

Words fail. In a total triumph of tastelessness, O. J. Simpson is pretending to pretend that he killed his ex-wife. He's hawking a book titled If I Did It and giving an interview to the Fox Broadcasting Company. I guess he needs the money in order to continue his pursuit of “the real killers.”

At least Fox is the right venue for this pseudo-mock confession, continuing the wonderful tradition of such offerings as Alien Autopsy: Fact or Fiction? and Conspiracy Theory: Did We Land on the Moon? I look forward to the future broadcast of Misunderstood Genius: The Presidency of George W. Bush.

Most of us don't bother to think about Simpson much these days. Of course, if we see him in a rerun of one of the Naked Gun movies, there is an extra appreciation of the woes that befall him in the role of the hapless Officer Nordberg, punishments that now seem curiously apt rather than comically cruel. In the early days of his fame, as a college football star at USC, Simpson's name came up in a political context. It's a little known story, recounted by reporter Lou Cannon in Ronnie & Jesse, a dual biography of Ronald Reagan, then governor of California, and his rival Jesse Unruh, speaker of the California assembly. As Cannon tells the tale, it was 1969 and Reagan was puzzling over the best way to fill a political vacancy:

When Bob Finch joined the Nixon cabinet and left the lieutenant governorship vacant, Reagan was besieged by various factions in the Republican Party, by Nancy and the Millionaire Backers to name this or that politician to the vacancy. Reagan kept his own counsel and arrived home from the capitol one day to be confronted by Skipper [Ron Reagan], his usually quiet ten-year-old. “You ought to choose O. J. Simpson,” the boy suggested. “He would definitely make the best lieutenant governor.” Ronald Reagan's face, according to a friend, “lit up with sheer pleasure and sincere delight” and he agreed with his son that the then-USC football star would make an excellent lieutenant governor.

As charmed as he was by his son's suggestion, we all know that Reagan did not take the boy's advice.