The GOP as suicide bombers 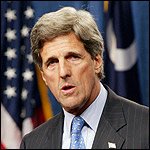 Few things have heartened me more than the right's reaction to Senator Kerry's slip of the tongue in Pasadena. Although the senator's faux pas was microscopic in magnitude, the full weight of the Republican war machine was thrown into a frenzied counterattack bent on righting an imaginary wrong.

Ordinarily, one might be daunted by this demonstration of political firepower. How good could it be that the GOP noise machine can still be revved up instantaneously into full battle mode? Weren't we supposed to have these scoundrels on the ropes?

We do have these scoundrels on the ropes. The flap over Kerry's remarks is definite evidence of that. The Republicans have pulled out all the stops in order to capitalize on a minor stumble by a Democratic leader. And all they had to do to exploit it was bombard the nation's airwaves with constant reminders of ... Iraq.

See how desperate they are? The best they can do is raise the profile of Iraq in the final days of the campaign. We have been treated to loud cries from the Republicans and their minions to think about our military forces in the Iraq war, the Bush administration's greatest failure. At every turn, someone in the White House, the Republican National Committee, or right-wing talk radio screams about Kerry and his supposed slur on our troops overseas. Here's a quote from an e-mail I received from Ken Mehlman, chair of the RNC:

John Kerry is dead wrong. Our troops who put their lives on the line represent the very best of America. They strongly believe in the cause they're fighting for.

Oh, do they? Most Americans don't believe in it and I know that not all of the soldiers do either. Many of the Iraq war veterans are running for Congress as Democrats. One of my good friends is an officer with our troops in Iraq, and he tells me the mission is a farce. (He and his troops ended up babysitting high-priced contractors who take top dollar for doing the jobs my friend's soldiers were trained to do.)

Mock outrage is an old Republican tactic, used to particularly good effect in the 2004 general election when Dick Cheney and other Republicans were shocked (shocked, I say) that Senator Kerry would expose the vice president's daughter as a lesbian. You might have thought it was difficult to out someone who openly took her same-sex partner to White House functions and political activities. Nevertheless, the Republicans managed to roll on the ground and froth at the lips over Kerry's callous “attack” on Mary Cheney.

Now mock outrage is back, with lying right-wingers pretending to believe that Kerry was attacking our men and women in uniform. This time, however, they have overplayed their hand:
Keep reminding everyone about the botched war, guys. You do good work. 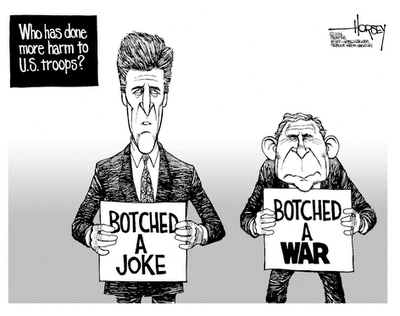 Independently of Kerry's intention when he made his comment, isn't what he is being accused of saying true?

If you get a good education, then you have options.

If you do not get a good education (and you are not rich), then the military is among the few options for a "secured" job.

Which, incidentally, does not mean that all the soldiers are uneducated. A implies B is not the same as B implies A. But I guess explaining that to Bush is a lost cause.

Oxeador, your logic is inescapable.
Since all trees are alive and Socrates is alive, then Socrates is a tree = Republican thinking.
Reminds me of a story from the campaign of Adlai Stevenson. After delivering a particularly firey speech Stevenson was approached by a man in the audience. "That was great!", the man enthused. "No thinking American could fail to vote for you after hearing that."
"That's too bad", was the reply. "I really need more than that to win."