It's not your father's dairy

The following essay was originally written a few years ago when I was in an ethnography class in graduate school. 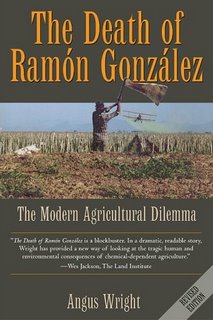 Last week’s presentation on Angus Wright’s The Death of Ramón González prompts me to share some observations with my classmates and teachers. Although I am not a scholar of the “corporatization” of agriculture in California’s San Joaquin Valley, I am an eyewitness. Many key events occurred while I was growing up in the Central Valley during the 1950s and 1960s, although I had no idea at the time of their significance. My comments are based on memory rather than research and my recall is not perfect. Even so, I have limited myself to those impressions that are clearest in my mind and ring true within the patterns of my experiences.

My recollections were initially prompted by the striking photograph reproduced on the cover of Wright’s book: the flag man serving as a marker for the crop-dusting airplane. I was probably about 10 years old (which would mean it was the early 1960s) when some cousins and I wandered from the family dairy to watch the spectacle of the crop-dusting biplane that had been hired to spray the adjacent cotton field. No one was worried too much about being exposed to the dust (or mist; I don’t recall which) that the pilot was laying down over the field, but we definitely kept out of the plane’s way. One boy who didn’t have a choice in the matter was the pilot’s son, who was pulling flag duty at the far end of the field. He was perhaps barely into his teens. Every time his father flew over him and doubled back for the return pass, the boy would pace off a prescribed distance to mark the point toward which his father should fly next time around. It may be difficult for people today to imagine this, but none of us thought of the boy’s job as anything other but exciting; we certainly did not think it was a blatant example of child abuse or endangerment. After all, the spray was an herbicide (for weeds) or pesticide (for bugs). It wasn’t of that much concern for people, right?

This casual approach extended to the seed corn that my cousins and I all saw loaded into the planting machines. While the corn itself was the expected yellow, the kernels were all dusted with a dark red powder, a pesticide. When the bags of corn were poured out, the dust formed pink clouds in the air. It stayed on your fingers if you ran your hands through the corn. It was a commonplace of farming and no one thought much of it. Our fathers would tell us to stay away from the corn mostly because we would get in the way or spill it on the ground through our carelessness. It wasn’t because we were worried about poisons that much. Don’t chew on the corn, okay? That was caution enough.

In those days, my grandfather and his two sons could be successful with 200 milk cattle and a couple of hundred acres of crop land that produced either fodder (hay or corn) or cash crops (cotton). The dairy farm supported my grandparents, my father, my uncle, their spouses, and half a dozen offspring. Today, the family dairy farm is being operated by my younger brother. He needs more than 600 cattle and several hundred acres (both owned and rented) to support his wife and daughters. Even with this dramatic expansion of the operation, he relies on cooperative associations like the Western United Dairymen. Without the clout of such formal alliances, my brother would be swallowed up by a corporate farm organization.

Corporate farming began to be visible to me in the early 1960s. The first clues were nice looking white signs with crisp black lettering. The signs each bore the name of a local farmer, but the sign also carried the name “Roberts Farms, Inc.” The farmer no longer owned his own farm (if indeed he ever had; some of the names were of people brought in to operate the purchased farm). It was initially a low-impact invasion. The farms looked pretty much as they had always looked, but a corporation owned them now. In retrospect, I don’t recall feeling any concern about the fact that an increasing number of such signs were visible during the four years that I rode a school bus into town to attend high school (late 1960s). I suspect that my father and uncle were somewhat more concerned about being encircled.

A very peculiar aspect of the corporate incursion into San Joaquin agriculture is the degree to which its victim, the family farmer, rolled over and played dead—or actively cooperated in his destruction. The Central Valley requires irrigation water to grow its crops. Federal rules created a special water subsidy for family farms no larger than 160 acres. (One square mile is 640 acres.) The limit was routinely circumvented by farm corporations, which would artificially break up their huge holdings into 160-acre parcels and thus qualify each portion separately for subsidized water from the Central Valley Project. Were the real family farmers outraged by this? Maybe some were, but I clearly recall how my father responded every time an attempt was made to enforce the limit. The corporations would send out direct mail and pay for newspaper ads that would warn that the Feds were trying to interfere with farmers. For many small farmers, the corporations had the clout they lacked when it came to fighting with the Feds. Since 160 acres was an impractically low limit even in the 1960s and 1970s, family farmers made an unholy alliance to undercut enforcement of the limitation. That enabled the corporations to save millions upon millions of dollars that they then used to buy out more independent farmers. (In 1982, the irrigation limit was finally lifted to 960 acres.)

Today the transformation is nearly complete. The surviving independent farmers are in strategic alliances and have adopted corporate aspects as protective coloration. My brother, for example, is no longer simply a family farmer. He is a corporation, using a business name to comprise all of his operations— farming, milking, harvesting, hauling, etc. In reality, though, the corporation is simply my brother, my sister-in-law, and my nieces. In order to fend off the corporations, my brother had to become one. He declined to be assimilated.

A cultural side note

My ancestors were subsistence farmers when they lived in the Azores, certainly not the dairymen their descendants became. The biggest industry in these Atlantic islands is fishing, together with many small family farms, some of which have a cow or two. However, like many other Portuguese immigrants, my grandfather’s first job in California was on a dairy farm owned by a relative. By whatever fluke, early Portuguese immigrants started out on dairy farms and they brought over additional family members to work with them. A tradition was established. A few years ago my brother invited me to attend a Western United Dairymen’s banquet in Sacramento, where the organization was holding a conference. While all the speeches were in English, the language I heard at most of the tables in the dining room was Portuguese. Perhaps one of the unifying threads that tie many of the independent dairymen together is a common heritage. I suspect this cultural component, shared by probably a majority of California’s dairy farmers, has given them the cohesion and resilience to survive all these decades in the face of the nearly universal triumph of corporate agriculture.
Posted by Zeno at 9:30 AM