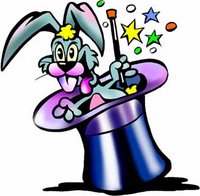 Waiting for the magic trick

We Democrats are a jaded lot, having witnessed the outright theft of the presidency in 2000 and the subsequent biennial disappointments, all laced with a generous helping of vote suppression and manipulation. To top it all off, the Republicans have been winning contests that were the Democrats' for the asking, but we just haven't had our act together. This, finally, may be the year of Democratic convergence.

However, even as we drive toward the finish line and keep our eyes on the prize, the big question hovers over us: What stunt will the Republicans pull this time? Where is the flag-draped, über-patriotic gimmick designed to swing the election at the last second? I've already offered a fantasy scenario where Osama surrenders to preserve in power his best Al Qaeda recruiters—George Bush and the GOP clown caucus in congress—but I don't really think that's likely. (Although it makes more sense than makes one comfortable.)

This weekend the San Francisco Chronicle got into the act with its Two Cents column, an on-line version of the old “man in the street” featurette. Here's an excerpt with my two favorite responses:

Are you expecting an October surprise?

The Foley thing was something. I hope the Republicans can find something on Hillary Clinton; I'm sure there is more than enough to get around. But, as was the case with Kennedy and Chappaquiddick, even if something is found, a left-based media will bury it on Page 7 of the want ads.

That's really something, isn't it? I mean, it's just disgraceful how the Democrats didn't clean up that scandal in the House page program. If the Democrats knew all along that the Republicans were hushing it up, why didn't they blow the whistle right away?

Of course, this particular talking point runs afoul of the fact that the Republicans have already admitted keeping information from the only Democrat on the page program oversight committee.

Late last year, [House Page Board chairman John] Shimkus met with Foley about the e-mails. But Shimkus never told Capito or the board’s other member, Rep. Dale Kildee, D-Mich., about them until Friday, according to all three.

But what about CREW, Citizens for Responsibility and Ethics in Washington, accused of being a Democratic front organization? Didn't they carefully time the release of the Foley information to skew the election? Actually, CREW gave the information to the FBI months before it got into the press, back in July, although the FBI sat on it. CREW would like to know why the FBI didn't investigate. Furthermore, the news leak came from a Republican source, so it wasn't CREW and it wasn't the House Democrats. It's Republicans all the way.

As for the guy from Concord, who decries the tendency of the supposedly liberal media to conceal Democratic scandals, we really must thank him for mentioning Chappaquiddick. I mean, we would never have known about that 37-year-old scandal if he hadn't revealed it to us. After all, the liberal media hushed it up, right? Just like they refused to publish any scurrilous accounts of White House scandals during the Clinton years.

Poor, poor Republicans. All the scandals are theirs now. And soon congress won't be.
Posted by Zeno at 10:30 AM