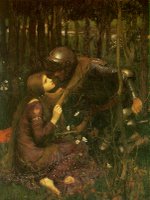 And his damsels in distress

A friend of mine has been unlucky in love. It's a complicated story, but there is a unifying theme running through it.

My friend is, I believe, an incurable romantic who cannot resist riding to the rescue whenever he hears plaintive cries for help. Eight years ago he was taking an evening class, where he met a young woman with a tale of woe. Her cruel husband had cast her aside and retained possession of their only child, a son for whom her heart ached. She seemed wounded and winsome. That was enough to ensnare “Sir Trevor,” who was instantly ready to mount his steed and break a few lances on her behalf.

Long chats over coffee turned into mutual explorations of hopes and dreams, whereupon the lonely lady confided that she wished she had married Sir Trevor rather than her ex-husband, the evil lord who kept her son in chains. Before he knew it, my friend was betrothed. Soon the newly affianced couple was making the rounds of friends and family, Trevor's intended bride doing her simpering best to ingratiate herself with us.

She succeeded admirably in my case. What skills had I, a middle-aged bachelor, to penetrate the sorceries of a subtle temptress? The wedding followed within months of their first meeting and it was a lovely ceremony. (No one knew the bride had already shown her claws when she shredded Trevor's attempts at writing their marriage vows; he had dared to search for ideas on the Internet instead of relying solely on inspiration from his heart.)

The wedding was followed by mounds of paperwork as the new bride filed petition after petition to regain custody of her son. As it turned out, she already had joint custody, as Trevor soon discovered when the boy came to stay with them. His bride, however, paraded Trevor before various tribunals as evidence she was now ready to be a full-time mother to the boy she had abandoned when she left her first husband. Trevor pondered whether his new wife's claims made much sense, as he was left alone with his stepson while she made the rounds of attorneys and family court.

The family court decided to leave the joint custody arrangement as they were. Mommie Dearest blamed her new husband and Trevor gained a sudden sympathy for his predecessor. Perhaps his wife had not shared the full story.

Trevor married his damsel in distress in the summer. By winter she was gone, as were the contents of their joint bank account. She contrived to leave just before the lease on their apartment expired, thereby ensuring that he would be both broke and, in a few days, homeless. Trevor ended up sleeping on my living room couch for a couple of weeks until his next paycheck came in and he found a new apartment.

He chose an apartment with a spare room that could serve as a nursery, for his wife was pregnant when she left him and he hoped to draw her back. She did return to him, checked out the new apartment, and treated herself to a shopping spree on his credit card. With that done, she packed up her purchases and caught the next flight out of town. It was over, but not done.

For almost three years the two of them battled in court over the divorce and custody arrangements for the boy who was born a few months after the final separation. First Trevor won visitations, then he won shared custody, and finally, when the boy was two years old, he won sole custody. From that moment on, the little boy never saw his mother again. She never exercised her visitation rights under the divorce decree, never called to let him hear her voice on the phone, and never communicated with him further except to send the occasional gift in the mail. “Sir” Trevor was now a single father and his ex-wife now had a second tale of woe about bad husbands and lost sons to tell to potential boyfriends.

During the year after the divorce, Trevor devoted himself to raising his son, assisted by family members and friends. I began my weekly visits to spend time with Trevor and the little boy who called me “Uncle.”

At one point, while his son stayed for several days with grandparents, Trevor toured some countries of the former Soviet Union. One of them was the topic of his MBA thesis, so he took the opportunity to get some first-hand exposure to it. While there, he attended one of the mixers designed to introduce eligible single women to American travelers. I don't know, but that might have been one of his reasons for the trip all along. I wasn't privy to the details.

He met a beautiful young woman who caught his eye and he was smitten again. He didn't speak Russian and she didn't speak English, but that was just a detail to the gallant Trevor. They corresponded via intermediaries and she eventually came to the U.S. on a special visa, the kind given to those betrothed to American residents. Trevor married her soon after her arrival in California and his three-year-old son was charmed by his beautiful new mother, who threw herself into an intense program of learning English and making a home for her new husband and stepson. Trevor had once again rescued a young woman from difficult circumstances and set her up in his castle.

That idyll ended abruptly seven months after it began, when a burst Fallopian tube claimed the young woman's life. Her brain fell victim to the internal hemorrhage in minutes, starved of oxygen long before the emergency medical personnel could stabilize her body and stanch the bleeding. A thirty-hour vigil followed while her vital young body struggled to survive without a living brain. When the monitors in the intensive-care unit finally completed their slow, gradual descent to zero, Trevor was single again and his son was again motherless.

The year after his second wife's death, Trevor remarried. His new bride had been introduced to him by a mutual acquaintance who knew the details of Trevor's circumstances. Wife No. 3 therefore entered the arrangement with open eyes, knowing the tragic past and presumably understanding the challenge of instantly acquiring a four-year-old son. Being of a religious temperament, she prayed to God for guidance and grew confident that she was being called to marriage and motherhood.

Her own family was seriously dysfunctional, her parents still married but long separated. Her mother was severely controlling and inclined to launch dishware-smashing tantrums when things did not go her way. A brief attempt to live under the same roof as his new mother-in-law persuaded Trevor and his wife that they desperately needed a separate domicile. The extended-family experiment abruptly ended as they moved out and a period of relatively tranquility began. Trevor, it seemed, had rescued both his new wife and himself (and his son) from an ogre.

Trevor has now been married more than two years, but his wife no longer lives with him. After a string of miscarriages, she decided that God was punishing her for an ill-favored marriage. (She's very superstitious this way, and for some reason sees no contradiction with her previous conviction that God had told her that Trevor was her divinely ordained spouse.) Although she once told me that she was humbled by how unconditionally Trevor's little boy had given his love to his new mother, she now failed to understand that her stepson was the one thing that would redeem her infertility. Did she want children? She had one, if only she would properly appreciate her responsibilities and obligations toward the little boy who loved her. But sacred vows meant little to her now.

Her last miscarriage sent her back to her mother's house, where Mommie Dearest commiserated over her daughter's condition (as one would expect) and told her it was all her husband's fault (as one would also expect, given her own history). Trevor's wife then announced she was going to eastern Europe for three months, to the former Soviet republic from which her family had come (ironically, the same country where Trevor had found his second wife). In the Slavic homeland she would undergo “natural medicine” treatments (almost certainly worth no more than a relaxing vacation, but undoubtedly much more expensive), after which she expected her health and fertility to be restored.

I think it likely that her evident hypochondria will go into temporary remission once the “healers” work their magic on her, but her genuine fertility problems are, I fear, probably going to stay with her. Will she return to Trevor when she comes back to the United States, or will she go straight to her mother's? Will she learn to be a mother again to the seven-year-old who hasn't seen her in more than a month, or will she tell her estranged husband “that's your problem” again? Perhaps it depends on what “God” tells her this time, prankster that he evidently is.

Sir Trevor has rescued three damsels in distress and is still searching for the joyful conclusion where he and his bride and his son live happily ever after. Right now it seems out of reach. He is once again playing the bachelor father and wondering if things will ever go right for him and his little son.