Fill in the blanks

My colleague James was nonplussed—never a good situation for a math teacher. One of his students was going to miss a session of their statistics class because he would be out of town for a soccer game. The student dutifully gave James the necessary permission slip, signed by his coach, to excuse the absence and enable the student to make up any missed work. Unlike other absence forms James had received, this one stood out as rather special.

Being a rather crafty fellow, the soccer player carried the permission slip around in his pocket for a few days (as was apparent by the slip's crinkly condition) and tucked it under his teacher's office door at the last minute. This maneuver ensured that James could not give his student some alternative assignment to do over the weekend while he was on the road. Clever student athletes know that it's always better to put off academics till the last minute whenever possible.

Okay, I know that's not true. Some athletes are actually good students. The existence proof is very simple: I knew one once. It wasn't this guy, though, as demonstrated by the permission slip he filled out for James. Consider for a moment. How would you fill these blanks in an excused absence form?

Our soccer-playing hero came up with a solution that probably would differ from yours:

Yes, that's right. He responded to the prompt “on [Date]” with “on the team bus.” Check the scan of the original form below. It didn't scan well because the paper was so wrinkled, but I darkened the text in question for you. Perhaps you can make it out. See? I wasn't kidding.

Well, we all have our off days. Not to be confused with days off. 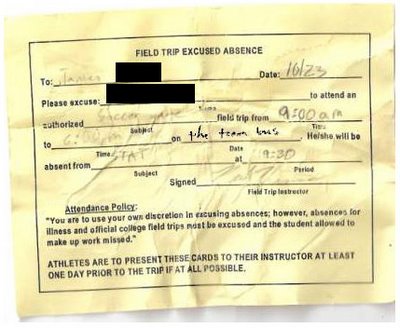 What's worse...the fact that the student wrote "on the team bus" or that the instructor (or coach) signed the form after the student had written it?