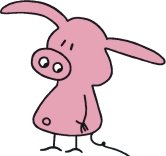 Pearls gets there early

The comic strip Pearls Before Swine ran a series on animal psychics a couple of years ago. Cartoonist Stephan Pastis wasn't specifically talking about animals who are psychic (although given the animal population of his strip, it's not like he could really avoid it). Rather, he was taking a swipe at those “pet psychics” who will read your animal companion's thoughts for a fee. A pretty vital service, wouldn't you say? (And people who call their pets “animal companions” are probably the main focus of this particular scam.)

There's no form of fraud that Rat is unwilling to try, so he quickly hung out his shingle as a pet psychic. Eventually, though, his activities result in a congressional investigation. Oh, Rat is in trouble now! How will he ever persuade the honorable members of congress that he is truly psychic? 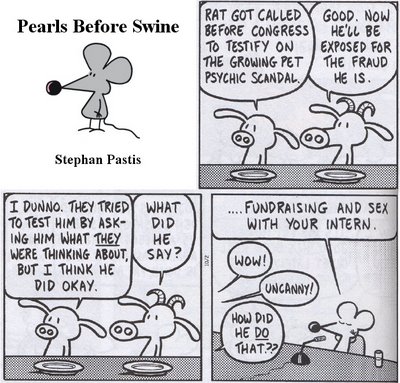