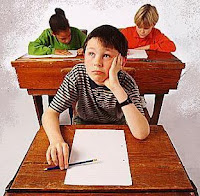 Some with presence of mind

Students naturally groan when their teachers whip out a pop quiz. Mine are no different, except perhaps that they're a bit more jaded. There's not a lot of “pop” in a quiz when it's anticipated as a routine part of the class. I prefer short in-class quizzes as an alternative to collecting and grading homework. The results show me whether my students are following me and the degree to which they're mastering the material.

Eventually, many of my students figure out that keeping up to date gives them a major edge in quiz-taking. Some begin looking forward to quizzes as opportunities to rake in some fairly easy points for knowing basic material. They begin to anticipate quizzes and even ask for them. (By no means do all students do this!) This recently reached a fever pitch when we were approaching the end of the class period and no quiz had been given. I was disappointing them. We got down to five minutes.

“We're down to five minutes,” I said, displaying my gift for the obvious. “What can we do with only five minutes?”

“Let us out early!” chorused a few—always a crowd-pleasing response.

“Give us a quiz!” cried another group (quite distinct from the first, I might add).

Most of my quizzes are more than five minutes long and I had not prepared one.

“How can I give you a five-minute quiz? That's not enough time.”

“Make it easy!” they sang out.

“Well, I did once give a one-minute quiz,” I admitted.

Consternation and curiosity appeared on their faces.

“It was an attendance quiz,” I continued. “The quiz was ‘Write down your name.’”

I don't actively take roll after the first few days of a semester, but the frequent quizzes do a good job of tracking attendance. I expect my students to show up and I'm disappointed when they don't. I also like rewarding good attendance and had not yet taken any special steps to do so that term. The students (even the ones who wanted to leave early) brightened at my suggestion.

“Okay. Deal. Take a piece of paper, write your name down, and hand it in.”

There were ripping sounds as paper was torn from notebooks.

“Is it okay if we share paper?” asked one green-minded student.

He and two other classmates used one sheet of paper to submit their names.

Another student strolled up and handed in his paper. He had written “your name” on it.

“I thought it might be a trick question,” he said with a smile. “You said ‘Write your name.’”

He had also written his actual name across the top of the paper.

The next student had drawn a box around her name, like the answer at the end of a calculation.

Jonathan then handed in an odd piece of work:

“I started to cheat off Jessica's paper,” he said, “but then I figured out how to do it on my own.”

“That was good of you,” I replied.

Then Ian sauntered up and placed his paper on my desk:

"You didn't say how many decimal places of accuracy you wanted, so I assumed four.”

“Uh, thanks. It's true that your name would go on forever if it's irrational.”

The next student had quadrille-ruled graph paper. He had written his name in block form by tracing grid lines.

“You didn't provide equations,” I pointed out.

He grinned and handed it in.

My students are a curious lot, but I'm sure I'm not responsible for this condition.
Posted by Zeno at 7:00 AM

I don't think pop-quizzes are that common Denmark, but perhaps I should consider them. I have no idea how I'm supposed to keep track of a 110 students and supply them with quarterly performance marks. (At least I think I have to do that.)

Students making jokes is almost like they are thinking about the assignment, isn't it? Seems like you're a hell of a lucky teacher. :)

Yes, Joe, most days I do feel like that.

What a refreshing classroom story. Yeah, it sounded as if the students were actually interested, paying attention, and applying themselves in a creative way. What an interesting concept for a "school".

I wonder if anyone will have the nerve to ask for a make-up? :)

Did everyone pass? ;P

Sili: You might want to look at the "SCALE-UP" program.
http://www.ncsu.edu/per/scaleup.html