Judging a book by its author 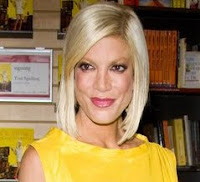 Something I don't need to read

Nepotism poster child Tori Spelling is on a signing tour to promote her new book. The formerly reputable McClatchy Company is helping out with breathless little stories like an interview article in The Sacramento Bee:


There's an anecdote in it about you contacting the late Farrah Fawcett.

It was during a reading on the phone with (celebrity psychic) John Edward. We have the same publicist. I thought, “Oh, this'll be cool, maybe my dad will come through.” Instead, John said, “Farrah Fawcett's coming through.” He was really surprised, too. She wanted me to let her family know she's happy and OK. I wrote a letter to Ryan O'Neal, explaining the story. I said, “Please don't think I'm crazy, I'm simply passing on a message.”

Gosh, Tori? Think you're crazy? Never! Think you're gullible and maybe just a little bit stupid? From now till eternity!

Perhaps I am being too mean. After all, she shares a publicist with John Edward, famous for being “The Biggest Douche in the Universe.” It may be that Tori is just a good little trouper who cooperates with her p.r. person in trying to gin up some press coverage for a fellow celebrity from the same stable. I can't tell, though, if Tori is being cynically manipulated or just cynically playing along.

In a way, of course, it doesn't matter. The stupid is right there on the page for us to see.

Let's look the other way.

Is she still alive? I thought she had died years ago.

Judging from her publicity photo, she may have been replaced by a plastic mannequin. But no one can tell when that happened.

Ever get the feeling that the dead are just playing with John Edward? They keep giving him messages for the wrong people, kidding around about their initials, leading him down the garden path... You could feel sorry for him.

Until you remember he's a lying piece of garbage preying on the bereaved and broken, of course.