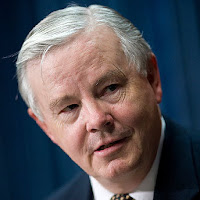 It blows through Joe's ears

Everyone knows Joe Barton now. He's the Republican congressman who apologized to British Petroleum because of its treatment at the hands of the Obama administration. The president, you see, is holding BP responsible for the consequences of the catastrophic oil spill in the Gulf of Mexico and that—gosh darn it!—makes a grown Republican want to cry. Imagine beating up on a corporation! Why, it would make the angels weep!

Do you know what happens if the GOP gets a majority in the U.S. House of Representatives after the November general election? Rep. Joe Barton becomes the chair of the House energy committee. That's right: sob sister Barton would be in charge of energy legislation.

We know from Barton's cloying prostration before BP's CEO that he is in the pocket of the oil industry. Is there anything else relevant to his qualifications to lead the energy committee? Perhaps it's his keen grasp of matters scientific:


Wind is God's way of balancing heat. Wind is the way you shift heat from areas where it's hotter to areas where it's cooler. That's what wind is. Wouldn't it be ironic if in the interest of global warming we mandated massive switches to energy, which is a finite resource, which slows the winds down, which causes the temperature to go up? Now, I'm not saying that's going to happen, Mr. Chairman, but that is definitely something on the massive scale. I mean, it does make some sense. You stop something, you can't transfer that heat, and the heat goes up. It's just something to think about.

Yes, it really is something to think about. Poor Joe Barton needs some serious remedial science education. I mean, everybody knows that the wind is caused by trees. When trees wave back and forth, they stir up the air, causing wind. It's simple observation, people!
Posted by Zeno at 6:00 AM

Oh my dog! That is the stupidest thing I have read since dubya left office. Of course I can imagine Glenn Beck saying something just as stupid.

I can't even follow what he's trying to say there, except of course that it boils down to the usual denialist cry of "we don't know for sure yet, so do nothing" -- as if continuing to dump massive amounts of greenhouse gases into the atmosphere constituted "doing nothing".

And if I might try a minor, logical observation: when air gets hot, it rises, causing surrounding, cooler air to move in. So it's the cooler air that moves because of the heat, not the hot air moving to "areas where it's cooler." I know, I know, it's a waste of time, but I just had to say it.

And it's not like slowing the rate at which heat flows around the Earth would increase overall temperature. If anything, using wind energy would very slightly decrease temperature, since energy, rather than remaining in the wind to eventually become heat again, would be converted into useful energy. Seriously, you don't need to know much about wind, you just need to understant conservation of energy to know that he's just peddling BS.

When something is hot, you blow on it to cool it off. Therefore, wind blowing on the Earth cools the planet.

I'll bet you a million dollars that's exactly what Barton is thinking.

I always thought wind was caused by politicians opening their mouths.

Story vaguely recalled from Latin class urh-eh years ago: A faun once met a man in the winter. He saw the man blowing on his hands, and asked why the man did that. "To warm my fingers," the man said. The two ended up eating together and the faun saw the man blow on his soup. When he asked why, he received the answer: "To cool it." The faun then abandoned the man, saying, "I won't associate with one who blows both hot and cold."

Even i can make wind, and in addition my wind makes the heat smell funny!