When P.Z. Myers shared the happy news that Conservapedia honored him with its article of the week, I naturally had to see for myself how he was being celebrated over at Andrew Schlafly's Fortress of Ineptitude. It was a fun-filled visit, punctuated with peals of sudden laughter at the many pages of inadvertent humor.

These guys are funny.

While I was there, I had to revisit the Conservapedia entry on President Obama, which I cruelly mocked in a post last year, just before the presidential inauguration. Naturally, I was curious to see whether it had been improved in any way.

The answer depends on whether your metric involves laughter.

Here is the opening paragraph:


Barack Hussein Obama II (birth name Barry Soetoro,[1][2][3] allegedly born in Honolulu August 4, 1961[4][5][6][7][8]) is the 44th President of the United States, and the first President who is biracial. He previously was associated with several radical causes[9] and served less than four years as a first-term Democratic Senator from Illinois (2005-2008).

Try to remember that this is supposed to be a source of reliable information (“The Trustworthy Encyclopedia,” they claim). Were you able to spot any mistakes? I admit I wondered how the president's birth name could be “Barry Soetoro” given that Lolo Soetoro was his step-father and was nowhere on the scene when Barack was born. Both birth announcements in contemporary Hawaiian newspapers reported that the father was Barack H. Obama. The president's birth certificate (I know, I know; Schlafly and his crew refuse to accept Hawaii's official document) gives his name as “Barack Hussein Obama II.”

After a flub like that, I'm surprised that Conservapedia got his presidential number right. Yes, it is 44. They also noticed that he did not serve out his term as U.S. senator. Good catch! (Getting elected president does that to you.)


Upon taking office Obama promised relief for unemployed workers and warned failure to pass his proposed stimulus scheme would turn a “crisis into a catastrophe.”[10][11] The unemployment rate has hovered in the 10% range throughout his presidency, up significantly from the 7.8% rate in January 2009. Since passage of the president's stimulus package, 2.4 million Americans have been added to the unemployment rolls.[12]

Conservapedia loves post hoc, propter hoc insinuations. The stimulus package passed and then unemployment soared. There are two reasons for that which most sane people are able to identify: (1) the stimulus package wasn't big enough (and Paul Krugman warned us, too!) and (2) the collapse of the U.S. economy under the Bush administration still had plenty of momentum in January 2009, right when its chief enablers scrambled out of town. Who knows how much worse off we might be without the cushioning effect of the stimulus package (which, once again, was not large enough).

Such careful choosing of time periods! (Cherry-picking, anyone?) Why not compare Obama's first year with Bush's first year. Oh, yes. September 11. Too bad about ignoring terrorist threats until it was too late (and then exaggerating them for political benefit and war justification). I will admit, however, that I like the quotes around the “War on Terror.” Is Conservapedia admitting that the president is merely avoiding some of the cant phrases and reducing the bully-boy rhetoric that characterized the Bush-Cheney years? That's certainly a relief. In the meantime, in terms of reality, Obama is aggressive against terror in ways that may or may not pay off. You know, little things. Little things like tripling the number of drone attacks against targets in Pakistan. I have my doubts about it, but the Conservapedists should be yelling their heads off in support.

The president is not anything close to a pacifist, but his actions are not loud enough or indiscriminate enough to please the troglodytes who live in the dark caverns of Conservapedia.


President Obama authorized offshore oil drilling in the Gulf of Mexico[19] and has been widely criticized for mishandling the “worst environmental disaster in US history.”[20][21] Obama declared, “oil rigs today generally don’t cause spills. They are technologically very advanced.”[22][23][24]

Well, generally they don't cause spills. There's only one that really causing trouble right now. Of course, it's a doozy. That's the catch. One big spill can do gigabucks of damage. That's why many people reacted negatively to the president's comments about authorizing more oil drilling. However, the drill that spilled was in place long before Obama said anything. The disaster was a legacy of Bush administration neglect and lack of enforcement of safety standards and procedures.

The Gulf spill might, of course, have been mitigated if the Obama administration had promptly ramped up safety inspections and enforcement of maintenance regulations, but I can easily imagine how Schlafly and his minions would have reacted. “Anti-business!” (I think it was Stalin—or was it Hitler?—who was really keen on state enforcement of safety regulations.)

Sentences like this don't get constructed by accident. Schlafly really wants readers of Conservapedia to think that BP's Gulf of Mexico disaster was the direct consequence of Obama's statement about offshore oil drilling.

The president's words are powerful.

The initial paragraphs of Conservapedia's entry on Barack Obama is all of a piece. A piece of propaganda. The article deliberately misleads. That's curious, isn't it? The overtly religious perpetrators of such mendacity are evidently so full of good intentions that they regard themselves exempt from the commandment about bearing false witness.

The morality of the people at Conservapedia is very much like the God they purport to follow. There's damned little evidence for the existence of either. 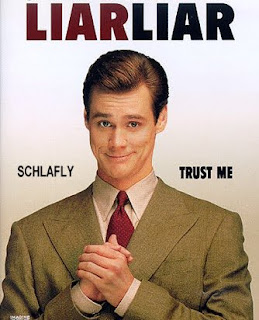 They've conveniently buried the anthrax attacks under the rug, too, and the anthrax copycat attacks, but those only affected Democrats and were perpetrated by one of theirs, so they don't count.