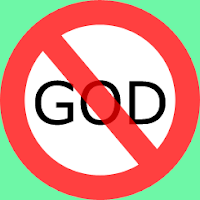 It's fun to read the letters to the editor. One learns so much about the way other people think (or don't!). Last month someone decided to give everyone the benefit of her deep thought and reasoned argument. She was upset that Proposition 8 was being challenged in court:


We have the right to preserve and protect the definition of marriage. We did so, twice. We have voted. Judge Vaughn Walker should uphold our vote and not be swayed by the unhappy minority. Judges are to interpret the law, not make the law. Again, the majority has voted. Uphold the vote and be done with it. Quit listening to the minority of California.

I guess it doesn't matter that this might be a matter of fundamental human rights. A majority of the voting population should be allowed to trample upon them. (I also presume that the letter-writer sees no significance in the falling level of support for hetero-only marriage in the two votes she cites. Third time could be the charm! It ain't over, baby.)

Nevertheless, the writer's abasement before the god of majority rule makes me wonder how far she would allow it to be taken. I'm pretty sure she would pull up short if I were to point out that the majority opinion is against her religion. While nowhere in her letter did she mention religion, Proposition 8's noisiest supporters are right-wing Christians—and Christianity is a minority religion.

Let's do the math. While membership numbers are often unreliable and religions aren't required to audit their membership rolls, it scarcely matters. Most of the 6.7 billion people in the world will reject any particular religion you claim to name. Let's look at Christianity, since that's America's most popular religion. 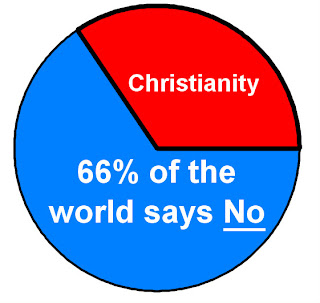 Only 34% of the world's population purports to be Christian. Thus our nation's most widely shared delusion is spurned by a two-to-one margin. In political parlance, that would be a landslide.

What about Islam, which considers itself the religion fated to replace Christianity (and, for that matter, all other beliefs). The news isn't so good. 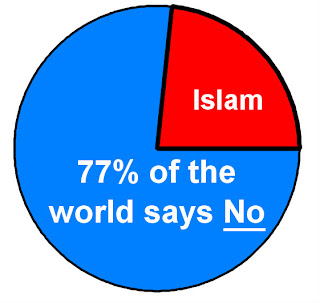 Yes, Muhammad's followers are on the wrong end of a three-to-one split. That's got to be discouraging. And it's downhill from there for other forms of devotion. Buddhism can scrape up a similar number of adherents if you generously aggregate all of its many flavors (much as I did with the sects in Islam and Christianity). 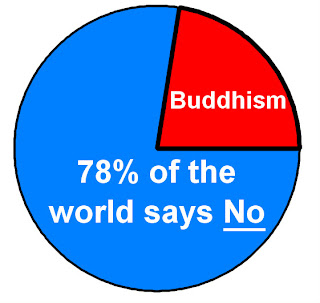 It's barely one out of five. However, that's still better than Hinduism, which can claim almost one person in six: 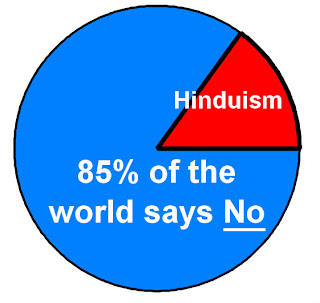 There is no winner. The religions are all obvious losers. Furthermore, these demographics almost certainly represent best-case scenarios where casual or lapsed adherents may be bundled into the head count.

Sometimes I wonder if my home parish still has me listed as a member of the local Roman Catholic congregation. It's possible. The church register is notoriously unreliable. If so, this final result is also inflated. 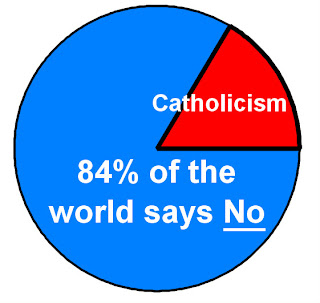 Sorry, Benny Hex. You don't have any many followers as you think you do—and the ones you have are terribly outnumbered..

All religions are therefore minority religions. Folks who are eager to tromp on minority rights might want to keep that in mind while they are embracing majority rule and demanding the right to gang up on others. Next time it could be your turn.
Posted by Zeno at 5:00 AM

this is what happens when someone believes that his opinons and beliefs, his little corner of this dot, his infinitesimal slice in time, is the entirety of existence.

That's true. And the funny absurdity is that even though Christians are the majority in this country, they are so fractured and divided among themselves that they are constantly warring with one another (at least they are here in Southern Idaho).

I think it's time for people to re-think what family means. It should mean a unit of people who work together to support and nurture each other - and not a referendum on sexual behavior. But that's just me.

This is very interesting! I am going to share a link on Facebook, but where did you get your numbers for the graphs?

The pie charts are based on the numbers found in Wikipedia's article on major world religions. Since more than one number was often given for each sect or cult (Wikipedia acknowledges their unreliability), I generously chose the largest of the claimed numbers.

I like http://www.adherents.com/Religions_By_Adherents.html for the breakdown, possibly because they explain their data sources and classification methods.

For the mathematically inclined, Arrow's impossibility theorem is a fun little exercise in democracy theory.

Interesting when you see the bigger picture isn't it? (Sorry if the link doesn't work)

That's not the "bigger picture," Anonymous. That's actually the prelude to a series of religious wars. Let's put the 86% "religious" majority in an arena to thrash out whose "one true religion" is really the one while the 14% non-religious sit in the bleachers and have popcorn.