Lisa Benson is the talented political cartoonist who never lets reality mess up a good storyline. She leaves no daylight between herself and the right-wing talking points of the day. In the main, Democrats are always stupid, incompetent, or evil and Barack Obama is an ignorant ideologue. (That seems a bit like projection to me.) Here's a recent example: 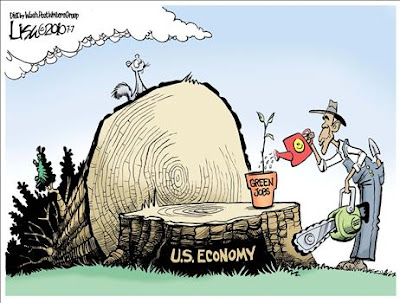 See anything wrong or misleading about it? While we understand that the political cartoon is not a format that lends itself to detail and nuance, it still seems a terrible oversight to have omitted a “George W. Bush was here” sign on the stump of America's economy and a GOP sticker on the chain saw (which Obama undoubtedly found lying next to the fallen tree). Lisa probably knows that the economy was actually devastated under the stewardship of Obama's predecessor, but let's be fair: she's simply doing her job as a right-wing propagandist. I guess we're supposed to take this in stride.

Because, you know, everything is fair in love and war—and politics. Even lies, apparently.

As a math teacher, however, there are certain lines that I cannot bear to see crossed. Check out this peculiarity: 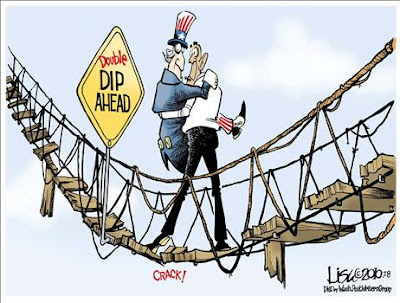 Today we all know that the original Obama stimulus was too small. (Paul Krugman warned us at the top of his lungs, but most of us ignored him at our continuing peril.) Hence the risk of a double-dip recession is all too real. While the Great Recession itself has George W. Bush's oil-stained fingerprints all over it, a second dip—if it occurs—will owe much to Obama's timidity at the beginning of his tenure (and his foolish penchant for seeking bipartisanship from an opposition party that doesn't know the meaning of the word).

So what's wrong with Lisa's double-dip cartoon? It seems more on target than most, and even depicts the president as trying to carry Uncle Sam across a perilous chasm. It's this: How the hell does one get a double-dip in a rope bridge, for crying out loud? Catenary curves are uniformly concave up (as they say in calculus class). Benson has deeply offended my sense of mathematical reality.

Much as she often does my sense of political reality.
Posted by Zeno at 10:00 AM

I almost hesitate to answer, since it is so obvious, but I'm quite sure that, just off to the left, is a large pole that supports the centre of the bridge.

Well, it's a thought, Ray, but have you ever seen a rope bridge like that?

We must be seeing the back side of the bridge since Obama is known to be both left-of-center and backwards on economic issues. This means that there is plenty of room to the right for a dubious poll to prop up support for an unrealistic view.

She's not even that good a cartoonist.

Until you pointed out I was wrong, I thought that first one was supposed to be Bush.