No separation of church and press 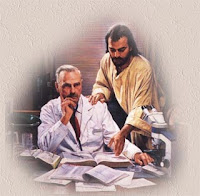 Oleg Savca is a lucky boy. According to the Sacramento Bee, Oleg is an 11-year-old Moldovan who has undergone successful brain surgery to remove a tumor. The medical procedure, conducted last month at Sutter Memorial Hospital in the state capital, almost certainly spared him from a painful death. Oleg is feeling well enough now to return home, thanks to the doctors whose skills saved his life.

Oops. Sorry. Did I say “doctors”? I meant to say “God”! That's who saved Oleg's life, you see. I know because I read it. Here are some direct quotes from the Bee's article (emphasis added):


He was first diagnosed with hydrocephalus, a buildup of fluid inside the skull. When doctors found the tumor, they told the family they did not have equipment to remove it.

“They didn't even have the microscope—didn't have the ability to see what they needed to see,” said Dr. Samuel Ciricillo, medical director of the Sutter Neuroscience Institute and the neurosurgeon who would eventually operate on Oleg.

Left alone, the tumor would put Oleg into a coma and ultimately kill him. What happened next Zina Savca can attribute only to divine intervention.

The Savcas' doctor, Andrey Plesco, visited Sutter Memorial in late April on a professional exchange. He saw Ciricillo operate and realized Ciricillo could save the boy.

Apparently Dr. Plesco realized in some kind of divine vision that Oleg needed a brain surgeon and that Dr. Ciricillo is a brain surgeon. Nice of God to intervene that way. It's not as though Dr. Plesco could have recognized the connection on his own.

Next time, though, consider not giving the boy a tumor in the first place.
Posted by Zeno at 11:30 AM

Why do you not believe?? God pulled the strings that got Dr Plesco that exchange program! Obviously!!!

And he HAD to give the child a brain tumor, because how else could he pull off the professional exchange MIRACLE???

My goodness, it's hard to get people to believe in miracles these days. What do you want: tumors that become luminous and melt away into thin air? ANYBODY could believe in THAT!