Bless me, Father, for I have sinned 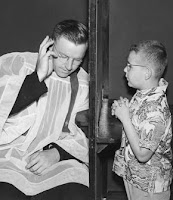 Sinners in the hands of an overworked God

It was my grandmother's idea. That's what made it so surprising. You expect the matriarch to be punctilious in her devotion to rituals of the family's longstanding religion. The Ferox clan had been fiercely Catholic for hundreds of years.

Nevertheless, she was getting a bit exasperated with the long lines of breast-beaters at the confessional in the back of the church. As we sat patiently in the pews, it seemed that once again the over-zealous penitents would delay the start of Sunday morning mass by relating to Father every minuscule detail of their trivial trangressions. Perhaps they derived a thrill by imagining themselves to be living sinfully sordid lives.

“I know how to speed it up,” said my grandmother.

My ears pricked up in sudden attention. This was unusual.

“Speed it up? How, Avó?” (That's the Portuguese word for grandmother.)

My grandmother looked me in the eye, her lips quirked in a shape that was not entirely unlike a smile.

“Father should stand up in the front of the church and read a list of sins. Just the most popular sins. Stealing. Cursing. Drunkenness. Adultery. Each time he calls out a sin, you raise your hand if you committed it. When he's done with the list, he gives everyone absolution and we all say five Our Fathers and five Hail Marys. Very fast. Start mass on time.”

My smile was less subtle. In fact, I was grinning back at my grandmother like an idiot.

“That's a great idea, Avó! I'm afraid, though, that it wouldn't be as fast as you hope. People would slow it down by looking around all the time and checking out each other's sins.”

Now my grandmother's smile was breaking out into the open.

I told Father about it later. The old Irishman laughed till his face turned purple. He never gave it a try, though. Too bad. I was willing to say an extra Our Father and Hail Mary if I got to look around.

Now THAT would be an interesting mass...