Let us pray: for money!

The envelope bore a stern warning: Portrait Enclosed. DO NOT BEND. Naturally, I was excited. A portrait? For me? Oh, what could it be?

Such mail usually comes from politicians seeking contributions and contains cheap mass-produced prints of the candidate on the stump or posing in front of a flag. I guess that the pictures are called “portraits” because they're printed on card stock instead of regular paper. However, I quickly discerned that this was not a political solicitation. The return address on the envelope declared that this was a missive from the Pope John Paul II Cultural Center.

Praise be! Surely I would be spared the usual money-grubbing appeals that typify political mailers. This packet was about culture, which I'm all in favor of.

I tore it open and found a letter inside. It quickly became apparent that the JP II Cultural Center managed to hire a writer that usually composes money-grubbing political appeals for politicians. The differences between the JP II letter and a campaign mailer were not just small—they were nonexistent. See for yourself. All emphases are from the original:


Dear Mr. Ferox,
What wonderful news — our beloved Karol Wojtyła is closer than ever to being declared Blessed and among the saints. On behalf of The Pope John Paul II Cultural Center, I want you to have a special commemoration of this joyous occasion.
Enclosed you will find a limited edition Collector's Portrait of Venerable Pope John Paul II by Andrzej Gosik from the Cultural Center's private collection, given to us in 2002 by Jolanta Kwasniewska, the First Lady of Poland. It is embossed with December 19, 2009 — the date upon which he was declared Venerable by Pope Benedict XVI, and recognized as a man who lived a life of “heroic virtue.”
I believe you share my love of, and admiration for, this extraordinary man. That's why you have been selected to be among the first to receive this unique commemorative portrait.
Well, thanks, but you shouldn't have gone to so much trouble.


And because it is a collector’s item, I am keeping close track of each portrait I send out. I would hate to think that yours was lost in the mail.
So please, take a moment to complete the enclosed Portrait Receipt Verification and return it to me today — that way I will know that your portrait arrived in excellent condition.
Yes, I can imagine that you must be waiting fretfully by your mail box. Too bad about my having opened the envelope, though. Collectibles are more valuable if you keep them sealed in the original container. The still-in-the-box G.I. Joe will help fund my retirement some day.


Mr. Ferox, I hope you will also include a special tax-deductible contribution of $35, $50 or even $100 or more, if you can, to support The Pope John Paul II Cultural Center. With your generosity, we will continue to honor the extraordinary work and ministries of our late Holy Father — a living witness that has now earned him the title of Venerable.
That's “Dr. Ferox,” to you, buddy. And now I see that the special Portrait Receipt Verification contains check boxes where I can indicate how much money I'm sending you. Hmm. I guess that would make sense if I wanted to help promote the views and policies of JP II. (Looks like a miscalculation on your part.)


Let this Collector's Portrait of Venerable Pope John Paul II serve as a reminder that our late Holy Father is now one step from beatification. Let it serve also as a reminder that, by supporting our Center and making our work possible, you will be helping us share the timeless teachings and Christ-like leadership of the Servant of God John Paul the Great.
Shouldn't there have been a comma in there somewhere?


We honor the wisdom and courage of Pope John Paul II through exhibits and events that celebrate his life, and the teachings of the Catholic faith.
At the Center, we offer special art exhibits, such as our annual showcase of hundreds of Nativity Scenes from around the world. Highly anticipated each year and covered extensively in the media, this unique crèche exhibit reminds us all of Pope John Paul II’s love of Mary, our Blessed Mother, exemplified by his words of devotion: “Totus Tuus.” Thousands of people came to see them at Christmas and thousands more saw them on television!
This may come as a shock to you, but the promotion of cheesy Christmas displays is not high on my list of priorities. Devotional kitsch is my mother's hobby, not mine. I recall in my home parish that the Christ child would be omitted from the manger scene until the day of Christmas itself. I pointed out that this was a miracle because Mary didn't look pregnant in the lead-up to this event. My theological musings were not appreciated, as best as I can remember. Actually, I think Mom hit me and told me to shut up.


Through our Catholic Intercultural Forum, we welcome scholars of many faiths for interreligious dialogue, and discussions on the intersection of faith and culture — topics that were of great interest to John Paul the Great. He gave so much of himself in working to bring peace among the world's religions, and to bring our Catholic faith to a greater audience. We honor his work by continuing it, as Pope Benedict XVI told us to do!
Those scholarly discussions with members of other faiths sounds very positive. Everyone should be allowed to worship Jesus in his own way.


At our Center, we serve causes that were of great importance to Karol Wojtyła. For example: Each year The Pope John Paul II Cultural Center is a popular gathering place for those who pilgrimage to Washington, D.C., for the annual March for Life. People come here to rest and to pray — and to learn about John Paul's commitment to defending the sanctity of all human life.
You are being too modest here. John Paul's devotion to life went well beyond human life. He supported life for the human immunodeficiency virus, too, strictly forbidding men to frustrate the HIV reproductive cycle by using condoms to protect their sexual partners. Every sex act must be open to the possibility of infection.


Your support will help The Pope John Paul II Cultural Center sustain these and other programs that promote our faith and advance the teachings of our late Holy Father. We emphasize his personal sanctity — and we see to it that the teachings of John Paul the Great are never forgotten, and that these teachings will continue to inspire our world and enrich our culture.
The Collector's Portrait of Venerable Pope John Paul II which I've enclosed for you honors your commitment to the legacy of John Paul II. His sainthood will make that legacy complete — and on the date embossed on your portrait, the day of his having been declared Venerable, sainthood drew closer to reality. Now, all of us wait with great anticipation to learn of a miracle that would confirm beatification for John Paul II... for us and for the world!
I'm having a miraculous vision right now! I see the Vatican announcing that some lucky Catholic will experience a spontaneous remission of cancer and attribute it to the intervention of the dead pope. (With a billion nominal Catholics in the world, I like those odds!) I also have a prediction: The Church will not announce that a double-amputee has miraculously sprouted new limbs after praying to the dead pope. (I may not be pope, but I'm pretty sure I'm on infallible ground here.) No, spontaneous remission is definitely the way to go.


Our Cultural Center will provide you with full details of each step the Church takes in this continuing process — and we will faithfully use your generosity to share the holiness of his life. After all, he called each one of us to be saints of the new millennium!
Will each step be accompanied by a new solicitation for funds? (How many portraits did you order from the printer, anyway?)


Please let me know that our Center can count on you for your support — and, using the Portrait Receipt Verification I've enclosed for you, please let me know that your Collector's Portrait of Venerable Pope John Paul II, embossed with the date of his having been declared Venerable, arrived in good condition. Thank you.
Sincerely yours in the Lord,
Father Steven C. Boguslawski, O.P.
Executive Director
The Church teaches that one can sin in one's mind without actually committing the act. It beefs up attendance at confession that way, so it's good marketing.

Bless me, Father, for I have sinned. I laughed when I read your name and thought it was highly appropriate. That wasn't nice. Your name is not your fault.

But the letter is. And I'm not too crazy about the enclosed portrait, either. 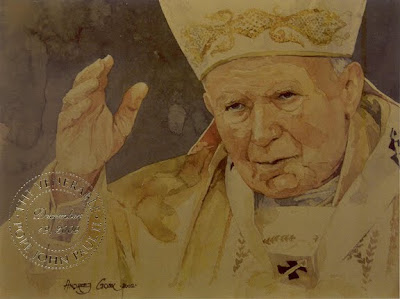 I also refuse to believe the Wojtyla would support anything that doesn't have to do with skiing.

Yesh, that's it. Healing wonky knees must be the defining miracle for this pope.

Look on the bright side, though. They coulda been sending you photos of Ma Teresa.

I loved your comments ... I do hope that you really send them back to the JP II Cultural Center in response to this odious begging letter. Crap pic too!

Speaking of nominal Catholics, how'd you get on their mailing list, anyway? You should do that "take me off your rolls" thing (so should I).

It is rude and unkind to laugh at people for their names. People can't help the names they're born with.