The ghost in the exam

Consider looking at the problem!

Millions of people cheerfully and indiscreetly post details of their personal lives on the Internet, forgetting that Internet posts have a kind of digital immortality. Thanks to archiving and caching systems, erasing a post doesn't necessarily make it go away.

It's also true of education websites, such as the one where I have occasionally posted exam keys for the benefit of my students. One diligent young fellow nosed about through the Intertubes till he dredged up a cache of some of my old posts, although they had been deleted from the original website. Eureka!

He took careful note of his discovery. In fact, the evidence suggests he memorized some of the indicated results. He must have been quite proud of his achievement when he encountered and quickly recognized the following graph on his math exam: 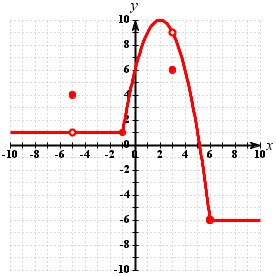 It looked so familiar! When the accompanying problem asked him for the values of f(−5) and f(3), he promptly and confidently wrote down 5 and 7. Amazing! And both wrong!

I tend to rewrite—or at least tweak—my exams. He didn't notice that I had changed the figure from the one he had seen: 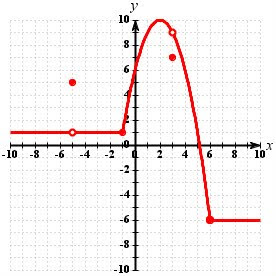 He really should have spent the time studying instead.
Posted by Zeno at 4:30 PM

My thesis advisor, Dave, likes to tell a story about a student in an upper-level General Education course who just couldn't make it to the exam. Now, Dave is a kindly soul and will assist students by providing make-up exams. So this student hemmed and hawed and issued excuse after excuse until the rest of the exams were returned. Then he showed up to take the exam.

Dave set him to taking the exam in his lab, and noticed in pottering about that the student seemed to be on his cell phone a lot. But again, being a kindly guy, Dave didn't ask any questions. The student finished the exam and Dave graded it. And... EVERY answer was wrong. BUT if the student had been taking the ORIGINAL exam that Dave had given to his class, every answer would have been right.

The student had photographed the corrected results of the original exam, and was simply copying the answers without looking at the questions. Dave took great delight in awarding that 0. But when he confronted the student, the latter was just disappointed, not abashed. As far as the student was concerned, the point was to get a good grade, not to learn anything.

Of course nowadays Dave doesn't permit cell phone use while taking exams, and in crowded classrooms he issues differently-ordered exams to odd and even rows. But he still shakes his head at the student who thought he was stupid enough to give a makeup exam that matched the original after the original had been returned.

I think you need to drop the banhammer on the nutbar from Montreal. Though if he's interpreting the burning down of Touchdown Jesus as an anti-atheist message, then it seems to me that he's admitting that his supposedly omnipotent god has lousy aim. It's been speculated on other sites that the real target was the Hustler Store across the street.

Rhoadan, you're giving the limits at x = −5 and x = 3, not the actual function values indicated in the graphs (which are the isolated red dots).

When I took Engineering Mathematics at Washington Univeristy in the 1990's, the professor had a habit of reusing his test every three to five years. But it was an open note test, and the fraternities all had back files going back some 30 years that this professor had been teaching the class.

I knew this, and one person I knew was bragging about how none of the greek students had to study, because the old fool used tests from the past and the frats had them all. They were just all bringing in the stack of 5 or so tests that a brother had done perfectly.

So I went to the professor a week before the test, and told. I said that I had worked very hard, and didn't want to have my score on the same curve as people who, while not cheating (it's an open note test), were being, in my opinion, duplicitous.

The test arrived. It was a brand spanking new exam. Never seen before. And, in fact, it was EASY. Not just because I had in fact studies hard, but I think that the professor really did want to see if anyone had actually studied, or if many people relied on the backfiles.

I got a 97 or so, and aced the class. The entire greek system failed (this was a class of about 80-100 students). And I was glaaaaaaaad.

I came down with mumps in the second semester of my freshman year (and yes, I had been immunized, but the vaccines in the late 1960s were only about 80-90% effective). Between the time lost being sick, and the adjustment from highschool to MIT, I realized that I would be unable to catch up with all my courses, so I dropped one, with the intent to take it again the next year. So, the 2nd time around, I coasted through the first part of the course, until one day I got a problem set back with a grade of zero, and a note in red telling me to do my own work, and not copy last term's questions. Throwing myself on the mercy of the TA, I confessed that, yes I had copied the question from last semester, but as I was taking the course myself at the time, I was only copying my own work. He graciously gave me 80% of the marks back (and I resolved to always read the question in future).