The Club of Rome 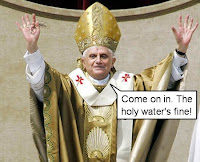 Look what the pope dragged in

Jesus is criticized in chapter 15 of the gospel of Luke for hanging out with sinners. Given the company he's been keeping lately, Jesus may be in for some more negative publicity. Newt Gingrich has been born again as a Roman Catholic, having been received into Christianity's oldest sect on March 29, 2009.

By becoming a Catholic, the former speaker of the U.S. House of Representatives has joined the religion of his third wife. It's just a little bit complicated, now that Newt belongs to a church that does not recognize divorce. During his religious instruction, Gingrich was undoubtedly confronted with the necessity of regarding his first two marriages as retroactively nonexistent, as sacramentally invalid. The Catholic Church normally recognizes Christian marriages as binding, which could be a problem if Newt participated in church weddings. The details can be complicated. It would be much easier if Newt married his first and second wives in civil ceremonies, but I don't know if that was the case. If it wasn't, then the Church authorities had to determine that the first two marriages didn't count. Fortunately (by the grace of God and all that), they have ways and dispensations to deal with difficulties of this nature. 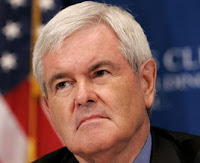 Presumably Newt's current marriage to the former Callista Bisek (who was also his mistress during his second marriage) has been regularized in some fashion. The sacrament of penance can come in very handy in such circumstances and I expect that the happy couple are now properly shriven and bathed in the light of forgiveness. One recalls that Jesus responded to the criticism of his keeping company with sinners by recounting the parable of the lost sheep and the shepherd's joy at bringing it back into the fold. It's a story with a happy ending, although Jesus neglected to comment on what the shepherd would have done if he had instead found a wolf in sheep's clothing. Gingrich is part of the flock now, but the pope might want to keep a wary eye on him. (I'm certain that Callista should.)

One hears that Gingrich is exploring the possibility of a presidential run in 2012. He may as well give it a try. He can run on a platform espousing traditional family values. Sure, it would take a miracle for him to win, but a sprinkling of holy water from Rome has already transformed him into a member in good standing of an anti-divorce religion. He's had one miracle, so why not two?
Posted by Zeno at 7:30 PM

So, the Catholic Church is immune to slime? I infer that, since Gingrich emits more slime that all the snails and slugs in my backyard combined. The man probably chews holes in his neighbors' vegetable plants as a hobby.

To be fair the RCC's position on this issue has softened allot and a majority of priests think the churches stance incorrect from a moral and scriptural standpoint.

That being said a failed marriage need not indicate a moral failing or for that matter a lack of 'pro family' ideals. It is not an either or proposition.

"a failed marriage need not indicate a moral failing"

Agreed. I think Newt's moral failings stem more from the fact that he's a scumbag. What the Pearson correlation between his scumbaggedness and his success in marriage is, I don't know. I'd have to see the data, run the stats.

To be fair, the RCC's position on Galileo and geo- vs. heliocentrism has softened, too. Too bad they seem content to continue to hand-wave things on Newt's behalf, whereas they wouldn't on behalf of the young girl that was raped (by her father, no less) in Brazil, nor the doctors that worked to help her.

It's part of his master plot. As he remarked last year at the high-profile (he did it personally) baptism of an Italian ex-Muslim, it proves that faith can bring us together.

If we all become RC, then we'll all get along.