I can see clearly now 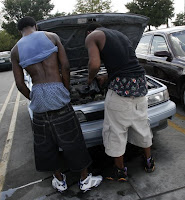 My students' weird outfits seldom surprise me very much. Young people adopt and abandon various fads with cheerful nonchalance. The bare-midriff craze seems to have run its course. Either the girls got tired of the draftiness or no longer feel obligated to display tattoos on the small of their backs. And the boys have grown weary of pulling their jeans down and exposing their boxers.

Well, most of them have. A few latent exhibitionists continue to sublimate their urges by allowing their trousers to sag around their thighs. I had one in a recent math class. He liked to sit in the back of the room, which was just as well, except for the occasion when it turned out to be an awkward choice.

Usually, when I have papers to return, I call out the students' names and hand them back one by one. It would be a little easier and faster to just toss them on the side table and have the students pick them up for themselves, but I prefer to invest the couple of minutes it takes to return the papers individually, reinforcing my recollection of their names (occasionally a challenge in a forty-student class) and adding a bit of a personal touch. Anyway, my students often need the time to settle down for class, since it apparently takes an incredible number of keystrokes to turn off their cell phones before those devices shut down. (Some of my students even need to keep pulling them back out of their pockets to fiddle with them further. How inconvenient for them!)

On the day in question, “Carl” was taking his ease in the back row when I called his name. He sauntered down the center aisle up to my lectern to take the graded quiz I was holding out for him. One of the girls suddenly shrieked.

Carl spun around to look at her, making clear to me the reason for his classmate's outburst. His boxers were torn in the back from waistband down to as far as the eye could see (which was pretty far) before they finally ducked inside his pants. There was serious cleavage. Carl stood stock-still for several seconds, trying to process what was going on. Finally a classmate removed all confusion.

Carl spasmodically snatched at his jeans and jerked them up to his waist. The full moon vanished from sight. He hobbled back to his desk with his self-induced wedgie and plopped into his seat. The class calmed down and we got to work on some actual math, although it was several minutes before the glances toward Carl and the intermittent giggles died out completely.

For the rest of the semester, for some reason, Carl decided that low-hanging pants were so over.
Posted by Zeno at 9:00 PM

I'm so glad that pulling the jeans down was never a fad here. It is seen as an exotic fashion, like an oddity, that can only be seen in faraway places like the USA. Can't say the same about the tattoos, though. Those came to stay.

I don't get it, no. But I never got my own peers, either.

I'm baffled by the 'guido' fashion as well - spiky hair and vast amounts of 'bronzer'.

The continuing saga of the Oompa Prompas fascinate me in the same way as road accidents. I'm sickened, but I can't look away:

Sili:
that is a great photo. I even felt embarrassed (and I had to look up what's a DB)

It amazes me that that such disruptions (cell phones, ghetto wanna dress codes) are allowed by teachers and school administrators.

What is it that prevents you from simply insisting that all cell phones are out of sight and off before class begins, and sending each and every violator down to the principle's office?

This is exactly what would have happened when I was in high school.

"What is it that prevents you from simply insisting that all cell phones are out of sight and off before class begins, and sending each and every violator down to the principle's office?"

My guess is what prevents Zeno from doing this is that he doesn't teach at a primary, elementary, or secondary level. He teaches at a post-secondary level, which you can determine by quick perusal of "About Me" section to the right of the post in question. Generally, at the post-secondary level, there is no "principal's" (not "principle's") office.

In the case of some violation of school policy, then the individual in question can be brought up before a review board or similar. It may be that Zeno's particular institution has no official policy on cell phones, for example, and leave it up to each individual instructor to request and enforce policy as they see fit in their classroom.

Desert Son is exactly right. I teach at a college and we don't have a principal. We also don't have a dress code. Our students are adults and are expected to behave as such, although some are immature and have some difficulty with this concept. They can wear what they like, provided they don't violate the public decency laws, which "Carl" was inadvertently breaking, to his embarrassment.

As for "allowing" cell phones: I don't allow them. Wasn't that clear? Students are expected to shut them down at the start of class. Of course, there are always a few who try to squeeze out a few more lines of text messaging before I glower at them and remind them to put them away. Usually the process of handing out papers at the beginning of the period provides a useful transition from out-of-class mode to in-class mode. It works pretty well.

I for one am hoping that low-rise pants for women don't disappear entirely; I spent the entire 1980s (high-waists, wide waistbands) trying to untangle my belt from my bra, and low-rise pants come very nearly up to my waist anyway. This is what happens when you have a short back and your ribs sit on your hips.

@Interrobang: as another short-waisted woman, I can relate. Fortunately, as a nurse, I spent most of the 80's in scrubs.

Zeno: One of my instructors had a unique way of handling intrusive cell phones (calls or texts). The offender got 1 warning, as he was aware that accidents do happen when you think you put the phone on vibrate. After that, if the phone made any noise, he would walk over and either answer a call or reply to the text. Only had to happen to 1 person for the rest to really get the message...

Zeno, do you insist that phones be off or merely on vibrate? I've taken many classes where phones were set on vibrate, so that students could respond to calls from panicky baby-sitters, aged parents who would be fearful if they couldn't reach the student, bosses who needed to find the paperwork for X immediately, etc.

No, these aren't issues the "standard age" student usually needs to face, but community colleges and commuter universities have non-traditional students. Sometimes a student has a good reason for ducking out of class, phone vibrating in hand. I had a few occasions where I had to do that myself. My instructors only asked that one not distrupt class.

But as regards your student and his wardrobe malfunction, I could only wish it would happen to a few more young men, who would then be so over their silly thigh-high pants.

I usually want them off, Karen. However, sometimes students tell me about babysitters, etc., because many of my students have children, and I always countenance leaving cell phones on in vibrate mode in those cases. However, I've noticed that students often try to keep their phones in a mode that emits a low buzz instead of just vibrating. I can hear it! I glower at those people because it's distracting. Sometimes it confuses them because I can hear their phones when they can't. They have iPod deafness or something.