How stupid are conservatives? 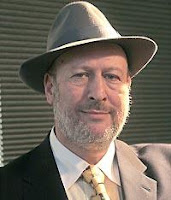 Conservative acquaintances sometimes accuse me of not listening to both sides of the political arguments of the day. I've heard this from my parents and from the token Republicans who are permitted to sit in on my Friday lunch group (which is mostly a bastion of hardcore moderates and liberals). The reality is rather different. I actually listen to much more right-wing talk radio than is good for my digestion. It's like a bad habit, but one likes to know what the opposition is up to (or down to).

Rabbi Daniel Lapin is the Sunday afternoon talk-show host on KSFO who puts the Jew in Judeo-Christian. Given KSFO's target demographic, most of Lapin's listeners are probably right-wing Christians who know he is doomed to burn in hell for failing to embrace humanity's Lord and Savior, but he's conservative enough to be tolerated in this life. Of course, Lapin isn't the only Jew who has turned to the dark side of America's political force. One of his fellow travelers called in during last Sunday's gabfest.

Lapin greeted Hannah cheerfully and she wished him a happy Passover. Then she added her two cents' worth to the theme of the day: differences between liberals and conservatives.

Hannah: As far as your topic, well, it might sound simplistic to you, and you're probably going to say that I have a one-track mind, but I blame everything on the liberals. I really do. I think if Sigmund Freud lived today, he would be a liberal.

Lapin: You're right about that. No question. He was and is and always will be a liberal.

Hannah: Yeah. And the problem is that this whole science of—if you can call it a science—of psychiatry, I think is lot to blame for this because instead of just punishing somebody who goes and killing people, they look for reasons. I mean, I'm not interested in the reason. I mean, maybe the guy is miserable, but that's no reason to kill somebody.

Lapin: That's right. And that's how I started this segment, this discussion. Stop inquiring as to why the Binghamton murderer did it. It's irrelevant.

Who cares what the reasons are for mass murder? It's possible that such knowledge might enable us to reduce the number of occurrences of these violent crimes, but seeking answers is so ..., well, gay, right? Only sissies and liberals (but I repeat myself, of course) want to understand things. Conservatives are willing to wallow in ignorance as long as they get a chance to serve on the firing squad, pull the lanyard on the guillotine, take a swing with the axe, release the trap door on the gallows, or flip the switch on the electric chair. Somewhere along the line they heard that ignorance is bliss and decided to maximize their happiness.

Say, who owns the rights to the name of the Know Nothing Party? I know some people who could make good use of it.
Posted by Zeno at 7:30 PM

I think I haven't yet dropped my standard comment on "Judeo-Christian" on this blog yet, so here goes. In current political discourse, "Judeo-Christian" means: "Ignore the fact that we treated you like sh*t for 17 centuries or so; we'll now let you be honorary Christians when it's politically convenient".

Aside from the rather reprehensible self-admission of blaming absolutely everything on another group of people (whether it makes any sense or not), I'm still confused how that led to Freud being mentioned. Was this a completely random segue, or had he been mentioned earlier in the program? I mean, I have an awful lot of disrespect for Freud myself, but what the hell? Psychiatry isn't even the name of the scientific field... it's like saying "Man, I hate Einstein. What did those engineers ever do to help us?" or "That Francis Crick was a bad man. Medical doctors should stop trying to do experiments to figure out how cells work." Not understanding the difference between a scientific discipline and a practical specialty is just the start of the ignorance...

Pure awesome, and a perfect description of creationists as well.

At least until next Sunday, you can hear the whole exchange via KSFO's seven-day archive. Lapin's program is from 1:00 to 4:00 Pacific time on Sundays and his conversation with Hannah occurred at approximately 3:40. After next Sunday, the archive will be updated with that day's program and the April 5 installment will no longer be available. [Link]

This of course is what they mean when they use that favorite phrase of theirs, "individual responsibility": forget understanding, bring the punishment.

...which is mostly a bastion of hardcore moderates and liberals...

There are hardcore moderates? What do they chant at their protests?

"Give me liberty or give me a reasonable alternative!"

"What do we want? Justice! When do we want it? In six months or so at the latest!"

Our "hardcore moderates" are pretty much what you would expect. They take joy in casting aspersions on activists from both wings. Just hunker down and all will be well. Eventually. (The Whig Party isn't as dead as one might think.)

I, for one, am amused that a rabbi would be named after an unclean animal. I guess he's from the school of the rebbe P. Orkchop.

That's what a too-religious mindset will do for you -- there is no why, there is only the will of G-d. Me, I'm a heathen atheist, so I'd like to know why he thinks that way.

Sili -- I'm willing to bet that "Lapin" is a corruption of Lepine, which is a different sort of living thing altogether.

Lapin is a Russian name; the root is 'foot, paw'.

What good are they supposed to be?