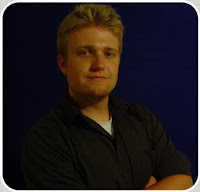 Win some, lose some

“It really puzzled me at first, but then I figured out it was a proofreading error.”

“You're kidding! Is this like the infamous ‘butterfly ballot’ in Florida in 2000?”

“Oh, it's much, much worse. The candidate in question vanished! And so did his election hopes.”

I thought “Steve” had reported to me all there was to say about the student council election at American River College in Sacramento. My friend (and former student) had served as a poll worker during last week's balloting and thus enjoyed a front-row seat during the battle between the right-wing Christian incumbents and the “Change” coalition that challenged them.

The Change slate won a sweeping victory, taking six out of seven positions for student association officers and eight out of ten positions for at-large representatives. On Friday, when Steve sent me the link to ARC Students for Change, I noticed that Change candidate Cody Lathe was the only candidate for a leadership office who lost his race to the right-wing candidate (the so-called “ARC Students 4 Liberty”). Poor sucker. All his friends win, but he's left out in the cold. How did he lose when he was part of a very successful slate?

There's the rub! Are you really part of a slate if you're missing from the slate card? Steve gave me a scan of a flier that was widely distributed on campus last week. It's the Slate change card. Check it out: 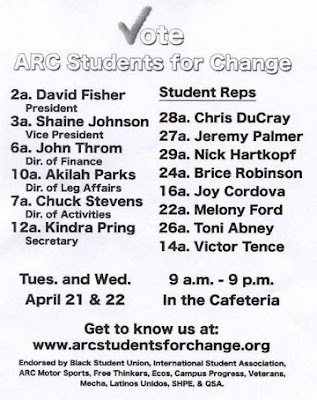 Yep. Cody is missing. Someone forgot to list the Change candidate for director of public relations. That opened the door for the victory of Slavik Gurmeza, the extremely lonely sole member of the “Liberty” gang now represented among the officers of the ARC student association.

Now I'm just guessing here, but I expect that the other student association officers will give a very close reading to any press releases that Slavik prepares on behalf of the ARC student government.

Proofreading. It's a good thing.
Posted by Zeno at 5:30 PM

This kind of thing is why people like me, who make a not-inconsiderable portion of our income from proofreading (it isn't my main gig, but it's a healthy sideline) get so annoyed with people who consider that proofreading isn't real work. (In this case, "not real work" generally means that our clients don't quite realise that a good proofreading job takes time, and so demand ridiculous turnaround times -- as if we're supposed to drop everything because their job is so important, which gets even funnier in light of the second complaint, which is that our clients seem to resent the hell out of paying anything like a decent wage for proofreading services. The proofreaders I know are lucky to get $5/page, and clients frequently beg for "discounts.")

What's a Director of Leg Affairs? Someone who checks the pilosity level of the students's lower limbs?

I'm sure next time the students from ARC will follow Interrobang's advice and proofread everything. It's a nice result, nonetheless.

HI! This is cody lathe. i wasnt on the ballot beacuse i was unable to run for an office for this semester but i am planning to seek an appoinment to a position in the fall semester. I was still hard at work on the elections through the whole thing and so becuase of that and the rest of our volunteers the election had no issues in itself. And im still gonna be closely tied to them the whole time. Keep an eye out for me guys.
-cody lathe

The meetings will be lots of fun...

I like Steven's proofreading hypothesis better, but speculation must always give way to reality. Thanks for the inside scoop, Cody, and good luck as part of your college's new ruling class.