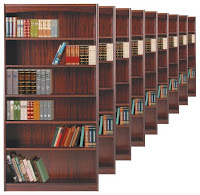 A forest by any other name

A comment by a student started me looking for my copy of What is Mathematics? by Courant and Robbins (mostly by Robbins). I've owned a hard copy of the book for decades and I used to be able to retrieve it almost instantly from its customary niche in the bookcase in the library (actually, the spare bedroom, but there's no bed in it). While I was hunting, it occurred to me that my ability to retrieve volumes from my library had become severely impaired by both a proliferation of locations where a book could hide and a deterioration in my filing system. My book collection had fallen prey to the gradual increase of organizational entropy.

Courant & Robbins was not on any of the shelves of the seven bookcases in the library. Yes, seven. (You see why there's no room for a bed in the spare bedroom?) Five of the bookcases are tall things that stand seven feet tall. Two are low bookcases, though one of those (the one under the window) is a double-wide.

I continued my search in the computer room (okay, the other spare bedroom; no bed in there, either). Five bookcases, all tall, none containing Courant & Robbins. I do a lot of my work in the computer room, so the shelves groan with a bizarre and eclectic collection of whatever was needed for a particular job at any given time. And a stash of old, old paperbacks that used to live in Mom & Dad's basement, many of them dating back over forty years when I was in high school. (Maybe I should box them up and put them away.)

I'm not counting as bookcases the shelves in the computer room closet or the shelves mounted on the wall above the computer desk. Those are full of old manuals and a miscellany of computer parts. (It's possible I could assemble an Intel computer out of the scraps.)

I looked at the three bookcases in the hallway (two tall, one short; the short one is under the whiteboard where I scrawl reminders to myself, some of which I can no longer decode). Lots of books from grad school. No Courant & Robbins. Frankly, I knew it wouldn't be there. The hallway is the newest location for bookcases and my latest acquisitions are on those shelves.

How about the bedroom? I don't remember having dipped into What is Mathematics? recently, but if I had perused it any night during the last decade, perhaps it had migrated to the bookcase next to the bed. Or the matching bookcase on the opposite wall. Only two tall bookcases in the bedroom. (The bed gets in the way. It really does.) And I looked into the alcove where a short bookcase was built in. Nope.

Seventeen bookcases checked so far and no Courant & Robbins. To the living room!

The living room has seven bookcases. Of course, I'm giving the living room credit for the two small bookcases in the entry way. One is a tiny thing I acquired from my parents. It has only two shelves and family folklore asserts that it was once the home of my father's complete set of The Book of Knowledge (the bookcase tossed in as a premium during a special sale in the 1940s). The five other bookcases are tall, though the lawyer's cabinet with glass doors isn't quite as tall as the others.

There are no bookcases in the bathroom. That's a mercy. But there is one in the utility room. It's a low and simple affair made of unfinished particle board and its job is to hold dozens of back issues of old science fiction magazines. It does the job just fine. No books of any other description are on its shelves. Certainly no Courant & Robbins.

How about the dining room? It has five tall bookcases along one wall. Very impressive. They contain math books (lots of calculus here), religion (not, for some reason, filed under fantasy), politics, and history. Courant & Robbins is nowhere to be found.

Damn. Thirty bookcases and no trace of What is Mathematics? Could it be in one of the bookcases in my office at school? In one of the boxes in the storage shed next to the house? In one of the three shelf units in the garage? Darn! I had been so certain I knew where it was! I trudged back to the computer room to send an e-mail confessing my failure to retrieve the book I had recommended to my student.

As I passed the library, an irresistible force sucked me into the room. (This often happens.) Right there, sitting next to Royden's Real Analysis, was Courant & Robbins. What was a popular expository book doing on the shelf with my thirty-five year old graduate textbooks in mathematics? I had looked right past it during my first search of the room.

I swear. This summer, I'm sorting the books and imposing some order on my thirty bookcases.

Only thirty? Perhaps I should count again.
Posted by Zeno at 10:00 AM

This sounds distressingly like my father's house. I don't think we have any walls in the house that aren't blocked by either furniture or bookshelves.

And when he first moved in, there was a rough categorization of books; no such luck anymore--finding any particular volume in the house has become a tall order.

...Funnily enough, he's a teacher too. Albeit, one of computer science.

Just for fun, I should measure the linear feet of bookshelf in my house sometime.....

Bibliophilia: it's a terrible affliction ;-).

If I can afford it.

Pity I don't read all that much anymore.

I wish I had enough bookshelves for the stacks of books on the floor and tables...

I'm a compulsive sorter, just imagining putting that number of books in order makes me a-quiver.

Every time we move I swear I'm going to use Delicious Monster to organize our books. I do not have quite your same collection, though, so maybe I ought to quit lamenting the sheer numbers of books and just hop to it...

Boy, and here I thought I had a lot of bookcases. I only have one big one, two medium-sized ones, and a small one, plus three wine crates tipped on their sides and a set of two wall shelves. I am definitely running out of space, though, and I could seriously use a catalogue database.

Well, I don't have 30 book cases but I can certainly relate! I have 13, in various parts of the house, and others places books just happen to lay around...

I do throw away books, or sell them though. I'm a HUGE re-reader of books, so in my world, if I haven't happened to open the book in 2-3 years, out it goes. I still have too many books (at least according to my husband). I have given the gene to my children so eventually we book lovers will take over the world!

Name, number, or letter the shelves; then take clear pictures of the books on the shelves, one shelf or half-shelf at a time. Then sit down at your trusty computer and enter them into a spreadsheet (title, author, format?). When you want a book, look it up on the spreadsheet and go get it.

Refinement: add the date when you last saw it so you know if it's likely to have been moved.

I'm still working on implementing mine, where the shelves are named, e.g. bedroom shelf, hall shelf, cookbook shelf, but even partial listing helps.

Or you could enter them into LibraryThing and define tags or comments that would tell you the location.