Who would Jesus elect?

The Sacramento Bee reports that student body elections are being held this week at American River College, the biggest community college in northern California. During the past year, ARC's student government has been notorious for endorsing the anti-gay Proposition 8 and opposing the national Day of Silence. That's what happens when student apathy allows a small but vigorous group of anti-gay bigots and religious extremists to take over the student association.

It's easy to characterize the ARC student politicians as comical—especially when a member of their coalition takes the trouble to write his college newspaper to denounce nudity in art as pornographic—but the unfortunate truth is that they're dead serious. And one of their targets is science. They really hate it. Their leader, Yuriy Popko, who is the Christian cabal's candidate for student body president, told the Bee that he opposes “any kind of political, religious or anti-religious indoctrination in the classroom.” That's the way Popko spins it. One of his running mates provides more specifics: 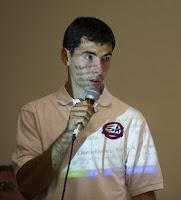 Christian students feel like they can't speak their mind in class, said Viktor Choban, a student council member who is running for re-election as part of Popko's slate. He said he is tired of professors' support for feminism and science teachers whose tests ask how old the Earth is.

“It depends on your religion,” said Choban, 25. “I would say 6,000 years based on my religion. The evolutionists would say 2 million years.”

No, Viktor, the age of the earth does not depend on your religion, although your religion may prevent you from accepting any evidence more current than Archbishop Ussher's extremely literal arithmetic exercise on the Bible.

But perhaps it doesn't matter. Viktor gets to flunk no matter what he says. He won't get any more credit for an answer of 2 million years than he would for 6000. Viktor's paid so little attention in his science classes that he doesn't know the actual answer is 4.5 billion years. Way to close your mind!

The election results will be posted later this week. Shall we all pray that the religious extremists running the ARC student government suddenly find themselves with a lot more time to spend on their religious devotions?
Posted by Zeno at 10:30 PM

Yes for Yuriy Popko, and No to homosexual marriages!!!

I don't understand why should anyone spend a large amount of money to get into a University to study science, and then say stupid things like that. I really don't.

California's community colleges are not expensive places to get an education, but people like Yuriy and Viktor seem determined to waste what they do spend. They're afraid to learn anything that disturbs their cozy little preconceptions. Kind of defeats the purpose of an education. If they keep talking, I hope it defeats them, too.

Exactly, what the purpose of attending if you're not willing to learn?
Yesterday I was reading some of your older posts and I laughed on the polite student "affair" but this is something totally different (and worse, if that's possible).

Yes to anonymous cowards, and No to having the spine to put your name on your beliefs!!!

Oh, and Zeno: don't you know that the purpose of an education is to get a diploma? A voracious reader like you must have heard of plot coupons, right?

My advising professor teaches a class on Prehistoric Life to upper-division non-science majors. He is meticulous about pointing out to students that they don't have to believe what he's teaching them, they just have to learn it. He gets many creationist students, but few try to argue with him when he approaches them with that attitude.

(If you're wondering why creationists would take what is essentially a class on evolution in the first place, sometimes the motivation is simply that the class fulfills some graduation requirement and fits into their schedules.)

João said...
Exactly, what the purpose of attending if you're not willing to learn?

Sadly, in my short experience of college education so far, I have found that very few people come with intent to learn, and some even actively hate the learning. They sit in classes as dictation robots, wondering for every word the lecturer says if it will be in the final exam or not. Obviously, this does not work out too well for them, especially in subjects like Calculus...
This has nothing to do with religion by the way, at least in my case. They just simply do not find the subjects interesting, only necessary for getting a passing grade. I'd hate to guess if this is due to reduced curiosity, upbringing, or truly finding the subjects too difficult and thus uninteresting. Or some other cause.
Of course, among themselves, they freely mock the boringness of the subjects. A statement from me of finding "Stirling's approximation" to be cool induces giggles...

As a result, the students who are most active in campus politics may not be very representative of the students who attend. If they can motivate a bloc of like minded students to support them, the light student voter turnouts work to their advantage.

It's been ... er, 36 years since I was in college. Is this student group really important? I mean, if you happen to be there to get an education, do they actually wield influence that would affect that?

Or are they just tarnishing the school's name by supporting wackaloon ideas?

ods15 and MTran,
Thank you for your explanation. I really didn't know what a Community College is but now I think I understand it better.
Ever since I graduated from University I've been involved in teaching and my last experience was in a Catholic University in Spain. It lasted for three years but in the end (September 2008) I just had to leave because I couldn't take it anymore, mainly due to bad administration, excess workload and low wages. If I told you how much I was getting each month, you wouldn't believe it.
The point is: in a catholic country like Spain, in a Catholic University, I never had the slightest pressure (or even a hint) as to what I should teach in class. Religion was never a topic and I don't recall a single conversation about it, even with my colleagues.
Nowadays I just find it funny that some of my former students want to be friends with me on Facebook. I guess I wasn't as mean as I thought I was.

Just wanted to note, in my case, it is not community college (at least I don't think it is, I'm not sure what is the Israeli equivalent)
It is Tel Aviv university, probably the highest addmission standards university in Israel (which is not necessarily because it is the best university, just one with little spots due to low funding).

“If you accept the literal truth of every word of the Bible, then the Earth must be flat. The same is true for the Qu'ran. Pronouncing the Earth round then means you're an atheist. In 1993, the supreme religious authority of Saudi Arabia, Sheik Abdel-Aziz Ibn Baaz, issued an edict, or fatwa, declaring that the world is flat. Anyone of the round persuasion does not believe in God and should be punished.”
- Carl Sagan, "The Demon-Haunted World," p. 325

Not to be picky back at you, Jonathan, but 4.54 billion years is given by some references for the age of the earth. I think we're in the ballpark.

Not to be picky, but it's a contraction