In the 1970s, when I was in a graduate program in mathematics, I frequently stopped at a 24-hour restaurant near the university for a bite on my way home in the afternoon or evening. I usually sat at the counter, where the service was quick, and read a book while munching a sandwich.

Those were the days when smokers felt entitled to light up and fumigate any venue they occupied, so it was by no means unusual to find myself sharing the smog bank generated by the fellow on the next stool. I've hated cigarette smoke all my life, but enduring second-hand smoke was a commonplace of everyday existence back then. The only surprising departure from standard practice would occur when your neighbor at the counter would turn toward you and ask, “Do you mind if I smoke?” This was an exceedingly rare courtesy.

My grateful response would be, “Oh, thanks for asking. I would really appreciate it if you didn't.” More than once, however, I discovered that I was not being asked for my permission at all. No, I was being notified. The smoker would smirk, brandish a lighter to ignite the cigarette already in his mouth, and favor me with the first cloud of smoke.

Perhaps smokers were more polite where you grew up, but it was exceedingly rare in my experience to meet a smoker who was willing to refrain from his god-given right to pollute the local environment. As you can imagine, I therefore never took seriously the plaintive cries of smokers who wanted to know why we needed smoking bans when human kindness and courtesy would suffice. Yeah, right. Tell me another one.

Sometimes I drop in for lunch at the restaurant that I used to frequent thirty years ago. It's gone through three new names and a couple of major remodelings over the decades. The counter is long gone, replaced by small booths. It is also, of course, a nonsmoking establishment.

All restaurants are nonsmoking in California. So are bars, for that matter. That one stuns me when I think about it. Bars are nonsmoking? I would never have predicted that. Although the Golden State is rather in the vanguard of the antismoking movement, the ban on smoking in drinking establishments came as a shock. It doesn't much affect me, since I'm a nondrinker and seldom have occasion to be in bars, but it's still difficult for me to imagine clean air in drinking establishments. 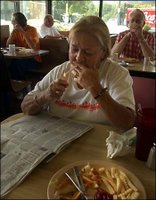 As a fairly provincial fellow who doesn't travel much, I'm usually at rather loose ends on those occasions when I'm away from my usual haunts. In 1998, on a trip to Colorado for a friend's wedding, I was momentarily discombobulated when the hostess at a restaurant asked my party whether we wanted smoking or nonsmoking? I had not been asked that question in many years, although we in California had gone through a lengthy “separate sections” period before making the restaurant ban total. Today it no longer even occurs to me to think I might have to sit in or near someone else's smoke cloud. Smokers have dwindled in numbers and we have them on the run—out into the alleys where they furtively congregate to catch a few puffs before going back inside among the less addicted people.

This morning's newspaper prompted my reminiscence about the bad old days. The journal had picked up an Associated Press story about restaurants in Georgia that were trying to work around the ban on smoking in eating establishments. In Georgia. Think about that, folks. Southern states—tobacco states—are enacting smoking bans. Gosh and damn. The revolution arrived without anyone quite realizing it.

AP reporter Russ Bynum filed his report with a dateline of Dublin, Georgia:

A year after Georgia forced restaurants to extinguish their smoking sections, the sign outside Chuck and Kay Fordham's diner defiantly invites customers to “Bring Your Butts On In.”

Inside, ceiling fans stir the smell of frying bacon and hash browns and clouds of blue cigarette smoke as patrons puff away over cups of coffee. Butts pile up in the ashtrays on the tables and lunch counter.

Folks who don't want a side order of secondhand smoke with their eggs and burgers should probably stay away from the Smoker's Cafe.

The Fordhams found a way around the smoking ban by exploiting a loophole that was created to exempt bars from the law. Instead of banning cigarettes, the couple banned children from their restaurant.

“The biggest thing with me was the government telling you that you can't do this,” Chuck Fordham said. “Most smokers, after they eat, want a cigarette. And to get up from the table to smoke, it's just a pain.”

I love that line about “the government.” Whether you like it or not, Mr. Fordham, when you live in a representative democracy, you are the government. We all are. Smoking bans, with loopholes or otherwise, would never be enacted without sufficient support from the public. The smoking ban in Georgia represents a sea change in the status of tobacco, which even in the deep South is no longer sacred. There are cities in Alabama that ban smoking in bars (although the state as a whole has yet to follow suit).

The antismoking trend is here to stay, so we can breathe a little easier.
Posted by Zeno at 8:00 PM

Actually I approve of the Fordhams' approach. It means that they can cater to smokers, or to everyone else, but not really both. I have no problem with smokers' bars as a niche industry; it's when you can't get away from it that it starts to suck.

I don't have any particular problem with what the Fordhams are doing, although I feel sorry for them, slaves to nicotine. Smokers are welcome to their habit, as long as it doesn't intrude on those who don't share their vice. One potential problem, though, is if the Fordhams have employees who are required as a condition of employment to be smokers. Then it ceases to be an issue of freedom of association and becomes a matter of workplace environment. As smoke-free workplaces become the norm, it pretty much ensures that only Mom & Pop operations like the Fordhams' Smoker's Cafe can slip through the adults-only exception in laws like the one in Georgia. The cicle will continue to contract, although I doubt that smoking will ever be completely snuffed out.

Have you ever watched the Japanese series "Planetes"? It's set in space, mostly at a space station but partly on the moon, in 2075. One of the main characters is a smoker, and there are some episodes where her search for a place to smoke is of great importance - they are few and far between; on the station itself she has to get into a small, personal-sized chamber...