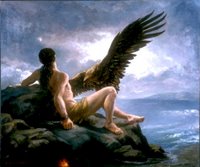 Bringer of fire, not light

The novels of Jasper Fforde are ridiculously entertaining. He writes in a fantasy genre that treats fictional characters as denizens of a parallel universe. It can be awkward when they get feisty, such as Ophelia launching a hostile takeover of Hamlet because she's sick of the title character's dithering—and besides, her part is too small.

Fforde is best known for his Thursday Next series of novels, four books in which Thursday gets herself in trouble in such venues as Jane Eyre, gets trained by Miss Havisham of Great Expectations as an agent in Jurisfiction, and hides out in an unpublished novel so that she can bring her pregnancy to term in peace. This was not a genre with which I was previously familiar, although I suppose Tom Holt has been mining a similar vein for a longer time (e.g., Snow White and the Seven Samurai). Fforde, however, holds my attention better.

The Thursday Next series appears to be complete now, or at least on hold, while Fforde branches off into his new Nursery Crime project. The first installment, The Big Over Easy, is a murder-mystery/detective thriller concerning the apparent murder of Humperdinck Jehoshaphat Aloysius Stuyvesant van Dumpty, a.k.a. Humpty Dumpty. Of course, given Mr. Dumpty's notorious problem with alcohol and his penchant for sitting on walls, it's difficult to be sure that foul play was involved in his fall.

Characters from classical mythology are as likely to stroll through the pages of Fforde's novel as any nursery rhyme character, so we get to meet Prometheus, a Titan who is seeking asylum in the United Kingdom while fighting extradition to Mount Olympus, where he is wanted for a prison escape. Prometheus finds lodging in the home of Jack Spratt, Detective Inspector with the Nursery Crimes Division, and eventually has a pleasant chat with Spratt's grown daughter, who is named Pandora:

Prometheus and Pandora continued talking as the fire gradually burned itself down. Prometheus pointed out the flaws in evolutionary theory, such as how a bird could possibly have evolved wings without having useless appendages for thousands of years that would have hindered its survival. Pandora countered by saying that rule number one of the cosmos was that unlikely things do happen. Indeed, given the time scale involved and the size of the universe, unlikely things, paradoxically enough, became quite commonplace.

Nice! I don't know Fforde's own convictions on the matter, but he provides us with a neat juxtaposition of a specious criticism of evolution and a significantly flawed counter-argument.

These days it's just embarrassing when yet another creationist demands to know the utility of “half an eye” or “half a wing.” The answer is the same one that lays waste to claims of “irreducible complexity”: preadaptation and co-option. Intelligent design creationists love to argue that the bacterial flagellum is so finely tuned a mechanism that it cannot be reduced in any way without destroying its functionality; therefore it could not possibly have evolved from any simpler predecessor. Unfortunately for the creationists, it has now been shown that the flagellum has likely precursors in certain protein secretory systems. The secretory systems were not propulsion systems, but evolution is pragmatic and opportunistic. The secretory systems were co-opted for a function other than their original. (See Ken Miller for more details of the argument.)

By contrast, Pandora's counter-argument has a nugget of truth at its core: a lot can happen in deep time. Nevertheless, she is depending entirely too much on the probability of random occurrences. So the proto-birds will have trouble managing their clumsy half-wings for millions of years until they manage to get airborne? Yes, it's very unlikely, but if you wait long enough...

No, no, no. The point is that any “half-wings” will have a useful function of their own. It won't be flying, because they aren't “designed” for flying. Of course, we weren't there as observers (as creationists love to point out), so we are limited to working with the limited evidence that survives in the fossil record and the DNA of today's living species. By slow patient degrees (there is something to that argument about time), the story is coming together. It is making perfectly fine progress without the intervention of any divine beings, whether creator spirits or fire-bringers.

Speaking of fire-bringers, let's give the last word to Detective Inspector Jack Spratt, who muses on the conversation going on between his daughter and the exiled Titan:

“Science meets mythology. It'll be interesting to see what conclusions they draw before the night is out. I'll be fascinated to hear what Prometheus has to say about the fossil record.”

Mamacita (The REAL one) said...

I ADORE Jasper Fforde! How lovely to discover someone else who appreciates the snarky wonderment of his convoluted plots and interwoven characters!

Thursday, Landen and Friday (as well as, one assumes, further Nexts/Parke-Laines) return next summer. (I do not know if all their children will use the name Next, but at least two do.)

The second nursery crime book is much poorer than the first.

I was going to tell you that Fforde's giving us another Thursday Next novel next year, but I see you've been told.

I don't like the Nursery Crimes as much as Thursday's world, but they are enjoyable reads.