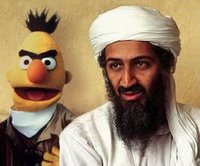 That's what friends are for

Now that September is here, planning for the pre-election “October surprise” must be in high gear. Mere weeks are left for the White House to engineer some suitable domestic or foreign crisis that triggers the electorate's deeply ingrained reflex to rally round the flag in times of trouble.

One could reasonably point out that the Bush administration has been nothing but a series of genuine disasters interspersed with the occasional ginned-up emergency (usually accompanied by a Homeland Security press release about raising the threat advisory level to Code Orange or Code Red). It will be a challenge for the Bush league to come up with a crisis that looks more immediately threatening than business-as-usual by the administration's bumblers and fumblers. Some people are betting on an attack on Iran, so we can easily imagine White House aides on their hands and knees amid the political posters, carefully daubing out the “q” in “Iraq” so that they can replace it with an “n.”

Would a supposedly pinpoint strike on Iran's nuclear facilities by U.S. forces sufficiently rally the country about the president? Even the slow thinkers who surround Bush might hesitate in the face of the impossibility of anticipating the consequences. In fact, a new military adventure might backfire disastrously in the face of the president and his political party. A fed-up citizenry could very well recoil at more ill-advised adventurism by the White House saber-rattlers.

So what is a beleaguered president to do?

The best possible October surprise for George Bush and the Republican Party would be the capture of Osama bin Laden. The problem is that Bush genuinely doesn't know how to lay hands on the fugitive terrorist leader. The president missed his chance to catch him at Tora Bora and no longer knows where the al Qaeda leader is hiding (although it seems likely to be somewhere in the rugged area along the border between Afghanistan and Pakistan). Bush has even gone so far as to dismiss Osama as irrelevant, claiming not to care where he is. That's the lame excuse of someone who has no idea how to catch him.

But what if Osama decides to surrender? He could make it look good, of course, arranging for a dramatic showdown and capture instead of simply turning himself in. I'm sure the president would quickly strike a deal to make it happen in accordance with whatever script Bin Laden might suggest.

Of course, with Osama in custody, Bush would immediately change his mind about the terrorist leader's importance. He would address the nation from the Oval Office to brag about the thrilling capture and to take credit for a great victory in the global war against terror. The sycophantic press and the Republican noise machine would crank up waves of raucous applause for our glorious leader and GOP candidates would suddenly begin touting their association with the man in the White House. The Republicans might even retain control of one or both houses of Congress. Oh, it would be such a coup for the Bush league!

But why, you ask, would Bin Laden agree to such a thing? Simple. Osama is a true believer. Only the struggle matters. Religious fanatics do not reason like sensible people do. Their obsessions control them. Bin Laden knows that al Qaeda and its extremist form of Islam have prospered during Bush's tenure. He even released a video tape on the eve of the 2004 presidential election (that year's October surprise), certainly knowing that his denunciation of the president should be good for a significant Bush bounce in the polls. (That Bin Laden also dismissed Senator Kerry in the video hardly matters, since the insults of Osama on the eve of the election were of much greater benefit to the incumbent than to his challenger.)

It would be contrary to Bin Laden's wishes if the United States were to cease being an international pariah and no longer played the part of a self-righteously unilateral thug. Bush administration policies have turned Iraq into a spawning ground for suicide terrorists and alienated most of the nations of the world. A Democratic Congress would serve as a check on Bush's excesses and give the president an advanced case of the lame-duck illness. It would pave the way to more cooperative ventures with other nations who oppose terrorism.

Bush and his cronies have been the principal enablers of the terrorists' success in intimidating our society. Once Bush is crippled by the rout of the GOP in the mid-term elections, he will no longer be able to pursue his program of curtailing American freedoms and turning our nation into an autocracy. His policies are the means by which the terrorists attain their goals of destroying and terrifying this society. Clearly, therefore, continued success and power for Bush are key elements in Osama's campaign against the United States. If his unwitting agent is hobbled, Osama's war against the West suffers a great reverse. Since Bin Laden is a close observer of events in the United States, he may even now be thinking how it might be possible to rescue his single most important ally.

Many of Bin Laden's recruits have sacrificed themselves as suicide bombers, eager to give their lives in what they believe is a sacred cause. Could Osama ask less of himself? He can sacrifice his freedom to ensure the continued progress of his jihad. And it might not even be that big a sacrifice. George and Osama have many business connections through the various members of their families and a reasonable accommodation could be struck in which Bin Laden would get high-quality Western medical care while living in a comfortable and secure facility. Then, for reasons too complex to explain, he might get swapped in some kind of prisoner-exchange deal with Syria in, say, December 2007.

The idea of Osama bin Laden simply giving himself up as the October surprise is quite interesting if not very plausible. However, it still might happen not for political reasons but for medical reasons: Osama bin Laden needs dialysis treatments for his bad kidneys and his need for medical equipment and survival might be a greater motivation than politics. If the man can his message out now from a cave, then surely he'd be able to get his message out from the safe haven of a modern medical facility.