Garbage in, garbage out! 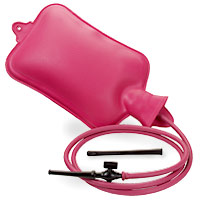 What is this shit, anyway?

You believe me, don't you, when I say that I don't watch infomercials? Honest! Of course, a question like that is the inevitable preface to a story about an infomercial I recently saw. The experience was its own punishment.

It was an idle Sunday afternoon. I had completed grading papers (my school is wrapping up spring semester) and I clicked on the television. An independent San Francisco station appeared (namely, KRON 4). It was broadcasting one of those programs that peddle bogus health regimens (for a special discount if you call now). “Christian health evangelist” Danny Vierra was participating in a mock interview with a conveniently fawning shill named Donald Barrett.

Vierra explained that he was in favor of “educating, not medicating.” (As you may have heard, medications contain chemicals, while natural healing products are apparently composed of materials other than those from the periodic table of the elements.) His main objective was to promote better living through improved bowel health. Vierra, it turns out, is obsessed with bowel movements. Perhaps he needs to rent the DVD of The Road to Wellville.

Your colon: discrete or continuous?

During the minutes that I watched the program, a question was prominently displayed on the screen: Is a clean colon the secret to health and vitality? (In case you were wondering, the answer appears to be “yes.”) Vierra babbled on about the way “acid-producing foods” are a danger to bowel health. They supposedly stimulate mucus formation. The mucus allegedly coats the lining of the colon with multiple layers, constricting the bowel passages much as atherosclerosis clogs arteries. That sounds scientific, doesn't it?

If there had been nothing more to it than that, I would have merely chuckled, changed the channel, and forgotten about it. Instead, however, Vierra launched into a discussion of bowel-movement frequency that was fascinating in its sheer stupidity, illogic, and hilarity. He darkly observed that medical doctors do not even have a real standard for the optimum frequency of bowel movements. Physicians tell their patients they're in the normal range with any rate in the range from three movements per day to three movements per week. Vierra was horrified at the ignorance and irresponsibility of traditional doctors (that is, those with actual medical training and professional qualifications) for not embracing the one true standard—the natural standard—of three per day. It has to be three per day, Vierra explained, because that's the number of meals we eat every day. Did that get your attention? It got mine. Hang on tight as the logic rollercoaster hits the corkscrew section of the track:

Vierra pointed out to his straight man the solid reasons we should be concerned. “I can eat twenty-one meals in a week, have three bowel movements in a week, and be eighteen meals short of evacuation, and the medical field is going to say you're normal. If you have two to five bowel movements a week, you're going to be fifty- to seventy-thousand bowel movements short in a lifetime.” That's right, ladies and gentlemen. Danny Vierra thinks each bowel movement is equivalent to processing the remains of a single meal. If you don't go to the bathroom often enough, the meals just stack up inside you. (I'm sure this is even trickier if you've narrowed your colon aperture by irresponsible indulgence in those acid-producing foods we mentioned earlier.)

Perhaps he would have addressed the controversial issue of between-meal snacks had I been resilient enough to listen to more of his crappy argument, but at this point my intelligence had been sufficiently insulted. I turned off the TV. I considered going to the bathroom, but my stomach gradually settled down and I decided I wasn't going to vomit in disgust after all.

Hey, do you think puking your guts out might count in lieu of one bowel movement? Boy, there are sure a lot of interesting research questions here!
Posted by Zeno at 9:21 PM

The way I eat, and as often, I'd be spending half my day in the bathroom! :o)

Oh my dear Ed. I keep forgetting Einstein about human stupidity. I should really stop being surprised by the continuously broken records on the scale of stupidity, but I can't.

A lot of people, perhaps even the majority, seem to believe that everything you eat is eventually excreted as stools. Of course, this is tantamount to believing that there's no such thing as digestion or absorption if you have at least a middle-school knowledge of GI A&P, but I don't think a whole lot of people have such knowledge.

This guy might be my new favourite moron. I think what amazes me more than the simple fact that the aforementioned "expert" on bowel movements is for lack of a better term full of crap (or not if he's going three times a day,) but that someone somewhere thought "hey, we should air this." Perhaps said someone somewhere has a really sick sense of humour.

We show these commercials on the TV station I work for. There are several other colon clensing ones going around as well. Not only are they annoying in thier illogic, but generally gross to listen to.

The other one we show is worse though. It's for a different product that does the same thing. The guy pushing it seems to have this wierd skin condition on his face that makes one want to puke even more.

Still, none of them irritate me more than Kevin Trudaue, who seems ot have dissapeared from our infomercial library.

you don't want to know what i was googling when i landed here, but you have the most marvelous writing style.