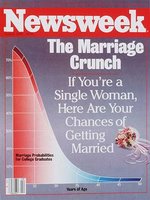 I need to teach statistics again. It just hasn't fit into my academic schedule very well in recent years (which needed to accommodate my graduate classes at a nearby university), so I've been teaching lots of algebra. I make no apologies for algebra, which is your essential passport to math, science, and engineering classes, but statistics has a special cachet all its own.

It's not just that statistics is a discipline distinct from mathematics, although its underpinnings are highly mathematical. No, the special quality of statistics lies in its immediacy. We are bombarded by numbers, from the proverbial “three out of four doctors recommend” to the polling data that flood into our daily news media. (Quick! How unpopular is Bush today?) Marketing people understand that quantitative sales pitches (“preferred 2 to 1”) carry more weight than qualitative statements (“better than the others”), and so they assault us with numbers. Numbers are powerful. People armed with statistics are better able to understand the numbers and give them appropriate weight. Statistics is math for self-defense. Get some.

I am reminded of the impact of statistics by Newsweek's 20th anniversary mea culpa. What are they apologizing for? Simply one of the most egregious statistical statements ever perpetrated on a vulnerable public:

[M]any women who seem to have it all—good looks and good jobs, advanced degrees and high salaries—will never have mates. According to the report, white, college-educated women born in the mid-'50s who are still single at 30 have only a 20 percent chance of marrying. By the age of 35 the odds drop to 5 percent. Forty-year-olds are more likely to be killed by a terrorist: they have a minuscule 2.6 percent probability of tying the knot.

That quote from the latest Newsweek is a faithful account of what the news magazine reported in Too Late for Prince Charming in its June 2, 1986, issue. The impact was cataclysmic.

That copy of Newsweek remains safely stashed in my office, two decades after it originally arrived in my mail box. I haul it out as Exhibit A whenever I need to show my statistics students the benefits they might derive from mastering the course material. While statistically competent women gave the story a well-deserved raspberry, the more innocent experienced stark panic:

“Everybody was talking about it and everybody was hysterical,” says Bonnie Maslin, a New York therapist.

Now that Newsweek has beaten its chest black and blue in penitence, shall we forgive them? That's up to you. It is, of course, the perfect opportunity to revisit old wounds and beat up on the ludicrously incompetent reporters who penned this travesty. They deserve it.

For my part, however, I'd like to take a moment to consider a simple calculation—well within the ability of any competent adult, I hope—that would have instantly exposed the spurious nature of Newsweek's claim. Look at the number: 2.6%. If you were a college-educated single woman forty years of age or older, that was supposed to be your chances of getting married. You were allegedly more likely to be blown up by terrorists. How many women were in this demographic cohort in 1986? After noodling around at bit at the website of the U.S. Census Bureau, I found a table for March 1985 data on years of school completed by various demographic categories. It's not a perfect match for our question in terms of the age groups it provides, but close enough for a back-of-the-envelope calculation.

Even allowing for that fact that we weren't supposed to include women between 35 and 39 in our sample, I think we can draw a lesson from our bit of number crunching. If you had told a college-educated single woman over the age of 40 that she would be less likely to find Mr. Right than to be one of the nearly 16,000 American women doomed to destruction by terrorists, I hope her reaction would have been incredulity: “Sixteen thousand? Are you crazy?” Maybe not crazy. Just very, very silly. And innumerate.

If you want even more information on the infamous Newsweek article and comments on its twentieth anniversary, you can check out Newsweek's own retrospective, a detailed post at Feministe, and an article by Jeff Zaslow (cited in the Feministe piece).

Let me give the last word to one of my statistics students, who looked at the original Newsweek article and quickly caught on. With mock concern in her voice, she cried out: “I'm more likely to get blown up by a terrorist?” She paused for a long pensive moment. Then she said, “Would he at least be a cute terrorist?”

Hey, another research question!
Posted by Zeno at 9:59 AM