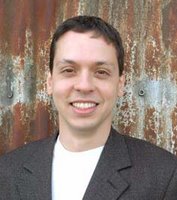 Markos Moulitsas Zúniga ended his promotional tour for Crashing the Gate in California's state capital today with a book signing at Tower Books on Broadway. I visit Markos's eponymous site, DailyKos, at least once a day. It's not easy to keep track of all of the posts and diaries on the left blogosphere's most active site. In fact, it's not really possible. You do well to skim it on a regular basis. When I checked in this afternoon, I saw the note posted by Markos about his trip to Sacramento. I immediately adjusted my schedule accordingly. (Good thing the spring semester is over and Sacramento's not too far away!)

Tower Books on Broadway in Sacramento is the flagship of the Tower world empire, now a fading shadow of what it once was. I had not been there in ages, although I used to haunt the place in its glory days. When I worked at the State Capitol in downtown Sacramento, more than twenty years ago, I loved to stop in and browse the books on my way home. Lots of the older books on my shelves are from Tower, but Tower has no bookstore where I live now and it's easier to go on-line for books and CDs and DVDs. It was a nostalgic return visit. I picked up a copy of Crashing the Gate while I was there, of course, along with copies of Eric Boehlert's Lapdogs: How the Press Rolled Over for Bush, and Ethan Rarick's California Rising: The Life and Times of Pat Brown (California's last successful progressive governor).

I don't think the locale was intended to be a metaphor for the sorry state of progressive politics today, but that thought persisted in the back of my head. A few dozen people turned out for Markos's appearance, overflowing the folding chairs that had been set up and prompting the Tower staff to set out a few more seats. Some of us got our books signed early, as Markos casually chatted with people and waited for the time to begin his presentation. He opened by remarking that the Sacramento crowd was the first (in some forty cities) to be in place on time; he was more accustomed to waiting till ten minutes after the announced time before he could begin. We weren't sure whether it was praise or not (and Markos probably didn't particularly mean it one way or the other).

He launched into his well-practiced patter concerning the plight of progressives in today's neocon-ridden political environment, castigating the poobahs of old-school Democratic campaigning for becoming complacent with their role as losers. Traditional campaign consultants manage losing candidates and then go their merry (and well-remunerated) way to advise other defeat-doomed Dems. What does it take to lose one's credibility today? It's sad. And pathetic.

Markos castigated ossified political bureaucracies such as the Democratic National Committee, too laden with careerist hacks to ever stir up the troops into winning electoral battles. Howard Dean may be shaking it up somewhat, but old habits die hard. Markos cited the example of a friend who went to work for the DNC full of optimism that Governor Dean would make things right, but lasted only six months before he felt he had to decamp.

The book Markos coauthored with Jerome Armstrong (of MyDD) is a political manifesto, highlighting the continuing failures of the old way of doing things and pointing the way to generating a vigorous political renewal by means of communications. It's not just blogs, said Markos, but also other devices like cell phones that will drive political activism in the future. In fact, it's already happening, since cell phone contacts were a key tool in generating the massive and essentially spontaneous demonstrations against the anti-immigrant legislation sponsored by the House Republicans. (Let's be clear here: “Spontaneous” means “natural”; it doesn't have to mean haphazard or disorganized.)

During the Q&A session, Markos was asked about getting young people involved. That's an area where political organizing via text messages will be a key tool. Markos mentioned that minority youth were especially partial to cell phones, demographic data showing that the largest percentages of cell phone users were among young Latinos and African Americans. I asked him which candidates were the best role models in their use of websites to promote their campaigns. Markos singled out Mark Warner and his Forward Together political action committee, whose site is the work of Jerome Armstrong. “I know Jerome, so I know that's the best one,” said Markos.

We were also treated to a small example of the time-wasting quibbling that occurs when the old politics doesn't quite understand what the new politics is trying to say. Markos expressed his concern about the special election in California's 50th Congressional District, where Francine Busby is waging a fierce campaign to succeed disgraced Republican Representative Duke Cunningham. He mentioned that off-year elections tend to draw only the hardcore political activists and that the 2006 turn-out data was bearing that out in the elections held so far this year. The results of such elections are therefore a measure of whose base is more fired up. In that sense, Markos continued, Busby's votes in the first round of voting was disappointing because she was unable to get a bigger percentage of the votes cast in the 50th Congressional District than John Kerry had achieved in last year's general election. If the Democratic base was more inspired than the GOP base, then Busby should have garnered a higher percentage (even if the actual vote totals were smaller). A long-time Democratic Party worker took Markos to task and said that there was no way that Busby could have gotten a bigger vote than Kerry because it was a special election, and special elections always have low turn-outs. Markos tried a couple of times to explain that he was talking about percentages, but couldn't get it to stick. Amid general and growing grumbling in the audience, Markos gave up and moved the discussion to other topics. It was an exasperating incident and a microcosmic representative of a larger problem, I think.

One attendee wanted to know whether web tools and modern communication could be used to shut down the country in one-day wildcat strikes, such as one he had witnessed in Italy a few years ago. Markos described the idea as old-style politics, the sort of thing that might have worked when labor unions were strong. However, the protests against anti-immigration legislation provided a modern model of activism in which self-organizing groups had spilled into the streets in big demonstrations that attracted media attention. Markos was pretty certain that the mass media of today would shrug its collective shoulders at an effort to call a national strike, but they were nonetheless fascinated by the scope of the national protests on immigration policy. The media are unfortunately hung up on spectacle, but if it takes stunts to get their attention, then stunts must be provided. He recounted how the office of Senate Democratic Leader Harry Reid has complained to him that no one covered their press conferences, to which Markos replied that press conferences were too ordinary and dull to attract the desired attention. A better example, unfortunately not yet repeated, was Reid's shut-down last year of the Senate, which was a dramatic gesture that no one could ignore. That's the sort of media-savvy approach the Democrats need today. And that's the kind of thing that Markos and his netroots allies are trying to provide.

Markos gave one example of the power of net media that I had difficulty following because it was full of names I didn't recognize. His good friend Tyler Bleszinski operates Athletics Nation, a blog devoted to the Oakland Athletics baseball team. Apparently there was a furore over the owner's decision to trade a couple of pitchers. Markos said that the uproar faded away quickly when the usual sports media were bypassed and some guy named Billy Beane went directly to Athletics Nation to lay out the reasons for the decision. Once the hardcore fans were placated, the air went out of the “scandal” balloon. (Full disclosure: The only professional sports event I ever attended was an Oakland Athletics home game at the Coliseum. I think the other team was the New York Yankees, but I'm not sure. It was a family outing back in the days when I was a teenager and I was dragged there by my father, who found it difficult to comprehend why this special “treat” bored me to tears. I spent the entire game reading a copy of the Oakland Tribune, which I was able to get from a news rack in the stadium. I read it cover to cover, including the classified ads, skipping only the sports section. Ah, purgatory!)

A recurring theme of Markos's presentation was that only close attention to day-to-day work can lead to success in the long run. In the shorter term, get out there and vote on Tuesday if you're in California or another primary election state. There's Francine Busby's election in CA-50 as well as propositions and candidates to vote on. And don't neglect the down-ballot stuff, because long-term plans are built in short-term stages, and one of the most important short-term considerations is who we choose for school boards and city councils. As Markos warned us, those candidates will be tomorrow's congressional and gubernatorial candidates. If we make sure progressives win today, they can provide the strong bench we need for success in the future.
Posted by Zeno at 8:42 PM