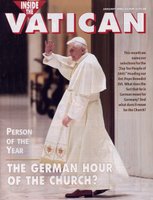 It's not persecution if you deserve it

Inside the Vatican is a magazine of news and commentary from the traditionalist end of the Roman Catholic spectrum. The members of its editorial staff are champing at the bit for a universal indult (permission) to celebrate the Tridentine Latin mass in all Catholic venues around the world. They are perhaps a bit disappointed that Benedict XVI has not used the first year of his papacy to rush back toward the Ultramontane days of Pius XII, but their hope springs eternal.

The writers and editors of Inside the Vatican detect a wariness—or even an outright hostility—toward the Catholic Church among their fellow journalists. Witness this excerpt from an article titled The Media and the Question of Responsibility in the May 2006 issue:

Inside the Vatican subscribers are doubtless familiar with horrendous accounts of how certain leading newspapers and magazines, notably in North America, constantly assail their readership with editorials and other features dealing with priestly malfeasance. Although their cause is fuelled when their content is based factually, both balance and perspective often become casualties when such reporting is as harsh as it is relentless. There seems to be a determined overall objective behind what may be tantamount to media assault: to completely distort and devastate Catholicism's credibility.

The writer of those words, Father Bernard O'Connor of the Vatican's Congregation for Eastern Churches, genuflects briefly toward reality when he admits that stories of priestly sins are “based factually,” but he quickly invokes the notion of a media-wide conspiracy against the Roman church.

I get your point, Father, but concordance is not the same thing as collusion. The pious plea for “balance and perspective” is a reversion to the relativist excuse that other people are guilty of the same crimes you're accused of. That is hardly good religious practice. The mass media focus on the priestly pederasty scandals not simply because there is an animus against the Church (even though I stipulate that it exists in many quarters) or because journalists conspire together (although they are certainly copycats who hasten to jump on each other's lead stories). It is because the tale of priestly sins is irresistible. Frail humans enjoy few things more than the toppling of authority figures, all the more so when stern finger-waggers are discovered to be committing the sins against which they inveigh.

Father O'Connor is by no means alone in his defensive posture. Honduran Cardinal Oscar Rodriguez Maradiaga, considered a contender in last year's papal conclave, denounced media coverage of “sexual scandals that happened forty years ago.” Maradiaga declared that forces opposed to a Palestinian homeland were exploiting the priest scandals to divert attention away from “injustices directed against the Palestinian people.” An obviously anti-Semitic subtext provoked an uproar and Maradiaga hastily apologized.

The winner of the last papal election is, if anything, even more direct than his erstwhile rival. Before his selection as John Paul's successor, Cardinal Ratzinger made a very clear statement.

At the height of the scandal of priestly pedophilia in the United States, he blamed the uproar on a media conspiracy. “I am personally convinced,” he told an interviewer, “that the constant presence in the press of the sins of Catholic priests, especially in the U.S., is a planned campaign.”

Such foolishness beggars the imagination, but I'll not question the pope's sincerity in voicing his delusion. He says “a planned campaign,” indicating that he really believes there is some kind of formal agenda and coordinated action in the media barrage.

Get a clue, Your Holiness. Reporters were climbing all over themselves to ferret out and document the details of the priest scandals because the scandals were news of the most compelling kind. The Boston Globe didn't produce its multiple-part series titled Betrayal because it had an anti-Catholic agenda or had received orders from some conspiracy's central committee. The Globe published it and numerous earlier stories because the Roman Catholic cardinal of the archdiocese of Boston, the ironically named Bernard Law, protected molester priests and shuffled them about to hide them from the legal authorities. Cardinal Law was not, unfortunately, alone in that effort. Many prelates saw a higher priority in protecting Holy Mother Church from scandal than in protecting the children of their parishioners from predators in clerical garb. The hierarchy richly deserves the condemnation which came its way.

We sometimes hear that similar scandals have occurred in other religious denominations. No doubt that is true, so where are the articles and headlines about abuses by Protestant clergy? (How soon people forget Jimmy Swaggart, Jim Bakker, and Peter Popoff.) To the Catholic clergy who deplore the disproportionate coverage, permit me to suggest that you can't have it both ways. If you and your predecessors spend many hundreds of years holding up the banner of “the one true church,” don't complain when your faults attract more attention than those of the also-rans. To quote some of the priests who tried to face down their accusers: “You asked for it.”
Posted by Zeno at 11:28 AM

I fully agree with the sentiments that you have expressed in your entry. The sexual abuse scandal pervades the Catholic Church and not just in the US. I have a very interesting entry in my own blog comparing the situation here to Ireland.