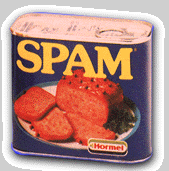 They serve me rancid spam

I love all my family members, of course. Even the ones whose fingers I want to break. You know which fingers, too. The fingers that tap the Forward button in their mail-readers and choke my in-box with indigestible spam. The poor dears have poor impulse control. And deep-seated gullibility. One of my cousins even forwarded me the message that said Microsoft and AOL would send us cash if we forwarded enough chain e-mail. Gullible? Heck, that's cow-kick-in-the-head stupid!

Bending over backward to be fair, I must admit that most of the junk caught in my spam filter is from non-family sources. So far none of my cousins, siblings, nieces, or nephews have sent me fliers about increasing my penis size or alleviating erectile dysfunction. Nor have they forwarded any appeals from Miriam Abacha to help her smuggle millions of dollars out of Nigeria—this one is so old it used to show up on paper in our snail mail! But I sure wish they would learn to visit snopes.com before they forward another single piece of e-mail! I've grown weary of trying to stem the deluge by sending back links to one or another of the urban-myth-busting pages at Snopes, but the lesson doesn't seem to take.

Perhaps even more noisome than the scam mail are the “inspirational” messages intended to bring me closer to God and make me one with the universe. These reek. They're poorly written compilations of sticky-sweet sentiments that make my gorge rise, and they always end with the exhortation to share the message with ten, twenty, or thirty friends (friends I long to get rid of, no doubt). Such e-mail is as encrusted with accretions as Magellan's vessel was encrusted with barnacles after its circumnavigation of the globe. The accretions come in the form of multiple headers (mostly dozens of e-mail addresses) that push the actual message down several screen pages and paragraphs added by the forwarders (who extol the most mindless dreck as brilliant or even divinely inspired; check out the cloying “Christian alphabet” if you doubt me. It's quite popular).

Last year my niece “Becky” favored me with a lengthy and aggravatingly inaccurate list of supposedly outrageous assaults against devout Christians. Becky is a naïvely observant Catholic girl who practices an unexamined faith. No doubt I neglected my duties as her godfather. I tried, however, to rise to the challenge of Becky's message and sent back a detailed refutation of every major point it contained. Mind you, she had written none of it herself. She merely forwarded it to a lengthy roster of family and friends. No doubt after I used “Reply to all” to answer her message, Becky was begged by her correspondents to leave Uncle Zeno out of future mailing lists. 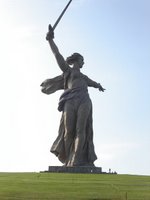 A compilation of falsehoods

The forwarded message from Becky is blocked off in quote format, while my comments are in plain text. I've left in the various misspellings and infelicities just as they occurred in the original message.


In light of the many perversions and jokes we send to one another for a laugh, this is a little different: This is not intended to be a joke, it's not funny, it's intended to get you thinking.

Billy Graham's daughter was interviewed on the Early Show and Jane Clayson asked her "How could God let something like this happen?" (regarding the attacks on Sept. 11).

And being the gentleman He is, I believe He has calmly backed out. How can we expect God to give us His blessing and His protection if we demand He leave us alone?" 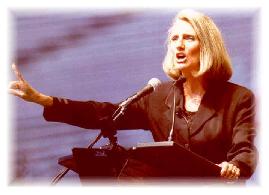 Dear Becky: I get lots of stuff in forwarded e-mail. Most of it is wrong, just like this one about Anne Graham Lotz (that's her full name). Yes, Mrs. Lotz was on The Early Show right after the terrorist attacks in 2001 and made remarks similar to the ones attributed to her, but her observations are neither profound nor insightful. They're just the usual “we need to pray in school” nonsense. Keep reading and I will show you why I say this is nonsense.


In light of recent events...terrorists attack, school shootings, etc. I think it started when Madeleine Murray O'Hare (she was murdered, her body found recently) complained she didn't want prayer in our schools, and we said OK.


Madalyn Murray O'Hair (that's how her name is actually spelled) was an atheist who was offended that her children were required to recite prayers in a public school. She argued that religious instruction was not the business of the state and won her case in 1963. The decision did not, however, make it illegal to pray in schools. It made it illegal for the teacher or anyone else representing the school to make you pray. There's a difference. You can pray in school any time you like, especially before exams. Think about it. If you believe praying in school is against the law, you are wrong. Even so, you can take comfort in the fact that O'Hair's son later decided he was a Christian anyway.

The same thing is true about the Bible. You can take a Bible to school in your backpack and read it during free times. There's nothing wrong with that. Do some teachers think you shouldn't do that? Sure, but that's mostly because people keep yelling about how awful it is that it's banned, so lots of folks believe it is. It's not. In fact, the U.S. Department of Education published guidelines in 1995 that clearly stated, “students may read their Bibles or other scriptures, say grace before meals, and pray before tests to the same extent they may engage in comparable nondisruptive activities.” Read the whole thing for yourself in the department's on-line archives. (By the way, did you notice the year that the guidelines were published? It was right in the middle of the Clinton administration. That's right: the godless Clinton administration.) 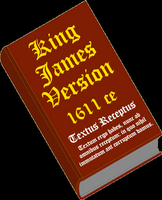 Now some people are upset that teachers no longer lead Bible readings in public school classrooms. Therefore they are working to slip the Bible back in under the guise of education about the Bible instead of as religious instruction. Roman Catholics should be especially careful not to fall for this. The Texas Freedom Network Education Fund has issued a report titled The Bible in Public Schools. Check it out (warning: it's a 700K pdf). The most popular Bible curriculum for public schools is from the National Council on Bible Curriculum in Public Schools. It teaches that the Bible has exactly 66 books. Catholics don't believe that. The lessons are all about a Protestant version of the Bible: the King James Version.

If you want your kids to pray and read the Bible, then teach them your prayers and how to read your Bible, not whatever version gets smuggled into school lessons. People who think the government interferes too much with their lives sure have a blind spot when it comes to thinking that religion belongs in the public schools.


Then Dr. Benjamin Spock said we shouldn't spank our children when they misbehave because their little personalities would be warped and we might damage their self-esteem (Dr. Spock's son committed suicide). We said an expert should know what he's talking about. And we said OK.

Now we're asking ourselves why our children have no conscience, why they don't know right from wrong, and why it doesn't bother them to kill strangers, their classmates, and themselves.


Dr. Benjamin Spock never said you should not discipline your children. Who claimed he said this? Spiro Agnew. Remember him? (He's bit before your time.) He was Nixon's original vice president, who resigned in 1973 over corruption charges (he took bribes). Agnew was assigned to attack Spock because Spock was an anti-war activist during the Vietnam era. Agnew blamed Spock for hippies, drug culture, and campus unrest. The vice president and his political allies sneeringly described young activists as members of a Spock-marked generation. 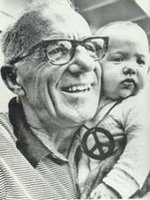 In reality, Dr. Spock emphasized that discipline was a crucial element of parenting, but that it should be done lovingly instead of threateningly. Some of his comments on disciplining children are on-line. You can see how he specifically tells people to be firm in their decisions instead of letting their children do whatever they want. Still, lots of people today think that Dr. Spock said children should be allowed to run wild. Did you think that, too? Then you were wrong. You fell for a lie told by a convicted criminal.

Oh, and by the way, neither of Dr. Spock's sons committed suicide. That's another lie. Or, if we want to be more charitable, just one more foolish mistake spread around by people who don't check their sources.


Probably, if we think about it long and hard enough, we can figure it out. I think it has a great deal to do with "WE REAP WHAT WE SOW."

Funny how simple it is for people to trash God and then wonder why the world's going to hell. Funny how we believe what the newspapers say, but question what the Bible says.

Funny how you can send 'jokes' through e-mail and they spread like wildfire but when you start sending messages regarding the Lord, people think twice about sharing.

Funny how lewd, crude, vulgar and obscene articles pass freely through cyberspace, but public discussion of God is suppressed in the school and workplace.

Funny how when you forward this message, you will not send it to many on your address list because you're not sure what they believe, or what they WILL think of you for sending it. Funny how we can be more worried about what other people think of us than what God thinks of us.

Pass it on if you think it has merit. If not then just discard it... no one will know you did. But, if you discard this thought process, don't sit back and complain about what bad shape the world is in!!


I thought about it, all right. No, it doesn't have any merit. And I certainly won't pass it on.

Don't trust forwarded e-mail, sweetheart. You may have thought you were passing along some valuable information, but it was a tissue of errors and distortions. The references I've provided make this quite clear. You're being taken advantage of by people with a political agenda, people who use propaganda to get you all excited and upset about things that aren't even true. Don't fall for it!

Your uncle & godfather,
Zeno
Posted by Zeno at 4:12 PM

I got myself partially off one of those family lists by (very objectively) remarking on the bigoted nature of a Christian-vs-Muslim letter and hitting 'reply all'. I got a lot of angry comments from people I don't know, but the good(?) news is now I only get forwarded jokes.